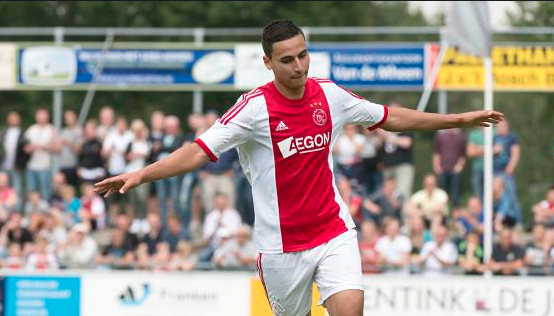 After the exit of key first team players Daley Blind and Siem De Jong this summer, Ajax seem to be light on their feet for both confidence and leadership. For only the second time in the Frank De Boer era, Ajax have lost two consecutive Eredivise games leaving them in a spot of bother and six points behind fierce rivals PSV Eindhoven.

However if there’s been any positivity flowing in and around the Amsterdam Arena it’s been the introduction of 19-year-old Anwar El Ghazi.

After two instrumental appearances from off the bench El Ghazi was granted the opportunity to prove himself from the get go against Ajax’s biggest rivals PSV Eindhoven.

Despite losing the game 3-1 El Ghazi did again score and an impressive goal nevertheless. It was another fantastic impact from El Ghazi where he continued to boast his unique ability, especially his capability to beat a man and play in a deadly ball. In hindsight he was arguably Ajax’s best player in a game that promised so much, but delivered such disappointment.

After a second-rate performance against PSV, Ajax were looking to get back on track against an FC Groningen side who had enjoyed a blistering start to the season; it was always going to be a testing fixture for Ajax, but Ajax were left seriously hampered. Groningen were the better side against an Ajax team that looked deprived of leadership and looked empty without the experienced Daley Blind to help dictate the play and control the team, but again El Ghazi did impress.

If there’s any positives to be drained out of consecutive miserable performances it’s the young talent of El Ghazi. Little money was spent on adding to the squad this summer and after a few big exits, it can only be presumed Ajax are happy with using their youth for this season. El Ghazi being one of the youth products that Ajax were happy to implement in the first team and he has repaid the favour by giving it his all and contributing to the team as best he can.

Another interesting trait in El Ghazi’s game has been his range of skills to beat defenders and this un-predictability in his game has excited the Ajax fan-base and Dutch football as a whole. The Ajax youngster has also showcased his potential to play in any forward position by not only having the requisite passing ability, but also having an eye for goal.

It looks as though El Ghazi will be relied up on to produce some goals this season, as he has been given a license to come inside and join the centre of play, allowing him to open up his body and possibly even use his left-foot to shoot at goal.

Anwar El Ghazi has been a revelation in the early season for Ajax and if he continues where he left off from just before the international break he is set to cement his place in the Ajax team; out on the right where he seems to be most comfortable.

Ajax’s philosophy has always been to implement youth and mix it with their squad, their trust has always been in their youth; but now they may have to formally rely on youth if they are to get back on track and compete against title favourites PSV Eindhoven.