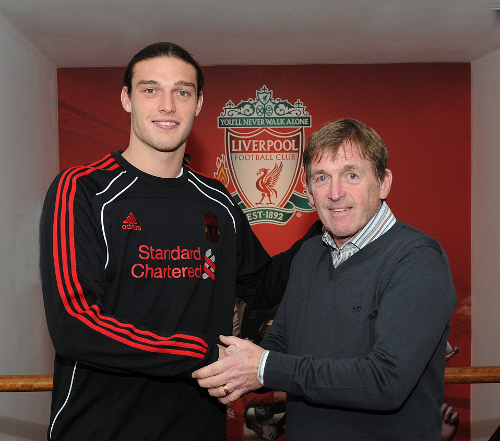 Andy Carroll joined the pantheon of fabled Liverpool FC strikers last night for the princely sum of 35 million pounds following his surprise transfer from Newcastle United. Like former Anfield legends Ian Rush and Fernando Torres before him the Geordie striker is set to don the number nine jersey and has been tasked with scoring the goals to propel Liverpool back into Champions League contention alongside fellow new signing Luis Suarez from Ajax.

The 35 million pound transfer of Carroll – who has only 72 minutes of international football under his belt – appears a massive gamble for Kenny Dalglish, as the former Newcastle hit-man is still untried at the top level of club and international football. Only time will tell if bringing in an injured Carroll for the now departed Torres was the correct move for a club desperately short on quality striking talent.

Yet if Liverpool had 35 million pounds to spend then why not purchase a more experienced striker like say, Diego Forlan, who has regularly clicked up front with Suarez for Uruguay? The fact Forlan previously played for arch-rivals Manchester United should not have been a deterrent and his experience would have proven invaluable in what promises to be a tough run-in to the season as Liverpool attempt to finish as high up the table as possible.

In Carroll, Dalglish has gone for youth over experience, an un-cut diamond over a proven international striker and an individual whose off-field excursions involving a bar stool already make him a handy target for the tabloids before he even kicks a ball for his new club. Granted the inflated fee had a lot to do with the timing of the transfer as well as Carroll being English (just look at the money Darren Bent has cost in recent years) but if the former Newcastle United striker goes on to form a successful partnership with Suarez then the painful memory of losing Fernando Torres will quickly dissipate.

It is a big ‘if’ and 35 million is an awful lot of money for Liverpool to put their faith in Andy Carroll. An article detailing Carroll’s upset with being ‘pushed out the door’ at Newcastle published this morning may alarm Liverpool supporters.

Carroll Text: “They have kind of said we don’t want u but want me to say I wanna go. And I said I don’t wanna go.”

The thing is with Carroll it is going to take time to settle in, acclimatise with his new surroundings, and work on a partnership with his strike partner. Even though the 2010/2011 season is already something of a write-off Liverpool cannot rest of their laurels as they attempt to scramble back into the top four / five of the Premier League. An experienced purchase to partner Suarez up front would appear to have been the more sensible option even though under the guidance of Dalglish and Clarke the Geordie giant will only improve as a player but it is going to take time.

The transfer says a lot about the current mindset of the club as Dalglish is unlikely to have been granted such a generous transfer kitty by the club’s new owners unless he intends on remaining on as manager for the foreseeable future. For all Dalglish’s storied career as a previous Liverpool player-manager the success of the players purchased in this January 2011 transfer window will dictate his success or failure as manager second time around.

Torres’ departure has hurt Liverpool not because he joined Chelsea but because of why he joined Chelsea. The Spanish international’s comments about linking up with a ‘big’ club who are better equipped to challenge for trophies is the most damning remark about his and many other’s opinion of Liverpool FC’s current inability to challenge for top honours.

“I’m really happy and I’m sure I’m doing one of the biggest steps forward in my career, joining a club like Chelsea. This is the target for every footballer, to try to play for one of the top clubs in the world. I just want to be at the level I’m supposed to stay at” were the words uttered by the new Chelsea number nine last night.

The signing of Andy Carroll represents a dangerous but necessary throw of the dice for a club never accustomed to making such gambles at this time of the year. Liverpool’s previous talismanic striker left Anfield to pursue trophies and the burden to replace Torres and score the goals at the highest level now falls in the broad shoulders of a young Geordie.

Andy Carroll’s success or failure as Liverpool’s new striker will have a direct bearing on how quickly Liverpool return to the top table of English and European football, if at all.