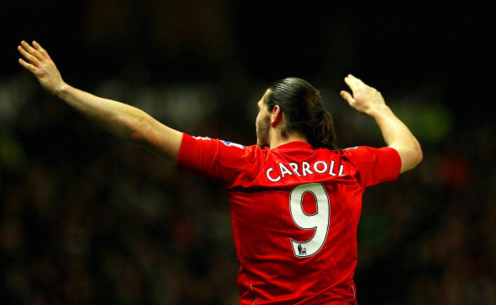 Liverpool manager Kenny Dalglish should start Andy Carroll in every league game from now until the end of the season.

It seems like an odd proposal, to play an underperforming striker with just three league goals to his name in 25 appearances this campaign. Not only can he not score but big Andy’s first touch can be incredibly inept, he frequently fails to make runs into the box when Liverpool are in possession near the opposition area and he has missed some glaring goalscoring opportunities. Dalglish wants his side to play quick, fluid football that is ill-suited to the Geordie’s style of play.

Yet, Andy Carroll should be the second name on Dalglish’s teamsheet, right after Luis Suarez. Why? Because the stats indicate that Liverpool and their most dangerous player, the feisty Uruguayan, play better with Carroll in the team.

Liverpool have emerged victorious from 13 of the 21 games Andy Carroll has started, a 62% win percentage. Without Carroll included from the offset, the Reds have a paltry 38% win percentage from 21 games.

He can’t score and his ball retention skills leave a lot to be desired, so why are Liverpool gaining more points with the lumbersome £35 million flop starting? And that’s where Luis Suarez comes in.

Suarez should not be played as a lone striker. He is not clinical enough and constantly finds himself isolated. He has a dire shot to goals ratio and desperately needs the foil of another strike partner. Journalist Jen Chang tweeted that Suarez has scored twice and provided four assists in the last four games he started alongside Carroll. In the previous five games that Suarez started and Carroll didn’t, Suarez contributed no assists and scored twice, with both goals coming following Carroll’s introduction from the bench.

The mere presence of Andy Carroll impacts positively on Suarez’s game. The 23-year-old number nine draws defenders to him, creating more space for Suarez to exploit. When Suarez receives the ball with his back to goal and goes on one of his trademark dribbles he at least has the immediate option to use Carroll, rather than having to wait for the likes of Charlie Adam to waddle forward from midfield.

Take Suarez’s goal against Wigan last weekend, scored two minutes after Carroll was substituted onto the pitch. Suarez darted into the box ahead of his marker. There was a defender ahead of him, but he couldn’t block the run of Suarez as it would’ve left Carroll free just yards from goal. Gerrard proceeded to feed the ball to Suarez, who tapped in from close range. Take Carroll out of that situation and there’s no goal. Getting bodies into the box has been a big problem for Liverpool this season and that problem is amplified when Suarez plays as a lone striker. Throw Carroll into the mix and, regardless of how poor he is playing, he will distract defenders.

Besides presence, the one positive attribute Carroll has proved he possesses since arriving at Anfield is his aerial prowess, which is perfect for a speedy striker like Suarez to take advantage of. Carroll has claimed assists with his head for Craig Bellamy and Dirk Kuyt relatively recently, via long punts from Pepe Reina, and there’s no reason why he can’t do the same for Suarez.

It’s worth noting that Suarez plays the main striker role for Uruguay quite often and quite effectively. Of course, they key word in that sentence is main, rather than lone. Uruguay can boast an attack consisting of Edinson Cavani and Diego Forlan, world class players. Andriy Voronin could set the world alight alongside those two. All Liverpool have to offer Suarez is Stewart Downing and Jordan Henderson or an out-of-form Dirk Kuyt. These three players have failed to connect with and provide for Suarez when playing out wide. Maxi is another option of course, but he has been largely ignored by Dalglish and Craig Bellamy’s injury problems prevent him playing as often as one would hope.

Of the two systems that Dalglish uses, the stats indicate that pairing Suarez with Carroll is more effective than a 4-5-1. Liverpool are struggling to consolidate 7th place, which is a quite pathetic showing considering the spending over the summer. If Dalglish wishes to save some face by finishing above bitter rivals Everton and perhaps catching Newcastle he must utilize Luis Suarez to maximum effect and Andy Carroll is the unlikely answer to that problem.

And who knows, a prolonged run in the team could even bring the best out of Carroll, who has yet to start more than four games consecutively for Liverpool.