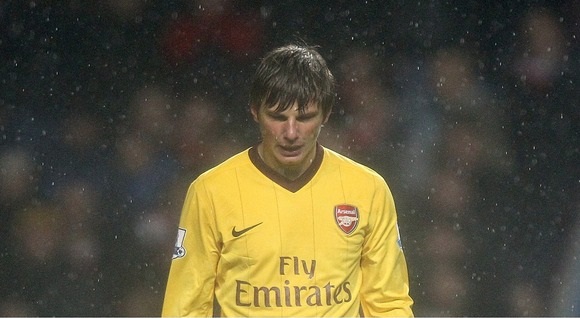 Of course, the rush to seal moves after international tournaments means they are often impulsive and based on a mere four or five games of casual scouting.

When Arshavin eventually joined Arsenal for £13.3 million in January, 2009, though, few would have dared to have suggested the Russian was anything other than a coup.

After all, not only had Arsenal outlasted Barcelona and Tottenham in a frustrating, eight-month bidding war, they had also captured a 27 year old at the peak of his powers and with tangible pedigree.

Arshavin had consistently starred for Zenit St Petersburg, playing a pivotal role in the club’s greatest era for over twenty years – culminating in the landmark UEFA Cup and UEFA Super Cup double in 2008.

Far from a big fish in a small competition, either,  Arshavin, in actual fact, had looked even more impressive in a Russia shirt during this time and again raised his game, for Euro 2008.

Despite playing just three games – owed to a two-match suspension at the start of the tournament – Arshavin, with trademark nonchalance, firmly established himself as one of Europe’s hottest properties.

Two goals, two assists and two man of the match performances in these three games reflected this fact.

Also, trickery, spatial awareness, a low centre of gravity, composure, a great turn of pace and the ability to cut inside to great effect suggested that Arshavin had the varied box of tricks to revel in Europe’s top leagues.

Consistency did not seem an issue, either: Arshavin , as a free-roaming number ten, had finished with double goalscoring and assist figures in three of his previous four seasons with Zenit.

Perhaps, more importantly in adjusting to a radically new environment – reflected in Arshavin flying his own stylist into London from St Petersburg – determination has always been a massive part of Arshavin’s make-up.

From undergoing strenuous rehabilitation after being hit by a car as a child to vowing to complete a taxing degree in fashion design just as he was breaking into Zenit’s first-team, Arshavin looked far from a high-risk gamble by Arsène Wenger.

After all, having been mesmerised but eventually stung by José Antonio Reyes in 2004, Wenger had rarely turned to big-money names in the intervening period.

Arshavin, at 27, seemed a safe bet and given how the first four months of his Arsenal career panned out, it seemed that, finally, Arsenal had found a consistent game-breaker in the post-Henry era.

From, infamously, netting all four goals in Arsenal’s 4-4 draw away to Liverpool on 21 April, 2009 to giving an impressive captain’s performance – in winning a penalty and setting up two goals – in Arsenal’s 0-3 victory over Portsmouth on 2 May, 2009, Arshavin re-invigorated a stuttering Arsenal campaign.

It seemed, as Wènger would go on to comment, that Arshavin knew how English football worked and his good form continued – not just encapsulated in the brilliant 25-yard opener against Manchester United on 29 August, 2010, but, also, a less-heralded performance against Stoke on 5 December, 2009.

Having to fill in for the injured Robin van Persie was one thing, but having to do it against the tight marshalling and giant stature of Abdoulaye Faye and Robert Huth was another.

Tbe diminutive Arshavin, though, revelled as a second striker and assisted and scored a goal in Arsenal’s eventual 2-0 victory.

There seemed little stopping Arshavin, winning a man of the match award and scoring, again, against Liverpool on 13 December, 2009 but a seemingly ‘routine’ calf strain suffered against Barcelona on 1 April, 2010 marked a turning point in Arshavin’s Arsenal career.

From the emergence of Alex Oxlade-Chamberlain and the vocal disquiet of Arsenal’s fans to incessant rumours about Arshavin leaving his long-term girlfriend and two children, the past eighteen months have been chaotic for the Russian.

His weight has fluctuated, the tricks have become predictable and the dramatic dips in form have never been fully eradicated, despite the odd promising performance (Wigan on 29 December, 2010).

Perhaps, more worryingly, Arshavin’s application and professionalism in training – regardless of what Wenger conveniently maintains, despite not playing the Russian since 20 January, 2013 – has regressed.

It seems that the Russian has fallen out of love with football – far from the rosy-cheeked, one-time Ballon d’Or nominee, who gushed about the ideals of Johan Cruyff when linked with Barcelona in 2008.

Given that Arshavin was once one of Europe’s hottest properties, there is no doubting that – with the Russian departing Arsenal without any silverware and with just 11 appearances from a possible 47 this season – his career will go out on a mere whimper.