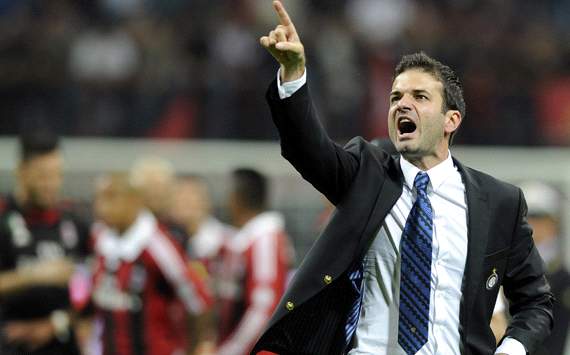 When Rafael Benítez took over from José Mourinho at Internazionale in the summer of 2010, the Spaniard sought to purge I Nerazzurri of all of its Special elements.

With the pressure of “winning with my team”, as Mourinho so infamously taunted, a paranoid Benítez took down newly-framed pictures of Mourinho and his Champions League hoist.

However, more tellingly, Benítez failed to acknowledge that Mourinho had left a legacy that, if carefully tweaked over the coming seasons, could lead to Inter remaining a consistent and dominant force in Europe.

Given Benítez’s direct and industrious playing style at Liverpool, his crusade to erode the ill-advised notion that all eighteen Serie A teams use a catenaccio playing style was particularly bizarre. Benitez, in Mourinho’s words, was “contaminated” by the pressure of moving away from a successful blueprint and history-defining achievements.

It is a taunt that has dogged other silverware-laden, meticulous managers in trying to veer away from Mourinho’s club-defining legacies so, perhaps, it has been little surprise that humble figures like Avram Grant, Guus Hiddink, Carlo Ancelotti, Roberto Di Matteo (2011/2012) and Andrea Stramaccioni realised the importance of retaining Mourinho’s unrivaled foundations.

Stramaccioni is the most interesting managerial casestudy of the above-mentioned as although the Italian was a youth coach at Internazionale during Mourinho’s two-year spell at I Nerazzurri, he did not come into direct contact with Mourinho and was never required by the Portuguese at Inter’s Appiano Gentile senior training complex.

Also, unlike other Serie A ‘rookie’ successes like Vincenzo Montella or Antonio Conte, Stramaccioni had no senior management experience before taking on a job at one of Italy’s biggest clubs.

Yet, this indirect contact was, and is, the perfect basis for a powerful consultancy bond between Mourinho and Stramaccioni:

I have been listening to Mourinho’s advice and I thank him for it. We have never met in person, but it is a pleasure just to talk with one of the best managers in the world.

Undeniably, after five managers in three seasons, Inter have finally found a long-term replacement for Mourinho in the suave Italian and, unsurprisingly as a result, Stramaccioni shares Mourinho’s positive traits without being the naive dressing-room pushover some feared he may have been in stepping up to senior management.

In sharing the same calculated logic, winning mentality, last-minute rallies, connection with fans, dynamic tactics, group-focus and passion, Stramaccioni has carried on with Mourinho’s one-time short-term project seamlessly and, remarkably, that is with a squad where just eight of the twenty-three members played under Mourinho’s meticulous methods from 2008-2010.

Also, in striking a delicate balance between moulding his own squad and retaining the placid, non-controversial methods that made him a Nextgen champion with Inter’s Primavera in 2010, Stramaccioni has widespread appeal in Italy.

After all, his story reads like a script from cinema italiano, with the Rome-man’s playing career as a promising centre-back ended by a crippling knee injury as a nineteen year old with Bologna in 1994/1995.

Far from falling out of love with the game, though, Stramaccioni became a youth coach with Roma from 2005 and joined Inter as manager of their Primavera youth side.

Thus, it was fateful that Stramaccioni’s greatest career moment – winning the inaugural NextGen tournament on penalties against Ajax on 25 March, 2012 – up until that point came on the day when Claudio Ranieri managed his final game for Inter in a 2-0 defeat in the Derby d’Italia to bitter rivals, Juventus.

However, reflecting just how raw a managerial name Stramaccioni was, Mario Balotelli’s upstaging of his unveiling press conference showed what a gamble this was – even with Giuseppe Baresi, Mourinho’s one-time number two, returning as assistant.

Indeed, it was a curious appointment by Massimo Moratti’s standards, given that he rarely trusts caretakers and turned to middle/post-middle aged figures like Gian Piero Gasperini, Leonardo, Benítez and Ranieri in Mourinho’s aftermath.

This was far from a firefighter appointment, though; rather, it was a shrewd experiment by Moratti – like Joan Laporta with Josep Guardiola in the summer of 2008 – in a desperate aim to freshen up a desperately stagnant Inter squad.

Perhaps, for a wider footballing audience, this crystallised in the brilliant 1-2 victory away to Juventus on 3 November, 2012, where Inter ended Juventus’ incredible 49-game unbeaten run and moved within four points of the champions in the Serie A table.

Certainly, it was Mourinho-influenced – be it the incessant marshalling of Andrea Pirlo by Rodrigo Palacio/Freddy Guarin or Stramaccioni slamming Juventus’ pre-match taunts of him being “tactically carefree” – but the Italian also showcased his own individual merits in the cauldron of the Juventus Stadium.

Refusing to stoke talk of refereeing controversies that have often dominated the Derby d’Italia and boldly playing with three strikers, Stramaccioni’s proactive style is far from naive and this is much-owed to his incredibly detailed pre-match preparation, analysis and drilling.

Basically, despite his 36 year age and being three years younger than the dressing-room general Javier Zanetti, Stramaccioni’s refreshing vision has won over the whole squad and even boisterous, proven internationals like Antonio Cassano are showing immense gratitude and hunger.

While some may be reserved about buying into the hype over Stramaccioni – particularly given the similarity of the Special One comparisons that André Villas-Boas eventually struggled with at Chelsea in 2011/2012 – he has shifted a one-time directionless, nostalgia-laden Internazionale in the final days of Ranieri’s reign into one of the most intriguing, well-moulded sides in Europe.

It is not just the previously-recorded nine straight league wins that makes Stramaccioni an impressive prospect, though. After all, given his level-headedness and gratitude for the opportunity to manage Internazionale, Stramaccioni is in it for the long haul and it would be no surprise for him to continue to blossom tactically and lead I Nerazzurri to their first major trophy since 2009/2010 in the coming years.