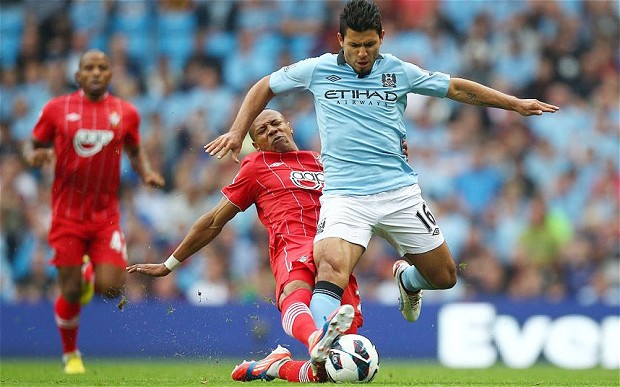 Manchester City narrowly brushed past a resilient Southampton side on Sunday afternoon in an end-to-end game that saw the Premier League champions come from behind to seal all three points with a 3-2 home win.

A timid start to the game saw both sides share equal amounts of possession, with the game boasting a very end-to-end first-half display from the two clubs.

The game’s opening goal came in the form of a Carlos Tevez run, the Argentine did brilliantly to break into the Southampton box before cooly slotting a low-pass into the back of the net.

Rickie Lambert’s first goal as a Premier League player provided Southampton with the equalizing goal on the hour mark. A quality thump from just inside the City box was enough to fire the Saints level with the title holders.

Steven Davis made it 2-1 to Southampton with 20 minutes still left to run, but an Edin Dzeko equalizer just minutes later followed by a Samir Nasri goal soon after that sealed the victory for Manchester City in emphatic fashion.

Premier League newcomers Southampton saw a full-strength side travel to Manchester’s Etihad Stadium, with the home side putting forth a strong starting eleven, with Kun Aguero starting up front with Tevez, the biggest inclusion on the bench was Italian international Mario Ballotelli, who eventually made an appearance later on in the match.

After coming on to replace an injured Aguero, Edin Dzeko teamed up with fellow-striker Tevez in impressive fashion during the first half, with the duo producing some excellent teamwork up front.

Southampton’s defensive offering must not be shunned however, their back four of Clyne, Fonte, Hooiveld and Fox proved invaluable for the Saints at times by putting pressure on the Manchester City front two of Tevez and Dzeko.

The home side failed to reply with any particular aggression following Lambert’s 59th minute leveller. Roberto Mancini’s men instead proceeded to sit back in muted fashion, with occasional attacking movements reaching the Southampton box.

The away side did well to continue their assault on Manchester City with a barrage of offensive assaults late on. A fantastic goal from Davis to make it 2-1 in Southampton’s favour acted as a wake up call for the home side, who then proceeded to score two in quick concession.

Southampton’s first game back in England’s top-flight has shown that the Premier League new boys are serious contenders for avoiding relegation this season. Their offensive tactics have proved to be well thought out and they definitely produce some goals, but to ensure a second season in the league they will need to work on their possession, which was only 20% for the second half.

Manchester City will surely take this result with mixed feelings, Mancini will undoubtedly not be pleased about conceding two goals against the run of play but I’m sure he will be pleased with their reaction following Southampton’s second of the game.