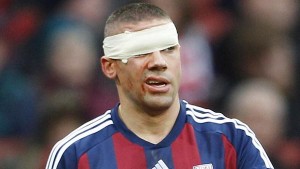 The Potters were looking to maintain their record of having not being beaten all season at their Fortress Britannia as they welcomed European champions Chelsea to Staffordshire.

The Blues would emphatically end the home side’s enviable record with a 4-0 win. Walters was one of the few City players not to go hiding at either end of the pitch on the day.

Unfortunately for the Republic of Ireland international, he was to set records for all the wrong reasons against the indomitable force that was Chelsea’s attack on the day. In the final minute of the first half, the striker tracked back into his own penalty area for the umpteenth time to defend a corner kick and with the match still scoreless Walters put the ball into his own net with an impressively acrobatic flying header.

Walters is not a player to go missing and he continued to fight against the blue tide. Just past the hour mark however, Walters was at it again however. When defending another set piece for the visitors, Walters rose highest in the box to head home a corner past Asmir Begovic. In doing so Walters became only the fourth player in Premier League history to score two own goals in the same game. He continued to hustle and harry at both ends of the pitch though.

That goal put Chelsea 2-0 up and the Londoners would continue to add two more goals late on to put them 4-0 ahead.

With the game ticking into injury time and Walters having never given up with an as ever combative performance, the Merseyside native managed to win a penalty for the home side. He proceeded to smash the resulting spot kick onto and over the crossbar to complete a statistically miserable day for him personally.

Slated by media and on various social networks in the immediate aftermath of the game, it was clear that the haters had not watched the game as Walters was by some distance Stoke’s best player on the pitch on the day.

If amends were necessary, Walters went on to do just that by scoring two goals in a win over Crystal Palace barely three days later.

Walters has continued to feature week in, week out for Stoke and as the club’s penalty taker. The hit man would however also miss the next penalty he took, when Mark Schwarzer saved his effort against Fulham at Craven Cottage a few weeks after the Chelsea misadventure.

Walters would continue to take the penalties for Stoke and battered home a crucial spot-kick against QPR, having been asked to retake it as Stoke took a major step to safety with a 2-0 away win a couple of weeks after scoring a penalty to equalise and then putting the Republic of Ireland 2-1 ahead against Austria in a crucial 2014 World Cup qualifier, though The Boys in Green were eventually pegged back by a last gasp David Alba strike.

This week Walters effectively secured Stoke’s survival in the Premier League as he banged home his eighth goal of the season to put Stoke one up at fellow strugglers Sunderland. Walters as ever was in the thick of the action when in the ninth minute he headed a corner kick in a crowded goalmouth which was blocked on the goal line by Danny Graham before the rebound fell to Walters who proceeded to smash the ball onto the crossbar and into the back of the net from five yards out with bodies flailing around him.

A win would have guaranteed Stoke’s mathematical safety but Sunderland eventually pegged back The Potters with a second half goal from fellow Republic of Ireland international John O’Shea securing a 1-1 draw and a share of the spoils. The point takes Stoke to a total of 41 and with two games to play, Tony Pulis’ side are now six points above the drop zone and can surely not now be demoted.

This is the fifth successive season that Stoke have successfully completed a Premier League and every season Jonathan Walters has played his part, playing an average of 37 (out of 38) games each of the last three seasons.

Back in 2006 Jonathan Walters was playing for League Two outfit Wrexham who, along with Walters, were in danger of slipping out of the Football League. The then 22 year-old had something of a drinking problem and he realised that his career was hitting an ever downward spiral.

With his football career appearing to be petering out, he got the wake up call he needed and it wasn’t long before he was transferred to League One outfit Chester City where Walters began to show his potential once more. He scored nine goals in 29 league games for The Seals as well putting in some impressive performances which drew the attention of several Championship clubs.

Then Tractor Boys‘ manager Jim Magilton signed Walters on a deal worth £150,000 plus add-ons in mid-January 2007, after Walters had impressed in FA Cup ties between Chester and Town earlier in the month. Having previously made four Premier League appearances for Bolton, Walters became one of only half a dozen players to have played in all four divisions of the Football League.

At the awards night for the 2007–’08 season, his outstanding season was recognised and was honoured with the Boxholders’ & Corporate Sponsors’ Player of The Year and Players’ Player of The Year awards. In October 2008, Walters signed a contract extension keeping him at the club until the end of the 2011–’12 season. Shortly afterwards he became club captain.

Walters’ form saw him monitored by several Premier League clubs and his rough and tumble style was perfectly suited to Stoke City who signed him on a four-year £2.75million transfer deal in August 2010, where he has been an ever present ever since.

His form at Stoke of course saw him called up to the Republic of Ireland senior squad having previously played at under age level and he earned his first senior cap as a late blooming 27 year-old in November 2010 in a friendly against Norway. He has gone on to become a regular in the team ever since and will spearhead the Republic’s attempts to reach next summer’s World Cup having featured at last summer’s European Championships.

Jonathan Walters is an old school never-say-die centre forward warrior who, as it happens, possesses no little skill. The diving/cheating antics of many of his contemporaries must frustrate him greatly. His experience really embodies the age old phrase  “If at first you don’t succeed, try and then try again.”  Surely a candidate for Stoke’s Player of the Season this season, it’s a pity there aren’t more like him at the top level of the modern game.

3 thoughts on “An ode to Jonathan Walters”