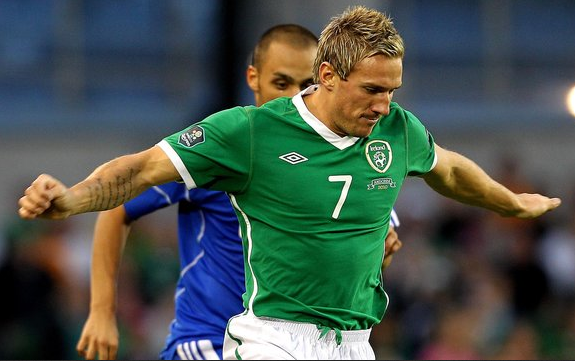 Liam Lawrence had little choice but to leave Portsmouth; he was one of the last to have to do so before the deadline kicked in for their rescue package to be afforded a chance to work last August.  From the south coast of England to the coast of a gulf in the Aegean Sea.  Greece’s second biggest city, Thessaloniki, and the city’s first club, PAOK Salonika, beckoned.

Lawrence, on making the move, stated,“I know I’m a long way away and out of sight but I’m hoping the manager {Trapattoni} hasn’t forgotten about me.”

If the FAI’s head honcho has to step in and tell the national teams manager he needs to travel to watch regular starters where nearly all his countrymen are plying their trade, what hope does Lawrence have.  Back to the DVD’s, you’d hope.

The last time Lawrence heard from Trapattoni was when he received a text message dropping him from an Ireland squad.  Lawrence had to look on at the Euros and wonder.  All though he must examine his own decisions too.  He openly stated in an interview in September that he shouldn’t have left Stoke City after losing his place.  And he’s right, he shouldn’t have.

The move to Greece had been going well though.  PAOK sit in second place in the Greek Super League, although Olympiakos are beginning to pull away from the chasing pack.

And Lawrence had been making an impression with his mixture of guile and more prosaic attributes.  His second league goal of the campaign came in a 4-1 home defeat of Aris but ended badly with a straight red card.  He served his suspension and then in another home game nearly three weeks later, a tight victory over AEK Athens, he again got dismissed for picking up two yellow cards and another suspension ensued.

This Sunday, Lawrence expects to start in his sides biggest and most relevant test of the season.  If the gap of eight points held by Olympiakos is to be cut, this weekend is the best place to start.  The home side welcome the league leaders in an early evening kick off.

The visitors will have Roy Carroll in goal and the league’s best attack – they have scored a dozen more goals then PAOK in eleven matches.

The chance to shine and the chance to endear himself to the Irish set up is now, in the circumstances, the stage set couldn’t be much bigger.

The only problem is, will any of those he is hoping to impress be watching?