Simply a revelation down the right-hand side.

After signing from Fleetwood Town in June 2021, Ipswich Town speedster Wes Burns has quickly become a fans favourite in East Anglia. His infectious energy and courage to try and make things happen in the final-third is a joy to watch, and a fine example to any young professionals out there to always play with personality on the pitch.

Improving on last season’s standout campaign, the 27-year-old has taken his game to a whole new level tormenting League One defences with his athleticism and trickery this season.

Contributing with 10 goals and 6 assists from 32 appearances the former Bristol City academy product is on course to complete the ‘double double’ in both categories, an achievement only currently held by MK Dons’ Scott Twine in League One (14 goals and 10 assists).

With the ability to feature as a right-wing back or in his natural right-wing position, Burns would offer Wales boss Robert Page depth and quality in more than one area.

Despite not being included in Wales’ 26-man squad, cries of ‘Wes will tear you apart again’ are bellowing out from the Portman Road terraces which will surely leave Page with no choice but to give Burns his first taste of senior international football.

Following the departure of former Blues boss Paul Cook in December, it’s safe to say Kieran McKenna formally a member of Manchester United’s first-team coaching set up, has transformed Ipswich bringing back a true identity which Town supporters can connect with.

The impact McKenna has had on Burns? Tremendous.

It’s important to acknowledge that Burns was already enjoying life in the famous blue jersey before McKenna’s arrival but the transformation in this new-look Ipswich side has also helped to elevate the former Fleetwood mans game.

First up on McKenna’s Ipswich check-list, a switch to a back three. With the Northern Irish man preferring two number 10’s behind a lone striker, McKenna set aside the right-wing back role for Burns who’s repaid the faith shown in him with a string of outstanding performances.

With versatile defender Janoi Donacien providing defensive stability, Burns is given the licence to get forward at every opportunity often getting into the opposition area for crosses. 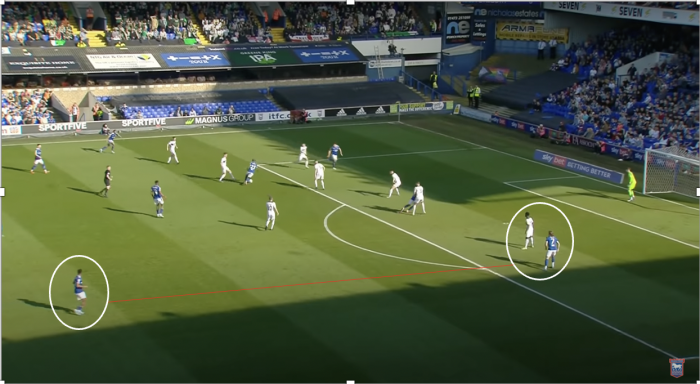 Located in the penalty area is Burns, who’s made his way forward from his right wing-back position as Ipswich look to threaten Plymouth Argyle. The position of Donacien is important, located behind Burns covering the Welshman’s vacated space.

As the sequence progresses, Burns makes a move inside Plymouth left wing-back Steven Sessegnon before seeing his header saved from close range. 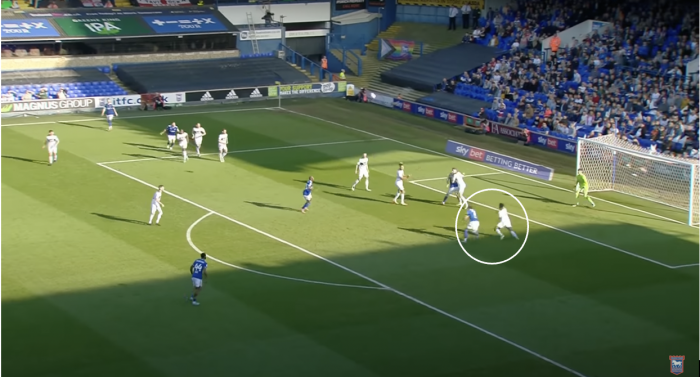 Burns’ attacking intelligence is also impressive. His penetrating runs beyond the opposition’s defences provides Ipswich with another outlet going forward. Not always holding his width, Burns often makes runs inside targeting the space in-between full-back and centre back.

At 27, Burns has lived moments in the final-third throughout his career allowing him to be composed and confident with his final action. 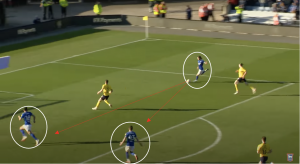 With Macauley Bonne and creative linchpin Bersant Celina both viable options in this sequence, Burns makes the correct decision pulling the ball back into Celina’s path who scores from the penalty spot. Despite the option seeming obvious, the weight of pass allows Celina to run onto the ball for an easier finish.

With six direct goal involvements in his last eight outings, Burns shows no signs of slowing down heading into Ipswich’s final six league fixtures. With the prospect of a top-six finish hanging in the balance, one thing that is for certain – Wales boss Page should be purchasing a season ticket at Portman Road ahead of the 2022/23 campaign should Burns continue his blistering form.