During a week in which he was pictured both training with Liverpool’s youth squad and photobombing a Liverpool fan’s wedding, you can’t really ever say there is dull moment in the public life of Mario Balotelli.

But what comes next for Super Mario?

There is no doubt the Italian’s star has waned in recent seasons and despite a dearth of natural goalscorers in Europe, no top side is keen to sign him.

Even top spending Chinese clubs, who seem willing to part with millions for any footballer with a modicum of talent, have yet to show any concrete interest.

It could all have been so different for a player who has just four years ago was firing Italy to the finals of Euro 2012.

Of course, many promising young players have failed to fulfil their potential, but there still remains a feeling that Balotelli has the ability to succeed.

His first season in the Premier League at Manchester City was solid, but it was the second campaign in which he really shone, with 17 goals and four assists in 30 appearances. 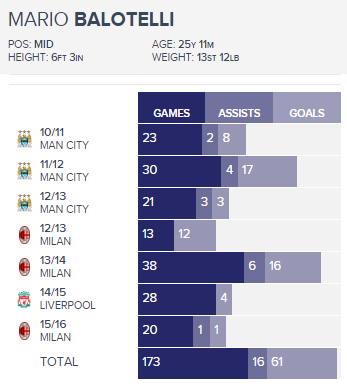 The next season he went off the boil following a series of disciplinary issues, and joined AC Milan in January 2013.

He performed remarkably well in the second-half of the 2012/13 season and went on to score 16 goals during the following campaign, which prompted Liverpool to sign him in the summer of 2014 following the departure of Luis Suarez to Barcelona.

Comparing his best seasons in Serie A and Premier League shows just how consistent Balotelli can be when he sets his mind to it. 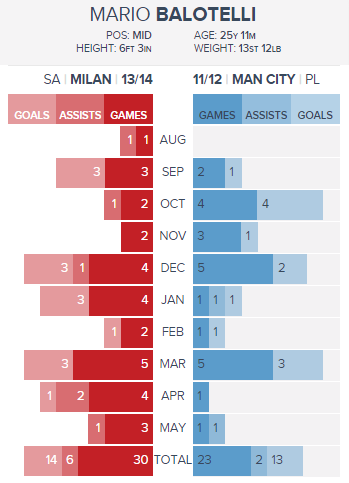 Too often though Balotelli’s abilities as one of very few high quality strikers in Europe are overshadowed by his personal demons.

We want him to become the player he was before his injury – the talent is still there, there’s no doubt about it. When we have done the crossing, heading and stuff he’s been world class.

There will be a club around who would be happy to have new Mario Balotelli. I have spoken clearly to the player about that.

The sense that you just have to accept Balotelli’s mind-set, and that he won’t change is a clear subtext. So what club will be prepared to do that?

The question marks, as always with Balotelli, seem to be more readily identifiable than the answers.