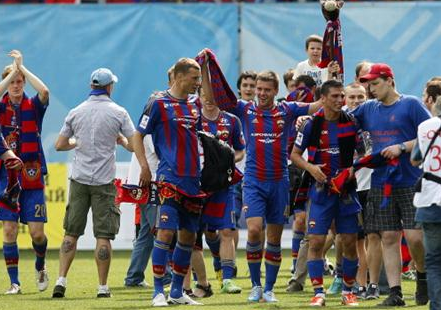 On the day that they were officially relegated following a 1-1 draw with Terek Grozny, it was announced that police were investigating the theft of more than 10million roubles (€250,000) from the accounts of Mordovia Saransk. Mordovia, it might be recalled, were bailed out over the winter break and handsomely so for making sure Gerard Depardieu got his citizenship.

The irony of the announcement yesterday was that only a few weeks ago the bold Gerard was given an apartment in Grozny by the leader of the Chechen Republic Ramzan Kadyrov. What’s not ironic is that once more a club tumbles from the top flight amidst financial turmoil.  Meanwhile CSKA are crowned Champions of the first season under the new format which the RFS President is hinting at changing back from July – May to the more sensible Summer season.

This Friday (17/05) FC Tom Tomsk, who earlier in the season were unable and unwilling to pay wages, were awarded a licence to play in the Premier League, on the back of that is a mystery. A disastrous outing in the Premier last time shed light on the lack of interest in the club and only for a government handout they’d be bust. Winning promotion means a Siberian club in the top flight, though how they will survive without massive central funding will be interesting.

The penultimate round of the Premier League saw a few unusual results (Samara beating a lacklustre Rubin) and some very strange on pitch antics. Shirokov’s red card for Zenit for a rude gesture to the home fans in the aftermath of his tap in, surprised many, except those who know the laws of the game. A couple of weeks ago in Ireland there was an incident with Ardee’s Ross Gaynor, now it was a St. Pete’s boy gesturing to Zenit fans. Given that it was in injury time and the match was almost over, some apologists claim he should have been warned, yet from the RFS President, rules have to be obeyed by fans, players and clubs. This was the application in its purest. The commentators were embarrassed by his action and agreed with the referee, however TV bosses made sure that the slo-mo replays cut away before the “up yours”.

Meanwhile Spartak celebrated a chance to stay in a Europa League spot with some outrageous refereeing. FC Krasnodar have every reason to feel hard done by though from a neutral point of view there was no bias towards the Muscovites, just dreadful decisions by a referee who went card happy and reason blind. Although, anyone who saw the Alania-Spartak match last July will remember the same referee giving decisions that were certainly odd and definitely in favour of the visitors from Moscow. However it would be unfair and incorrect to claim he was bought or biased, though this didn’t stop the “Bulls” owner Galitsky from taking to Twitter to lambaste the official. Referee’s are human and can have off days, however the reactions of club owners and officials need to be tempered. The RFS have yet to wallop twitter or media outbursts by owners and officials, when they do, Russian football is going to be fun.

On a parting note, around the country celebrations are taking place for clubs who are moving up divisions and heads are down in those who went down. A thought must be spared for the Russian Under-17’s who went on a slalom run to the European title in a gruelling penalty shootout. Great respect must be given to the players and coaches involved, and warning given to the RFS and clubs, these are young stars who can do something, maybe only 1 or 2 will make the full Senior side, though they must be cherished now and developed as much as possible. Do not let them end up like the disastrous and pampered ice hockey team who looked like strangers on ice when they crashed out of the World Championship quarter finals. Hockey showed its leading place in Russian sport with the release of the woeful “Legend No. 17” movie and when the team looked like doing something everybody watched, football is playing catch up, so success at under-age is a great way to start.