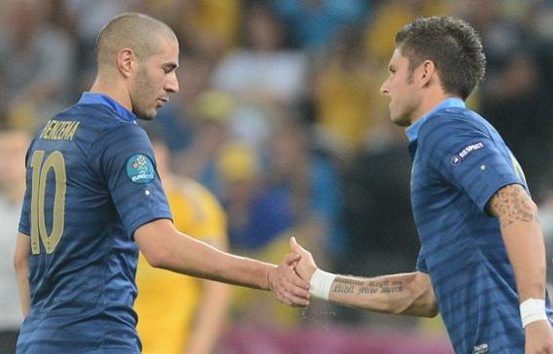 After nearly 500 minutes of football without a goal, including a frustrating 0-0 draw away to Georgia, the French national team found its va va voom in the second half away to Belarus on Tuesday evening, coming from behind twice to win 4-2.

Having not scored in 1,217 minutes before Wednesday, including only one shot on target in Tbilisi on Friday, Benzema had left Deschamps with little choice but to bench him. The Galáctico wasn’t the only casualty of France’s recent lacklustre performances, and Evra, Sissoko and Guilavogui were also dispensed with in favour of Clichy, Matuidi, Payet and Pogba. But a strong performance in the second half secured France a playoff place for the World Cup.

The extent of the changes reflected the criticism that the team has faced, and Deschamps has not shied away from his responsibilities, stating between the last two fixtures that “When the results aren’t coming in, the coach is always the one responsible”. In that context, he’ll be quietly happy of the changes he made. Pogba scored a goal and an assist, the diminutive Valbuena had more space to attack and created a handful of opportunities, and Ribery, fresh from being crowned European Player of the Year, bagged a brace.

The only negative from the night in Minsk was the performance of captain Lloris, who was personally culpable for both Belarusian goals.  He admitted to the mistakes in his post match interview, while also informing the media that it was Evra’s half time pep talk, not Deschamps that gave Les Bleus the inspiration to take the game to the hosts. The uncomfortable reality for Dechamps is that the national team is now ranked 25th by FIFA. While few believe in the fidelity of the ranking system, it doesn’t make comparisons irrelevant.

Ligue 1 players played prominent roles in other World Cup qualifiers in the last week. Ibrahimovic provided an assist in Dublin and a goal in Kazakhstan to give Sweden breathing space above Ireland and Austria. Cavani opened the scoring in a 2-0 win for Uruguay, which keeps them firmly in the hunt for an automatic qualifying spot. Uruguay’s opponents, Columbia, needed just a point to secure an automatic spot in Brazil, but Rodríguez and Falcao will have to wait until the next round of fixtures for that.

France’s strong relationship with its former African colonies meant that Ligue 1 was well represented in the final round of CAF qualifiers. With the identity of the ten group winners now known, it is interesting to note that no less than eight of them have players in Ligue 1. The next hurdle for the group winners is a two legged play-off, the draw for which will be on the 16th of September.  Fans of Ligue 1 will watch with interest to see which of Cote I’voire, Ghana, Burkina Faso, Nigeria, Algeria, Tunisia, Cameroon and Senegal progress to the World Cup draw.

With the Mercato now closed, French clubs finally have some certainty as to the shape of their squads. Lyon will be the most relieved – their miserable form continued in gameweek four, as they lost their fourth game on the bounce to Evian.  But Remi Garde will now be able to call on both Gomis and Briand, who had been frozen out of first team affairs by Lyon management in expectation of big money transfers. Garde has been rather noncommittal about whether or not there has been any personal falling out between the duo and management, but it is difficult to see Lyon getting its season back on track without the attacking pair.

Marseille was the other big winner in the closing days of the Mercato. Their policy of signing young home grown players to counter the strategy of PSG and AS Monaco is now clear, and in hindsight it is no wonder that they didn’t move for Barton.  20 year old Florian Thauvin has only scored 10 goals in three seasons as a senior professional, but OM paid €15m to Lille for his services. While he has pace, skill and the potential to score goals, we probably won’t see too much of him this season.  OM also brought in Mario Lemina to add to their acquisitions of Benjamin Mendy and Gianelli Imbula. All four of these recruits are under 21 and have bags of potential.

Sochaux was the other big mover on transfer deadline day, swapping Boudebouz to Bastia and taking Mayuka on loan from Southampton. PSG also lost the talented centre back Sakho to Liverpool, but with Marquinhos, Alex and Thiago Silva, it’s unlikely he would have played a central role. All told, French clubs spent a staggering €365m in the summer transfer window, 75% of which was spent by PSG and AS Monaco alone.  Coupled with the most recent Deloitte report on European football finances, that showed that Ligue 1 had the highest wages to turnover ratio (75%) in Europe, the financial sensibility that was the hallmark of French football for so long, seems to have vanished for good.

Having leapfrogged OM at the top of the table in gameweek four, AS Monaco will hope to field summer signings Rodriguez, Moutinho and Falcao for the first time this season at home to Lorient on Sunday. OM has the perfect opportunity to bounce back as the travel to winless (and Capoue-less) Toulouse. Third place St. Etienne, who continued their good form by beating cup winning Bordeaux entertain Valenciennes.  PSG, with back to back wins and a first clean sheet of the season, will be looking to kick-on against struggling Bordeaux. But with only six goals in four games, the question mark over Laurent Blanc isn’t going anywhere.