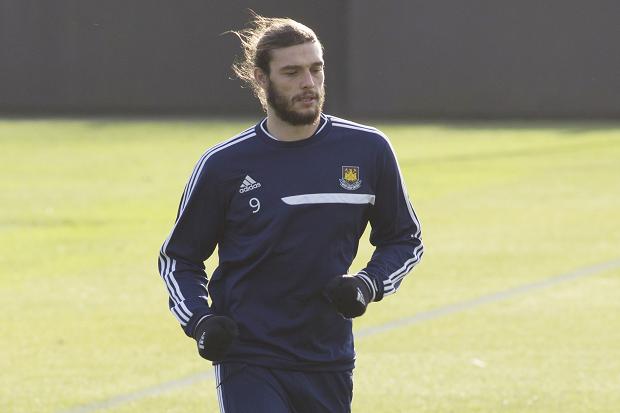 There is a similar precedent for a West Ham record signing: a strong, proven striker set to hit the peak of his career – having already been capped for England.

Then, came the dreaded niggles and lay-offs after the first serious injury of his career: a broken ankle suffered in 2006.

Dean Ashton never fully recovered – amid being rushed back for near-endless relegation six pointers – and would make just 40 appearances for West Ham United in the following 40 months.

A heartbreaking retirement at just 26 years of age followed and Ashton has, unsurprisingly, fallen out of love with football after endless rehabilitations and crushed optimism.

Perhaps, then, the patience and sophistication surrounding Andy Carroll’s recovery from his delicate heel injury should be of little surprise.

The Englishman, after all, initially suffered the plantar fiscia injury in the final game of the season last May but suffered a recurrence of the injury in training as he looked set to make his return in September.

On the top of that, Carroll suffered a stomach infection in November.

What followed has been a delicate, individual programme – which, marginally, increased in intensity week by week – with renowned Belgian physio, Lieven Maesschalck.

It proved successful for Carroll, who has now returned to West Ham’s base at Chadwell Heath and is close to a return to first-team training.

Admittedly, with Carroll having scored just seven league goals in 24 games last season, the argument could be made that the striker, directly, would not improve this statistic.

However, that is overlooking Carroll’s real role with West Ham: a pivotal focal point.

Without him, captain Kevin Nolan has looked directionless; cross favouring wingers like Stewart Downing and Matt Jarvis have proved ineffective; and undue pressure has been placed on West Ham’s defensive foundations.

Instead, United have had to rely on the dynamism and unpredictability of Ravel Morrison’s runs from deep as without an effective central striker, West Ham have little to build from.

Carroll looks to have already entered that pantheon and with Allardyce having recently signed a new two-year deal, the striker symbolises a shift in the West Ham support and philosophy.

Just a year ago, West Ham fans felt tangible disdain towards Allardyce’s football – an accentuation of an inferiority complex, as much as a hark to the traditions of the Academy of Football.

The cult status of Carroll, though, as Allardyce’s lieutenant was a crucial factor in the contentment of West Ham fans amid a successful 2012-13 campaign.

Also, it was no coincidence that the fear factor that once gripped West Ham late in games at Upton Park had, for the most part, dissipated.

As a result, following the chaos of having eight mangers in 12 years and four different owners in that same period, many West Ham fans were firmly looking to the future and a new era at the Olympic Stadium.

So, while David Sullivan and David Gold’s audacious seven-year plan was always unrealistic, the stability Allardyce has offered in tandem with the performances of his talisman, Carroll, was crucial to West Ham’s survival last season.

It is a combination that West Ham fans will hope will again prove the tonic for a mid-table finish.