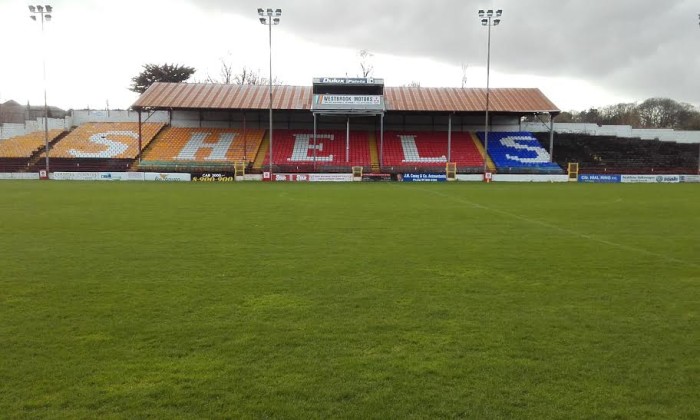 “There’s going to be face-painting for about an hour before kick-off,” says Frank Young, who acts as media officer at Shelbourne FC among several other roles. A new family section is in place in a bid to attract supporters to Tolka Park for the season opener against Cobh.

“The kids will come in with a special ticket and the ones that are here will be put in for a raffle at half-time for a goodie bag. That’s just the start. Later, we’ll be going out to clubs and schools around the area to give out free season tickets. They’ll have to have an adult with them and unfortunately the adult has to pay but it’s a good night out for the kids.”

It’s a sunny afternoon on the first day in March when we visit the famous Drumcondra venue. A gentle hum of activity fills the air as the sound of chirping birds signals that spring is upon us. Men are painting the walls a new coat of red and the community spirit is palpable.

It’s smiles all round as the Irish football season is about to get underway. However, Shelbourne find themselves languishing in the second tier.

It’s a long way from where the club were a decade ago. Back in 2oo4, Shels were going toe-to-toe with Deportivo La Coruna of Spain for a place in the group stage of the UEFA Champions League. A creditable 0-0 draw at Lansdowne Road (the game was moved due to the high-profile nature of the occasion) was witnessed by  around 24,000 people.

“I don’t know where they came from”, recalls Frank. “There was a real national interest. We’ll always remember that game.” Deportivo won the second leg 3-0 but Shelbourne had done their fans and the entire country proud.

The past decade however, has seen the club hit hard times. Since the most recent of their 13 Premier Division crowns in 2006, cash flow problems and mounting debts almost saw them forced into extinction.

Naturally, attendances at matches have dwindled as Frank explains: “These days we get between 700 to 850 people per game or thereabouts. That’s normal for a first division match.” It’s hoped that schemes like the aforementioned family section at the ground will attract people to the games as Shels aim to get back to the top flight for the first time since relegation in 2013.

Frank himself has been around the club for approximately 50 years, initially as a fan in the 1960’s. “How long have you got?” he laughs as the memories come flooding back. “When I was a young fella, my sister’s friend’s father had a ticket for Drumcondra who used to share the ground with us. I got my face well-known and I started coming every second week. When he wasn’t with me they’d let me in anyway.

“Gradually I started dropping the Drumcondra games because I liked the red of Shelbourne. I was on the committee of the supporters club when the likes of David and Pierce O’Leary played with us. The thing is when you offer your services here you get sucked into the club,” he adds with a smile.

While Frank has been part of the furniture at Tolka Park for several decades, it’s likely that he will soon be offering his services down the road at Dalymount Park as he explains: “We are probably moving from here in a couple of years to Dalymount to share with Bohemians in the new ground up there.”

“The FAI and the city council are making it into a municipal stadium up there so it would make sense for two teams to go into it together,” he says. “Tolka Park is currently owned by the city council so we’re only here on licence. While the work is being done at Dalymount, Bohs will probably come down and play here.”

Even though the two clubs share a historical rivalry, Frank feels the animosity has died down in recent years: “Bohs were the big rivals when we were in the Premier Division. There are no big rivals anymore. For now!”

Walking through the corridors of Tolka Park it is clear to see how much the club has touched the history of European football. Clubs of the ilk of FC Barcelona, Atletico Madrid and Panathinaikos have all played competitively against Shels in Dublin and English giants such as Manchester United and Leeds United have visited regularly for friendlies. More recently, Ipswich Town have sent a team over for the last three summers.

With the Airtricity League swinging back into action this weekend, it would be great for hard-working volunteers like Frank Young to get some extra bodies through the gates. Tolka Park is located on Richmond Road, with populated areas such as Clontarf, Fairview and Drumcondra situated nearby.

The white-hot atmosphere of a League of Ireland ground on a matchnight is something that many an Irish person has never experienced but something they will want more of after a first taste.

Shelbourne, like all of our clubs in Ireland would certainly appreciate the support. Alternatively , the away team could do with it even more, as Frank tells us: “Cobh will bring no one on Friday. It’s too far.”

Back Page Football’s attendance is already confirmed and we’ll be first to bring you the inside story of the opening game of the season at Tolka Park. We just won’t be expecting to see too much of media officer, Frank:”I’ll let you in but I’ll leave you to it after that. I also run the club shop!”

Tolka Park is the venue for Shelbourne v Cobh Ramblers which takes place at 7.45pm on Friday March 4th. Tickets range in price from €15 euro for an adult, €10 for a student or €5 for children and OAP’s and can be purchased here or at the venue upon arrival.