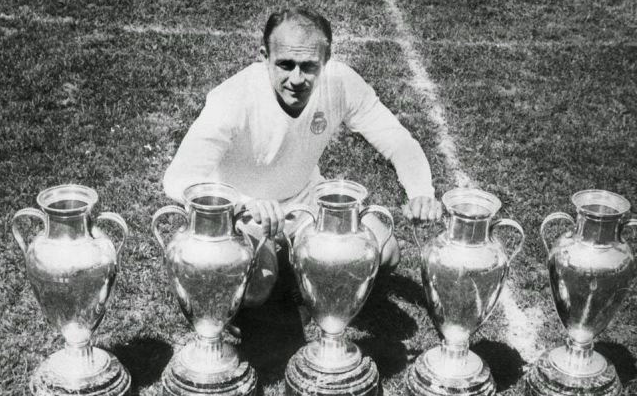 As another World Cup winds down, invigorated by its own sense of adventure, the sudden passing of a man who never graced the competition seems strangely symbolic given the immediate circumstances. It was the European Cup, now the Champions League, the great rival of FIFA’s glittering quadrennial starship, to which Alfredo Di Stéfano applied his brand, almost from the moment of its inception.

From 1955 until 1960, Di Stéfano, the Blond Arrow, bestrode UEFA’s flagship spectacle like no other: the undisputed leader of a Real Madrid side surely rated as the most dominant of them all. His passing on Monday, at the grand old age of 88, represents another snip of the ties that bind the football of then and now, old and new. 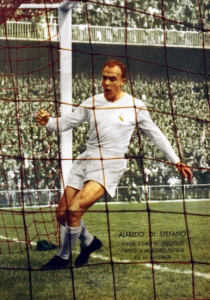 Five European Cups, two Ballons d’Or, 15 league titles as player and manager; these are astounding achievements but they fail to capture Di Stéfano’s true importance to the game he retuned. In 1955, football was on the cusp of its evolution. It teetered at the tipping point between the charmingly limited old-world stylings of bad pitches and heavy balls, parochial domestic contests experienced only by those who were present, and something infinitely more significant, untouchable even.

The dawn of the European Cup represented the rebirth. It confirmed the sport as a continental pursuit in which supremely talented men from myriad places and diverse backgrounds were joined in a common cause; they communicated in a language defined not by rules of grammar or syntax but of a simple game.

In grabbing the initial glory, and then refusing to relinquish it for another four years, Real tied itself, perhaps for all time, to the very concept of success in the competition. It is a spectre that continues to characterise the club, an outlook formed, season after season, by a demented pursuit of the triumphs that came so easily to that wondrous generation.

At the head of this shimmering collective of ruthless, pearl-clad warriors, purveying their sport as an art form few could truly understand, let alone imitate, sat Di Stéfano, a Buenos Aires-born Spanish international of Italian and Irish stock. In Castile, he would cement his stature as, arguably, the most complete player in history. Tales of his exploits must be taken as fact, for there is no great slew of video footage to contradict or support them but, by all accounts, his was a mesmerising presence. He exerted complete control on his team: organiser, creator, goal scorer.

For those Glaswegians who witnessed Di Stéfano’s hat-trick in the 1960 destruction of Eintracht Frankfurt, no player may ever match the Argentine’s brilliance. His partnership with Ferenc Puskás propelled them both into the stratosphere and, together, they plundered over 550 goals in the colours of Real, a fearsome duo playing a modern tune in a transitionary age. Francisco Gento and Raymond Kopa were there, too, gliding accomplices in a transformative group. 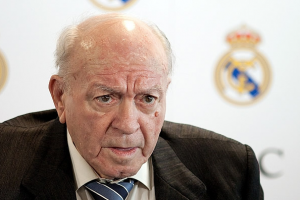 Di Stéfano forged a respectable post-playing career but his time as manager at the Santiago Bernabeu was marked more by silver medals than silver trophies. Coming second was an unfamiliar sensation to an individual whose name will be remembered forever as that of a champion. Even in his dotage, Di Stéfano was retained by Real as a living deity, a wry figure in the club’s rarefied echelons and a glowering reminder of the obsession that fuels this unspeakably dazzling institution.

To see the greats leave us is difficult, but leave they must. It should have pleased Di Stéfano no end, however, to see his beloved club secure La Decima before shuffling off his mortal coil, a neat finish to a life well lived.