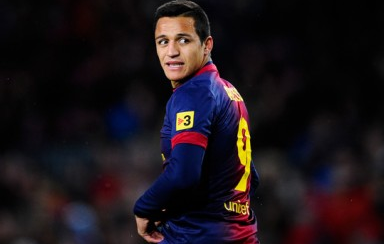 Wanted for extreme counts of flair, pace, finishing and skill, Alexis Sanchez is a transfer target for a sweep of top European clubs including Manchester United, Juventus, Arsenal and Liverpool. Although coveted and with his Barcelona future up in the air, Alexis Sanchez should have another thing on his mind, being the jockey of the dark horse that is Chile this summer in Brazil.

When Chile and Alexis Sanchez kick off their World Cup with a match against a struggling Australia side, they have the pleasure of not having pressure on them to go far in the competition. Most people have the two finalists of the last World Cup as the teams to advance from Group B, but Chile ,spearheaded by Sanchez, have a chance to advance and set Brazil on fire.

Jorge Sampaoli, the Chile manager, is a true descendent of previous boss Marcelo Bielsa. Bielsa played attractive attacking football four years ago in South Africa, and Sampaoli has continued to delight fans. The boss plays a high tempo game where his side go all out in attack when having possession and press defenders and opposing players when not holding possession. Players such as Alexis Sanchez have thrived under him, becoming a talisman of his national side.

In one of Chile’s last international matches, the South American’s traveled to Stuttgart to face Germany in a friendly. The match ended 1-0 with victory to the Germans, but the score line didn’t reflect the run of play. Chile and Sanchez opened up Germany’s defence and caused them many problems throughout the night.

Alexis was the Road Runner, leaving the Wile E. Coyote German defenders in his dust. No German player could match him for speed, or match most of the Chile team in general. The Chileans used their speed as they attacked the Germans from all angles and Alexis ghosted in behind the German defence multiple times.

The other notable stars that will be key to Chile and the ones that also caused the Germans problems were Eduardo Vargas and Arturo Vidal. Vargas, like Sanchez, can buzz straight past defenders like a hornet and can be deployed centrally or on the wings. Vidal, arguably the best box-to-box midfielder in the world, never gives up until every blade of grass is covered and has a killer instinct in the attacking third.

This Chile team will hurt Australia, Netherlands and Spain when they run at their defences, spread the ball wide and players like Sanchez run in behind the oppositions defence. The Chileans can evade onrushing challenges with their agility and beat most defenders for speed. Here they can attack through pockets of space against opposing defences. The width of the pitch will be extremely vital for Chile. Vargas and Sanchez on opposite touch lines will fly past defenders like wingmen up in the sky. They can cross over their positions repeatedly, leaving their markers dazed and confused.

The Chileans always try to impose two on one situations on the wing, usually created from the overlapping runs of Eugenia Mena down the left or Mauricio Isla down the right. The runs in behind opposing defences will be especially lethal, a move Sanchez executed numerous times and to great effectiveness against Germany. After he got behind enemy lines he acted as the architect of moves cutting delicious balls across just asking to be hit.

Together the lethal link up and chemistry of the Chile team will be their most effective weapon. With the understanding they displayed throughout the qualifying rounds and against Germany, they showed together they can act as naval ship that can destroy anyone.

The Chilean defence is their weakest point though. Two important cogs in their defensive machine will be Marcelo Diaz and Gary Medel. Marcelo Diaz acts as a screener to the defence, reading the game and closes down space. He can organise and link up play from the middle of the park as well, crucial to the midfield. The main defender for Chile is Gary Medel. Medel isn’t afraid to get physical with opposing attackers, but has good discipline. He can read the game like a book and make crucial interceptions and tackles when it counts. Diaz and Medel act as the armour around the Achilles heel of this Chile side and will be just as key as the attackers.

With a team full of enthusiasm and a point to prove, along with players that perform on the international stage like Alexis Sanchez, Chile can go toe-to-toe with the big boys in the World Cup no matter who they are. In Brazil they will open the eyes of the world and capture the hearts of fans if they play like they have under Jorge Sampaoli in previous matches, and can look to upset Spain and Netherlands in their group.