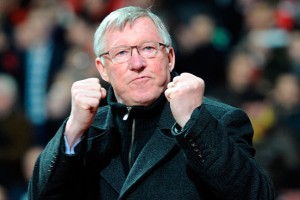 Now that Alex Ferguson is resigning, we can finally conclusively name Manchester United’s all-time XI under the Scot’s tenure.

Some places on the team will of course be deliberated as names such as Paul McGrath, Andrei Kanchelskis, Nemanja Vidic, Patrice Evra and Robin Van Persie among a host of other household world class names have missed out on this team when they could quite easily have featured here.

As a Manchester United team under Alex Ferguson, it seems only apt that it is an attacking focused but a defensively balanced side which builds from the back. It also seems appropriate that the team plays a 4-3-3 formation.

There was much head scratching over many positions but surely only Schmeichel could fill the goalkeeping berth. He competed as an Olympic handball goalkeeper in his native Denmark and his famed “star jump” came from his time playing that sport. A real larger than life character, he was a massive presence at the back, organising the back four whilst pulling off incredible saves when necessary.

Never particularly credited for his performances at United, he went about his job quietly and efficiently, amassing a total of more than 400 appearances for the Red Devils as well as winning eight Premier League titles and two Champions League crowns by the end of what was a more than stellar career with the club.

Ferguson stated that letting the big Dutch man go was the biggest mistake of his managerial reign and Stam was an imposing force at the back for The Red Devils as they won the Treble back in 1999. Could have helped lead United to another Champions League title or two had he not been ejected from the club by the dictatorial Scot in the summer of 2001.

Compliments Stam very well as the Londoner can come out of defence and play with the ball while Stam is there for his aggression, his tenacity and will to win. The stylish Ferdinand would get the ball on the floor, look to beat a man and assuredly find a team with a composed short range pass while also being strong in the air and his 6’3″ helping to make him an imposing physical presence as a stopper also.

The Cork man was I think arguably Sir Alex’s best signing in terms of value for money. He was another very good defensive full-back, but he got forward and contributed with goals and made goals and was extremely useful from the left flank with dead balls. There was never any fuss with Irwin, he gave eight out of 10 week in, week out with no questions asked and no grumbles made.

Arguably the best right footed striker of a ball in Premier League history. Beckham could literally deliver a ball on a sixpence to a team mate from 40 yards away as well as being lethal from set pieces. A man who always put in a shift bombing up and down the right flank, himself and Neville had an almost telepathic relationship with each other as United and England team mates.

For many years Keane was Ferguson’s eyes and ears on the pitch and the combative linchpin at the heart of the engine room. His never say die spirit and attitude of dragging his team mates along with him was an extra replica of his manager’s.

Hailed by many as the toughest opponent they have played against in the Premier League, Scholes’ trophy cabinet bulges with everything that The Red Devils have won in the Premier League era. Nicknamed “Sat Nav” due to the accuracy of his passing, only Beckham is better than Scholes in terms of ability to pick out a pass while Beckham’s overall game is a pale shadow of the ginger magician’s.

Although he stayed just six years at the club, it was an immensely successful period for the prolific Portuguese. Upon his arrival he asked for the no. 28 shirt but Ferguson insisted that he wore the club’s iconic no. 7. The young man did the shirt proud by twice winning the PFA Player’s Player of the Year and Fan’s Player of the Year Awards as well as three Premier League titles and the 2008 Champions League as well as being named FIFA World Player of the Year that year. The following summer the Iberian star joined Real Madrid for a world record £80 million (€94 million) transfer fee.

Many argue that the signing of Cantona for what would become viewed as a paltry £1.5 million back in summer 1992 was the best pound-for-pound signing of Ferguson’s time at Old Trafford. At the time it was viewed as a massive risk though. The Frenchman had just won the (then) First Division (top flight) title with Red Devils’ bitter rivals Leeds, but the Frenchman was seen as a loose cannon and a potential liability. While he certain had his bizarre and regrettable moments (his kung fu kick into the Crystal Palace crowd being just one), Cantona would transform how the English game was viewed with his arrival opening the floodgates for a posse of  foreign players to enter English football, to such an extent that there are now considerably more foreign players than English plying their trade in the Premier League.

The Welshman has made 50 appearances more than any other United player. He made his debut back in 1990, before the birth of several of United’s current first team. He has scored played and scored in every Premier League season. A winner of numerous accolades including  PFA Player’s Player of the Year, six times voted onto the PFA Team of the Year, as well as of course lifting two Champions League titles and an amazing 13 English Premier League crowns as a player.