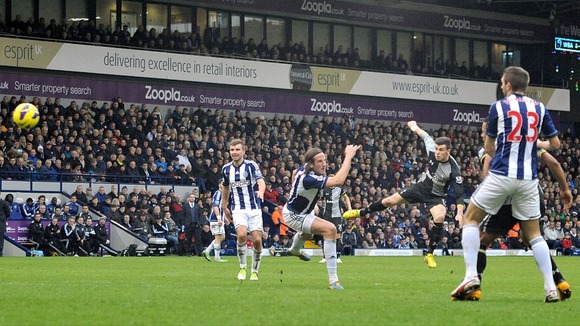 One point out of the club’s last six games speaks volumes about West Brom’s current downfall. The last victory tasted was on Boxing Day – against a lowly positioned Queens Park Rangers side – and since the side have slowly but surely dropped like a stone into ninth place in the league table.

Injuries haven’t helped, coupled with the quite frankly embarrassing Peter Odemwingie saga which dominated the headlines on Deadline Day. His unrest at the club and desperation, if you will, to make an exit all through January did nothing to help Albion’s team spirit or concentration levels in what was a tough period.

January saw the club collect a mere one point out of a possible 12 and an early FA Cup exit, a quite unbelievable contrast to the team’s exploits in the early stages of the season when Albion were taking everyone in their stride. Things have changed. Steve Clarke’s character now truly comes into question.

Clarke has, overall, done a exceptionally good job so far this season. If you had asked the supporters if they would have taken ninth place and 34 points with 25 matches played then they would have snapped your hand off. No doubt about it. But, taking that into account, the recent displays have been disconcerting and Clarke must rejuvenate his troops for some challenging games ahead.

A trip to Anfield is next – which will be an extremely tough task – followed by a home tie against the inconsistent Sunderland who will prove a stern match up, before games against Chelsea, Swansea, bogey side Stoke and West Ham to conclude March. It doesn’t get any easier.

Albion are in desperate need of a win. It doesn’t need to be fancy; three points will do. It’s hard to see where exactly this win is going to come from though, with a squad on such low confidence at the moment. The return of the majestic Ben Foster in goal has made a considerable difference but with midfield enforcer Zoltan Gera out injured for the rest of the season and the recently sustained niggles to striker Shane Long and central midfielder Claudio Yacob – West Brom are short on numbers.

The team was so destructive earlier in the season was at full strength, but it was inevitable injuries to players would happen. I doubted how the club would cope, and the answer is not very well. Fringe players have had to be used, such as Jerome Thomas, Graham Dorrans and a youth team player Adil Nabi was on the bench at Reading a few weeks ago.

The second stage of the season is significant. Although I cannot see Clarke’s men dropping into the relegation mix by any stretch of the imagination – I can’t see them pushing on for a possible Europa League spot like some have predicted. A top ten finish would be a satisfactory achievement. When key players return it will certainly boost Albion’s hopes of finishing strongly.

Whether Odemwingie will ever be accepted by the fans ever again is dubious. His outrageous Twitter rant and naivety on Deadline Day hasn’t helped him ease the tension with West Brom at all. Reports claim he has been training with himself this week and it’s almost certain he will leave in the summer. In my view, any player that scores a hat-trick against arch rivals Wolves deserves to go down in Albion folklore but the recent saga is simply inexcusable.

The second player to show the club up in a matter of days is Macedonian left-back Goran Popov who was sent off on the weekend against Spurs after spitting at Kyle Walker. An utterly disgraceful act that has once again only damaged the Baggies’ reputation; and it’s understandable no appeal has been launched.

This leaves the squad even more reduced in depth. Romelu Lukaku, on loan from Chelsea, can’t keep leading the line all by himself. He has impressed and his robust style has worked a treat in certain games but he’s young and needs the support. Home games are particularly important. The side have won seven of their 13 home matches in the league this season – an adequate record – but could be improved. Away form has been erratic, too.

As long as this dire run continues, and the losing streak goes on, players’ spirits and supporter’s frustration will worsen and worsen. The Anfield game will provide a daunting task but it would be encouraging to see Albion really go for it against Liverpool and try and stop the rot. Otherwise, things will only continue to get worse.