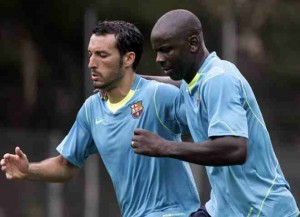 He cuts a confident figure, standing between Gigi Buffon and Luca Toni, proudly singing ‘fratelli d’Italia’ and, as the music ends, he follows his countrymen, shaking hands with first the officials and then some very familiar opponents. Men he has played alongside, team-mates past and present, some even close friends, until he reaches the last man. A quick embrace that signifies a closer bond than most, and then off he goes, ready to take part in what would be undoubtedly the biggest game of his career.

Sadly, as much as the gesture signified the start of the 2006 World Cup Final in Berlin’s Olympiastadion, that affectionate moment was also the beginning of a wait that continues to this day. Gianluca Zambrotta and Lillian Thuram were both superb that warm German evening, as they had been over the previous five years, two incredible men who’s consistency and talent fully befitted a club that had been home to some of world football’s best fullbacks since the birth of the position.

Of course the following events of that very same summer saw both protagonists leave the club for Barcelona as the club and its players made the necessary changes following the forced relegation of la vecchia Signora. Alessio Secco has been criticised often and by countless people for his ‘transfer strategy’ – many would even go so far as to call that an oxymoron – and nowhere is that more glaringly obvious than with these two positions.

Clearly the first way to assess this is to look at the men he left behind, namely Zdenek Grygera, Jonathan Zebina and Fabio Grosso. Aging, on hugely inflated contracts and simply not up to the standards set by those who had worn the Bianconeri number two and three shirts. It is beyond debate that they are no where near the level of illustrious names like Antonello Cuccureddu, Antonio Cabrini and Ciro Ferrara to name but three of their predecessors.

As poor as those three squad members were, it is hard to argue against the fact that Beppe Marotta – who succeeded Secco last May – has also failed to find adequate solutions. Gigi Delneri seemed to have full faith in Paolo De Ceglie and was rewarded with the best spell of the Primavera products career before injury struck. Armand Traoré has not been physically fit enough to have a regular run in the team to make a final judgement, but the Frenchman certainly has not shown anything like the standard required.

The emergence of the Danish youngster Frederik Sørensen is, while of huge credit to the scouting abilities of Fabio Paratici, more a reflection on the complete failure of Marco Motta since his arrival from Udinese this past summer. The former Roma man has been woeful in almost every facet of his game – positionally, tactically and mentally weak, he has been so poor that the only scenario in which Juventus may exercise the option on his purchase is to sell him on elsewhere. That the price is only €3.75 million over three equal annual payments shows just how bad his displays have been.

Looking around Serie A there is a dearth of top quality full-backs, as Milan’s regular use of Luca Antonini and Marek Jankulovski serves to highlight. Of the bigger clubs perhaps only Inter, with their combination of Maicon and Yuto Nagatomo, have what could even be considered an adequate duo. Yet this season there is undoubtedly a stand out pairing lower down the league – Federico Balzaretti and Mattia Cassani of Palermo. Despite the Sicilian sides woes in the latter part of 2010-11, both have played their way into the starting line-up of the Italian national team through some stunning performances.

Born just twenty months and 90 kilometers apart the two share another common trait that sits uncomfortably with any of the clubs fans aware of their career paths. When Calciopoli forced the departures of Zambrotta and Thuram, both members of the current Rosanero squad were owned by Juventus. This means that not only did Secco fail summarily to find a solution, he actually sold two of the best players on the Peninsula this term.

Balzaretti joined the Old Lady on a free transfer in 2005 following the bankruptcy of Torino, following another iconic Bianconeri fullback – Champions League winner Gianluca Pessotto – in moving across town. He followed a solid first twelve months under Fabio Capello (starting 20 games) with an impressive season in Serie B as Didier Deschamps masterminded a swift return to the top flight. Just as it seemed an answer had been found Secco then sold ‘Balzac’ to Fiorentina for just €3.8m in one of his most inexplicable moves.

Yet if that was foolhardy, it pales in comparison to the treatment of Cassani, a product of the clubs immensely successful youth sector. He made his one and only first team appearance whilst still a member of a Primavera side that would go on to lift the Viareggio Tournament twice. Coming on as a late substitute for Marcello Salas in a Champions League tie away to Dynamo Kyiv, he was then sent on loan to gain experience, first to Sampdoria then to Hellas Verona.

That second move would be perfect for the player, and the Gialloblu took over half his registration on a co-ownership deal for €400,000, ensuring they would see at least some fiscal reward for giving him 118 games to improve his emerging talent. In 2006 however Secco would make a huge error, selling the remaining half for a mere €1.425m. That means the former Sporting Director effectively sold the Azzurri’s starting fullbacks for a combined €5.625m.

Whatever the reasons for Secco’s mistakes – and the compounding of them by Marotta – two things now seem certain. Firstly, none of the names to have so far followed Zambrotta and Thuram into the positions will be gracing a major final, and more importantly, until the starting slots are covered by quality players, neither will Juventus.