Late on Tuesday evening, as the deadline approached, Italy coach Marcello Lippi finally named the 23 players he has selected to defend the World Cup won four short years ago. Lippi now has only days remaining in which to find a combination and a system under which his men can flourish as they did in Germany. 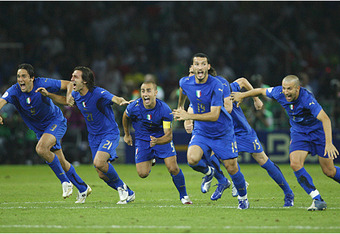 The announcement came so late as Mauro Camoranesi suffered an injury in the final training session and the coach gave his medical staff as much time as possible to assess the injury and make sure the player would be available for the first game in 12 days time.

Surprises were in short supply yesterday, with the coach instead making the headline grabbing decisions earlier. Antonio Cassano and Mario Balotelli both carry far too much baggage for Lippi, a coach who is a proven master at making his teams greater than the sum of its parts.

The hero of Italy’s penalty shoot-out victory over France in the 2006 Final, Fabio Grosso was also cut last week, as Lippi made sure his chosen men could begin working with the least amount of distractions possible.

In goal, Gianluigi Buffon is the undisputed number one, with Cagliari’s rising star Federico Marchetti and Napoli veteran Morgan De Sanctis as back up.

“We look good together…”

The defence is made up of Captain Fabio Cannavaro, who while disappointing for Juventus this season, has been impressive for his country. It is also to the ire of Juve fans that his best performances in his second spell at the club have been in games leading up to International fixtures.

He will be partnered by former team-mate Giorgio Chiellini, who was outstanding all season. Gianluca Zambrotta also made the cut, as did Genoa pair Salvatore Bocchetti and Domenico Criscito, Bari star Leonardo Bonucci and Napoli right back Cristian Maggio.

Midfield is filled with industrious and powerful players, perhaps mindful of how the team was bullied in the Confederations Cup last summer. Juventus say their future will be built around Claudio Marchisio, and Lippi agrees. He joins 2006 winners Mauro Camoranesi, Danielle De Rossi, Gennaro Gattuso and Sampdoria captain Angelo Palombo.

Simone Pepe of Udinese, Milan’s Andrea Pirlo and Fiorentina maestro Riccardo Montolivo will be required to provide the invention needed to unlock the world’s best defences and supply the forwards with chances.

The five forwards contain two men, Vincenzo Iaquinta and Fabio Quagliarella whose versatility and ability to work the flanks saw them included over two who can consider themselves unlucky in missing out – Marco Borriello and Giuseppe Rossi. They are joined in the squad by the two highest scoring Italian players this season, Serie A Capocannoniere Antonio Di Natale and Sampdoria’s Giampaolo Pazzini. Finally Fiorentina’s outstanding Alberto Giladino was chosen following his impressive form both in the league and during the Viola’s surprising Champions League campaign.

23 men all hoping to see their coach with a huge smile and an even bigger cigar come July 11. The champ is here.