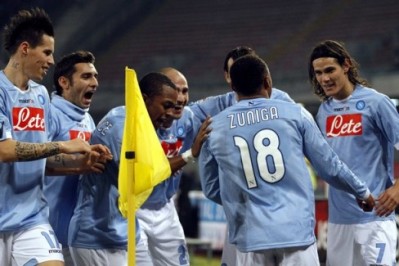 A quick glance at the Serie A table with twelve games to go, with Milan in first place as they have been for much of the season, and a resurgent Inter close behind in third is a familiar tale, albeit with the roles reversed for the first time in a number of years.

Yet between San Siro’s two huge clubs sit SSC Napoli, just three points off top spot heading into this weekends clash with Milan. They last breathed this rarefied air when Diego Maradona was in his prime in the late 1980’s and very early 90’s, when the Calcio landscape was very different. Could we really be set for a repeat of those glorious days in the shadow of Vesuvius with the current squad?

Last season they went from the ridiculous under Roberto Donadoni to quite sublime after appointing Walter Mazzarri, almost breaking into the top four but fading to finish sixth and snatching a Europa League spot. Owner Aurelio De Laurentiis was clearly pleased with the progress and throughout the summer he made changes to the squad to make it better suited to the new coach, shedding good players who no longer fitted the system such as Luca Cigarini and Erwin Hoffer.

Then came a huge surprise with the departure of Fabio Quagliarella after less than a year at his hometown club, and his destination made the situation even harder to stomach, shocking the city and leaving the fans stunned. Losing a good quality native son is always hard, to lose him to hated rivals Juventus makes it impossible.

But seen as a Donadoni signing and then struggling for form, Napoli felt they had no choice but to move him on, after circumstances conspired to make his chances of success almost impossible. To Quagliarella’s credit he went onto the Curva after the move was finalised and told the Ultra his reasons for wanting to move. One thing that is certain however, is that is was not for money, with a 33 per cent pay cut from his wages in Naples to those he now earns in Turin.

Yet earlier in the summer Edinson Cavani had arrived from Palermo, a player who had spent most of his career up to that point telling anyone who would listen that he should not be used out wide as he often was both by the Rosanero and the Uruguayan National team. Unlike so many previous coaches Mazzarri listened, making Cavani the focal point of his attack. Not only would he surpass expectations and outshine anything Quagliarella had done at the club, he has all but secured a place in Napoli history.

Cavani has made a sensational start to life in Naples, 20 goals in 26 games in Serie A sees him atop the leagues top scoring charts ahead of much bigger – and more expensive – names. He netted just 37 times in three years with Palermo yet at this point in time he has just ten less than that already once his seven Europa League goals are added in. He has also added six International goals this season to his previous tally of just two for La Celeste proving that his consistent form is no trick.

The only player in the clubs history to end a campaign as the leagues top scorer is of course Maradona who managed the feat with just 15 goals in 1987-88 and the single season scoring record belongs to Antonio Vojak who netted 22 eighty years ago. With twelve games remaining it is hard to see el Matador not getting the three strikes he needs to take that record.

To make it solely about the striker however does a huge disservice to some other players quietly having great seasons. He is supported in attack by the excellent – and much admired – Marek Hamsik who has added eight goals himself and the lively Ezequiel Lavezzi who has become vital to the sides performances. He has only netted five times in the league but has ten assists which highlights his creativity and importance to the team.

Ex-Juventus goalkeeper Morgan De Sanctis may have lost his place in the Italy squad following the World Cup but he is invaluable to this Napoli and has made a number of vital saves already this season. He, like many of his team-mates may not be a household name but he is out-performing a number of better known ‘keepers this campaign.

The defence in front of him has defied all expectation as Paolo Cannavaro and Hugo Campagnaro have been fantastic almost every game. While the injury to Gianluca Grava was expected to hinder them, Salvatore Aronica has slotted in comfortably as the three men continue to perform far better as a unit than you would expect from players of their talent.

It is here where the true reason for their success lies – that three man defence at the heart of their 3-4-2-1 formation. It works﻿ ﻿﻿s﻿o﻿ ﻿w﻿e﻿l﻿l﻿ for a number of reasons, not least of which is the wide-spread use of 4-3-1-2 in Italy, a system that plays directly to Napoli’s strengths. Giving them an extra man in m﻿i﻿d﻿f﻿i﻿e﻿l﻿d﻿﻿﻿ ﻿a﻿n﻿d having no wide players ﻿﻿t﻿o﻿ f﻿o﻿r﻿﻿c﻿e Cristian Maggio and ﻿Andrea﻿ Dossena ﻿t﻿o﻿ ﻿﻿p﻿l﻿a﻿y﻿﻿﻿﻿﻿﻿﻿﻿﻿﻿ ﻿﻿f﻿r﻿o﻿m﻿ ﻿a﻿ ﻿d﻿e﻿e﻿p﻿e﻿r﻿ ﻿p﻿o﻿s﻿i﻿t﻿i﻿o﻿n﻿ ﻿e﻿n﻿s﻿u﻿r﻿e﻿s﻿ ﻿﻿﻿﻿﻿﻿t﻿h﻿e﻿y﻿ ﻿a﻿r﻿e﻿ ﻿almost always on the front foot, able to start from an advanced position and support the attack at every opportunity. Allied to this is ﻿the opposition back four struggling to identify direct opponents from the extremely mobile and fluid Cavani-Hamsik-Lavezzi trio, all factors combining as the team benefit from the framework Mazzarri has provided.

With even the suspension of Lavezzi failing to slow them down this team does not look like having the fall from grace so many have predicted. A unique system, a unique city and a unique situation at the summit of Serie A may all leave San Gennaro smiling on Napoli once again.