With the third series of fixtures underway in the Airtricity League of Ireland, the battle at the bottom is shaping up to end in thrilling fashion with all still very much to play for. The four teams in the most immediate danger of the drop are separated by just four points; Bohemians, Bray Wanderers, Shelbourne, and UCD.

Bohs currently sit bottom with 18 points, next in line are Bray with 20, then Shels, also with 20 but a goal difference which betters that of Bray by 4, fourth from bottom sit UCD with 22 points. Even outside of these four, Drogheda United sit in eight place with 26 points, leaving the Louth side not too far from the danger zone themselves.

First things first, let’s start at bottom club Bohs and their survival chances. It was predicted by many that this season would be a struggle for the Dublin side, but just how much of a struggle was always in question. That’s been answered.

Their season started relatively well with a 2-1 victory over UCD. They went on to pick up seven points from their first five games in which they defeated two relegation rivals UCD and Shelbourne, and shared a point with fierce rivals Shamrock Rovers in Dalymount Park. Then things took a turn, losing three on the trot to Derry, Limerick and Dundalk. Bohs began to realise they were very much involved in this relegation scrap. 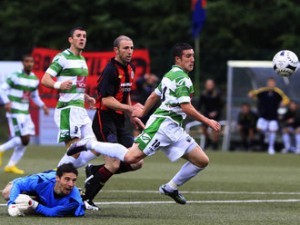 One major contributing factor to where Bohs find themselves is that they, unlike the teams around them, have not really had a good run of games this season. Had they have put a run together like those around them did, they would be well clear of this fight but instead they find themselves at the foot of the table. With Aaron Callaghan gone, Owen Heary (right) remains in charge, for the moment.

One factor that could play into their hands is the very stature of the club. Bohemian Football Club is a huge club in Irish football terms. It is a club which has never been relegated. Travelling to Dalymount to play Bohemians still has a certain feel to it. Travelling to an intimidating ground to come up against a big club who, if you ask anyone associated with the club, belong nowhere near the bottom of the table. I’m certain it will be drilled into the players that this club is almost too big to go down and I expect Bohs to put up more of a fight in the final series of fixtures.

Next, Bray. The Seagulls find themselves second from bottom in the league. They also have the second worst defence in the league, with only UCD leaking more goals than them to date this season. At a first glance, things look pretty bleak for the Wicklow based side. B

But Bray do have a few factors which could prove to work in their favour. Pat Devlin’s men are one of, if not the most experienced League of Ireland side when it comes to fighting for their lives, and more often than not they come out on top. They will not be panicking about the fact that they find themselves near the foot of the table as it’s very much where they expect to be season after season.

One person which gives Bray great hope indeed, is their record goal-scorer Jason Byrne. Since returning to the club in 2012, the veteran striker has netted 26 times in just 40 games. Byrne is a man who is always capable of scoring with just one chance and having him in the team means Bray will always be likely to score goals.

Young gun Ismahil Akinade has also been finding his goalscoring touch since the halfway point of the season and should he continue this form Bray could well pull off a surprise or two before the season ends.

Tolka Park next, and Shelbourne the team to be looked at. Another big club that find themselves battling for their lives. For a long time Shels looked dead and buried, written off by most who follow the league and the teams above them possibly even began to relax. Following the departure of manager Alan Matthews in May and the arrival of Johnny McDonnell however, they began to show some fight and claw their way back into the battle. Some astute signings too have injected a freshness into things at Tolka.

Perhaps being written off by almost everybody helped, it certainly would have eased the pressure as nobody will have expected anything from them. Their best run of form came as they burst into life with a draw away to Drogheda was followed by successive victories over Cork City, Limerick and UCD, then came a draw away to fellow strugglers Bray before finally succumbing to defeat at the hands of Dundalk.

Shels have come into form at a good time and this could be a decisive factor in regards to their survival hopes.

Now to the team who currently sit four points clear of bottom, UCD. Like Bray, UCD are well used to finding themselves at the bottom of the table as the season reaches its end.

Like Bray and Shelbourne, UCD showed signs that they are capable of winning games. UCD’s hot streak coincided with Bray’s. The Students have a massively inexperienced squad. The coaching staff at UCD will be experienced at fighting the drop, the players, on the other hand will not. With the right guidance UCD will be able to remain calm and keep their heads above water. Knees will no doubt be trembling in the dressing room at Belfield, it will be interesting to see how The Students handle the pressure of another relegation dog-fight. They will hope the loss of David McMillan, who joined his brother Evan at Sligo Rovers last month, won’t prove their undoing.

It could well come down to the remaining fixtures between each clubs. Below is small table of games in which the bottom four have faced each other so far this season.