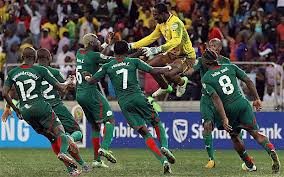 This weekend sees the recommencement of a frantic yet compelling AFCON qualification process, as the road to January’s showpiece draws ever nearer. Numerous nations will be targeting the inking of their place in Morocco; however for others the qualification equation is substantially more complicated.

In Group A Congo – having only been afforded a place in the group stage courtesy of Rwanda fielding the ineligible Dady Birori – could in the coming week cement the most remarkable of revitalisation missions. Claude le Roy’s side arguably produced the shock of the initial round of fixtures by consigning a vulnerable Nigeria to their first defeat on home soil in 33 years, before consolidating that with a routine victory over Sudan.

With the consensus being that ten points would – barring an extraordinary sequence of events – confirm qualification, a victory over South Africa in Ponte-Noire on Saturday would take Congo to the cusp of a first qualification in 14 years. . The double header with Bafana Bafana was previously percieved as the key battle for second place, yet Nigeria’s strife has thrown the group wide open.

The super eagles are now treading a treacherous road and only maximum points from twin fixtures against Sudan would leave them in control of their own destiny – unfortunately Nigeria are liable to be again hindered by the continued saga surrounding the contract of coach Stephen Keshi.

Whilst Congo’s progression remains somewhat uncertain – given their respective talent pool and the historical connotations attached to qualification nothing should be considered certain – several other sides discounting substantial shocks should ease their way into the continent’s premier tournament. Algeria – Africa’s standout side in Brazil – look well placed to clinch at least four points from their dates with Malawi thus providing Christian Gourcuff with a seamless inception – although conditions in Blantyre can make life difficult even for those sides at the top of the African football spectrum.

Cape Verde should continue their advancements up the African football spectrum and seal a second consecutive AFCON birth with a positive outcome from fixtures against Malawi – considering just half a decade ago they were virtual minnows that accomplishment should not be undervalued. Runners-up in 2013 Burkina Faso have acquired maximum form in stylish fashion, results of a similar vein over the coming week against Gabon would ensure Paul Putt’s side claim their position amongst the favourites in Morocco.

After a nightmare World Cup from start to finish, many envisaged a testing group could bread yet more misery for Cameroon yet the Indomitable Lions have roared into a position from which a first AFCON showing in three attempts now looks likely. With both of their scheduled fixtures against Sierra Leone being played in the stronghold of Yaoundé – due to Ebola denying the leone stars the advantage of home advantage – Volker Finke’s side should ensure a potentially turbulent period is navigated with unexpected certainty.

Another side to endure a miserable time in Brazil are Ghana – with their campaign plagued by bonus fiascos and infighting – however in contrasting fashion to Cameroon, the black stars desolation has shown minimal sign of let-up. Coach Kwesi Appiah was to the surprise of many retained post World Cup, however a desperate draw at home to Uganda – which saw Ghana’s let known their distain – represented curtains for the maligned coach. A subsequent victory over Togo means the black stars remain on course, yet they must negotiate impending fixtures against Guinea without a permanent coach.

That point in Kumasi was the least Uganda deserved for their endeavours and having proceeded that with victory over Guinea – their apparent direct competition for second spot – the cranes are in a position where a positive outcome from their upcoming matches with Togo would take them to the brink of ending a 36 year AFCON exile.

In terms of quality the matchup of the round will arguably be played out by Senegal and Tunisia. Both can boast flawless records to date in a group that also includes Egypt, with the pair’s double header offering indications of whether either are genuine challengers for the ultimate prize. Senegal are unfortunately hindered by a plethora of absentees, however it is testimony to their rich resources that in spite of those injuries they still boast a formidable outfit.

The form of Senegal and Tunisia has left seven time champions Egypt flailing, anything other than six points from their respective games against Botswana would leave the Pharaohs in the unprecedented position of missing a third straight AFCON. Undeniably in a state of transition – the golden generation has now dispersed and a promising crop of youngsters are not yet ready to fully receive the baton – and beset by problems back home the arduous group assignment at this stage appears a breach too far for the dwindling Egyptians.

Herve Renard’s appointment as Ivory Coast boss was greeted with much anticipation yet already there is a sense of the honeymoon period coming to an end, with a mauling in Yaoundé highlighting the task facing the former Zambia boss. DR Congo – who sit alongside the elephants on three points – are next on the agenda and Renard will be aware of the requirement to pull away before the pressure mounts.

Even beyond those above mentioned stories, there are so many captivating narratives that belittle international football’s dour perception – for instance both Zambia and Angola face battles to preserve prestigious AFCON records.

If the action of a month ago is evidence to go on the impending week’s fixtures promise another hectic drama feast of African football, with January’s showpiece drawing ever closer only adding to the spectacle.