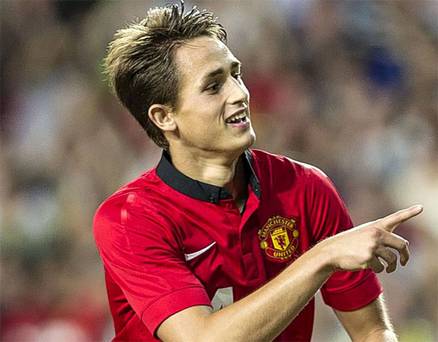 Federico Macheda is on the verge of a loan move to Doncaster.

Macheda, who scored that goal against Aston Villa in 2009, and in doing so made a vital contribution to Manchester United beating Liverpool to the league title.

The same young Italian on whom the Daily Telegraph ran a story, describing him as ‘the next Ronaldo’.

The very striker who, having made another scoring contribution against Sunderland in the next league game, earned the phrase ‘a star is born’ from the BBC.

All this 46 minutes into his Manchester United career.

In 2009 I wrote an article for another website wondering why there was quite so much clamour for Macheda so early into his career. The manner and importance of his goals led to unwarranted, and probably unwanted, media adulation. His career was immediately thrust under the spotlight and the proclamations of his future greatness bordered on the ridiculous.

Following 10 appearances for Man Utd the following season and 12 the season after, he was loaned out to Sampdoria for the second half of the 2010-11 season. 16 matches and one goal, in the last 16 of the Coppa Italia.

In 2011-12 Macheda played six times for United before heading on loan again, this time to QPR.  Another six appearances for the Hoops, no goals.

Last season he only turned out three times for his parent club before being farmed out on loan once more, to Stuttgart in the Bundesliga. 18 appearances, no goals.

This is not intended as an assassination of the career of Federico Macheda. It is merely a warning of expecting too much too soon from young players, putting too much pressure on the shoulders of teenagers before they are physically and mentally developed enough to cope with it.

For Macheda, read Adnan Januzaj. The 18 year-old Belgian made a stunning substitute appearance for the Red Devils against Crystal Palace at the weekend, making several incisive runs down the left and playing more dangerous balls into the box than Ashley Young had managed in the preceding hour of play.

It was thrilling to watch and the crowd immediately latched onto it, roaring him on every time he received the ball.

Following full time, the fans and press immediately fawned over Januzaj, holding him up as the latest child prodigy to emerge from Carrington. Having been signed up at 16 from Anderlecht, the received opinion is that now is the time for him to step into the Cristiano Ronaldo-shaped spaced vacated on the wing.

The most ludicrous of comparisons has already been drawn. By a hugely unfortunate coincidence, he made his debut 50 years to the day since George Best first turned out for United. The headlines write themselves, as they say.

Even to hint that Januzaj is a Best in waiting is scandalous. Not only is it grossly premature but extremely unfair to mention his name in the same breath as a player who is cast in bronze outside Old Trafford.

The comments on another article comparing Januzaj to Best are telling. “Januzaj is going to be a United legend” “Januzaj is very similar to Messi” “He will be one of the best players in the world”. 24 minutes into his competitive Man United career.

He could well become a world-beater. There’s a chance he will become the greatest player ever to pull on a Manchester United shirt. He might also quite equally fail to scale the heights of expectation already placed on his burgeoning talent.

This ridiculously paced hailing of new heroes is, of course, not just the preserve of the red half of Manchester. Bruno Cheyrou, the next Zidane. Kerlon, the next Ronaldinho. Ryan Babel, the next Henry.

It’s astonishing how quickly and frequently people jump on the wonderkid bandwagons. Of course it is natural to hope that your club has uncovered The Next Big Thing and that they will ascend the world game right to the very top – it’s one of the joys of following the sport.

It is also understandable that journalists will spot a story emerging around a young player and want to provide the football supporting public with what they want – more information about the kid they saw tearing it up at the weekend. It is a self-perpetuating cycle. Terrace hype leads to media hype leads to increased terrace hype.

The problem is, raising expectations can only have a detrimental effect on the player in question. Before long, people can start to anticipate performing at elite level immediately. Rather than playing with the freedom and fearlessness of youth, sometimes a young player can become crushed under the weight of pressure and media scrutiny. Is it any wonder that Ferguson and Moyes are always at such pains to ‘protect’ their young players?

There is nothing wrong with being excited about a young player with bags of potential. There is also nothing wrong with giving him plenty of encouragement when he comes on. What is wrong is seeing one substitute appearance and claiming he is on the cusp of being placed alongside two of the club’s greatest legends.

He is not the next Best. He is not the next Ronaldo. He is the first Adnan Januzaj. Let’s just hope he manages to keep his head and develop at his own pace. It would be truly saddening to see his career follow the same path as Kiko Macheda.