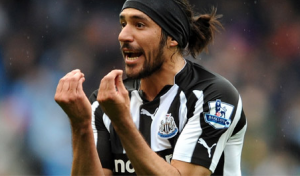 The general conception of a foreign winger in the Premier League is usually someone like David Ginola. A moody, arrogant, often lazy so and so meandering around the touchline, not really enjoying Wigan away on a cold January night; but left on the pitch as they’re one of the few out there capable of conjuring up that moment of magic to win the game…and that’s the good ones!!

It’s not very often a Premier league side will sign a flamboyant, long-haired winger from Spain and he turns out to be a workhorse, utility man, and over time, a dressing room leader. Unexpectedly, that’s what Newcastle got when they signed Jonas Gutierrez in 2008.

When Jonas arrived from Real Mallorca, little did he know it, but his arrival was about to coincide with one of the biggest sh*t storms in Newcastle’s history. Signed shortly before Fabricio Coloccini, the two Argentinians were the only signings of any real merit during a now notorious summer of wheeling and dealing that spelled the end of Kevin Keegan.

Whilst at the time, most were aware of Coloccini’s standing in the game, many didn’t know much about the winger from Mallorca – other than his apparent penchant for donning a “Spiderman” mask when he scored!

He started reasonably brightly with a lung-bursting display in an encouraging 1-1 draw at Old Trafford on his debut; but from then on sadly, Jonas’ and Newcastle’s season didn’t quite go to plan. Keegan walked, the place fell apart, Kinnear arrived, then Shearer, and of course the inevitable relegation followed.

After this promising start, and due to a large amount of contributing factors, Jonas didn’t quite kick on the way we had hoped. The biggest criticism was, and always has been, his final ball. He was great at skipping past defenders with his slightly unorthodox, long-legged dribbling style, but then infuriatingly, once in the killer position, he would fail to deliver that final ball.

Like Colo and Jose Enrique, Jonas used The Championship as a platform to really adapt himself to often harsh realities of English football. All three all had undoubted quality, but all three struggled to get to grips with the Premier League; especially whilst being caught in the toxic whirlwind of St James’ during 2008/09.

In the relatively calmer surroundings of the second tier, the ‘Three Amigos’ as they came to be known were a class above. The Championship proved to be the perfect setting to really acclimatise and gain real confidence before returning to the top flight the players we all suspected they could be.

It was during this period that Newcastle also started to benefit from the relationship developed by Jonas and Jose. The pair formed an almost telepathic tag-team down the left hand side. Without even needing to look, one always knew where the other was, or what run they were making, as the duo tore teams to pieces, first in The Championship, and then in the Premier League.

After one season back in the top flight, Liverpool soon took notice of this fine form – and of Jose’s contract situation. Initially it didn’t really work out for Jose at Liverpool and I certainly think that not having Jonas in front of him as that foil was a massive contributing factor in those early Liverpool days.

So what about Jonas, how come he didn’t struggle without his partner in crime the same way Enrique did? Well after Enrique’s departure, Jonas amended his game and evolved into a more complete footballer.

He was always capable of playing on both flanks, but over time he became a utility man, playing centre midfield and even full back when required. Perhaps most hearteningly of all, he was always happy to do so for the good of the team.

Due to that slightly lacking end product, he might not be the greatest winger in the world, but technically, he’s a very good footballer. That ability, combined with a work rate which is second to none in this league, is why he was capable of playing effectively in so many positions.

Personally, I always thought he was at his best playing in a central midfield three; his energy, strength and endless running helped cover a multitude of sins by the rest of the team. He gave the opposition no peace on the ball and helped create that extra bit of space so well utilised by players like Cabaye and Ben Arfa. As the old song used to go at St. James’, he really was, here, there, every f*****g where!

If any team is to be successful, whether it be Barcelona or Barnsley, they need a Jonas Gutierrez. A player who will run himself into the ground, a player who will play wherever and do whatever the manager asks, and do it without the tantrums and the dramas which are so synonymous with the modern day footballer.

The other major factor in his evolution is the gradual progression into becoming one of the senior members of the dressing room. After the departures of Messrs Nolan, Smith and Barton; Gutierrez and Coloccini took the mantle and became the leaders of the new look dressing room. Colo was made captain; with Jonas often used has his deputy when the skipper wasn’t there.

From a fans point of view, it’s nice to see this evolution in a foreign player. Developing from non-English speaking, big-money signings, to becoming the heart of the team and learning to fully embrace the city, the club, the fans and all that comes with it; in the same way that someone like Nobby Solano has done in the past.

It now seems that our grand master Mike Ashley has called time on Jonas’ stay in the North East. It has been suggested that Jonas has been moved out due to a clause in his existing contract whereby if he plays a certain number of games he automatically gets a new deal. This explanation does seem to make sense, why else would Newcastle allow a senior player to move to a rival and make an already small squad even smaller?!? If this is true, it seems highly unlikely that we will ever see Jonas in a Black and White shirt again.

Jonas leaves after making nearly 200 appearances for Newcastle and whilst he may not have been as technically gifted as the likes of Ginola, Ben Arfa or even Laurent Robert; what Jonas lacked in ability, he more than made up for in effort, determination and heart.

The Newcastle faithful have always loved their Number 9’s, but what we also love are those players who give absolutely everything for our shirt. Especially when it comes from those who have had no previous involvement, have come from another county, and have learnt to love our club and our city.

As Jonas departs Newcastle, it’s with a heavy heart that I wish him well, because in the modern game, players like him, well, they ain’t exactly here, there and everywhere…

3 thoughts on “Adiós Spiderman: Farewell to a true Newcastle stalwart”