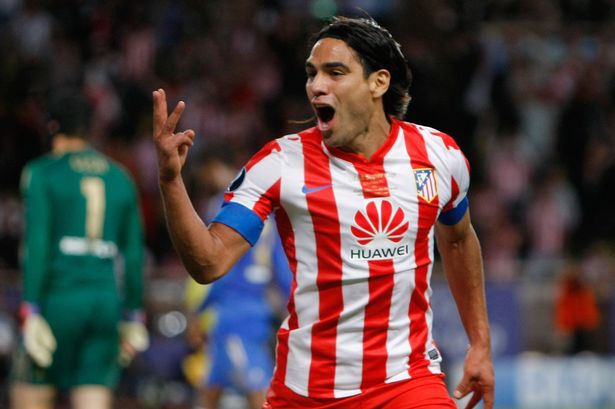 If you asked football fans to name two of the deadliest centre forwards in world football, the names Robin van Persie and Radamel Falcao would be voiced by most. So the prospect of them linking up together next season at Old Trafford is quite a tormenting thought for Manchester United’s Premier League and European opposition.

This incredible story surfaced last Wednesday when Madrid based source Marca (who cover Atletico and Real) had a front page story which said ‘Falcao, just a step away from United.’ They claimed United had already agreed a down payment in advance which is comparable to goalkeeper David de Gea’s switch from Vincente Calderon to Old Trafford in June 2011. A day later, speculation over the Colombian’s potential move to Manchester was fuelled even more when Sky’s Spanish journalist Guillem Balague tweeted that a down payment had been reached between Atletico and United.

Falcao’s agent Jorge Mendes is familiar with United when it comes to transfers. The Portuguese has helped broker deals for Cristiano Ronaldo, Nani, Anderson and Bebe. He is reported to have a friendly relationship with Sir Alex which could mean any potential deal for Falcao may not be as difficult as first thought. However a buy out clause of around £50m for the Columbian hit mans signature may be a stumbling block. £30.75m was spent on Dimitar Berbatov in the summer of 2008 which is the most United have spent on a striker in their history, if Falcao is to move then United’s transfer record will have to be well and truly smashed.

A strike force of Van Persie, Rooney, Hernandez and Welbeck is as potent as you get when all are fit and firing. Adding Falcao to that list is bordering on incredible. So if “El Tigre” does arrive, will he be replacing one of them four?

Wayne Rooney’s future has constantly been thrown up into the air by the tabloids ever since he was dropped to the bench in United’s biggest game of the season at the time, against Real Madrid. Despite Ferguson’s denial that Rooney was leaving, the story hasn’t petered out. Rooney has two years left on his current deal that he signed following the transfer circus between him and United in October 2010 so if United wanted market value for a player entering his peak, this summer may tempt United to part with a player who has served the club for 9 years. However if Falcao joined and Rooney stayed would a deeper role for the English striker be the future? Rooney has played in central midfield for United on a couple of occasion’s, as he gets older and due to his ability as an “all rounded” player, Rooney’s game at the heart of United’s midfield may well be become a distinct possibility.

Javier Hernandez’s future has also been cast into doubt following this story. Some media outlets claim United are willing to part with the Mexican in a cash plus player deal to snap up Falcao’s services in the summer. As good and as clinical the ‘little pea’ is, especially for the amount of game time he gets, Falcao is head and shoulders above him in terms of quality.

The Colombian’s goal scoring touch hasn’t diminished at all over the last few years. He has netted 22 times for Atletico this season, 7 behind Cristiano Ronaldo and 21 behind Lionel Messi. He almost won Atletico the Europa League single handedly the previous season when he scored twice in the final against Bilbao, taking his overall scoring tally up to 36 for the campaign. Chelsea don’t have fond memories of him as his wonderful hat trick flattened the Champions League winners in the Super Cup in August 2012.

Despite United’s weaknesses in other areas no one can doubt that a strike force including Van Persie and Falcao would probably lift them up another couple of levels. Ferguson wants a third Champions League crown and a ‘marquee’ signing like the Colombian would surely give United a good chance of European glory once again.

It’s only April, the title hasn’t been secured yet and the transfer rumour mill is well under way already. As this story gathers pace, this potential move may not just be paper talk after all.