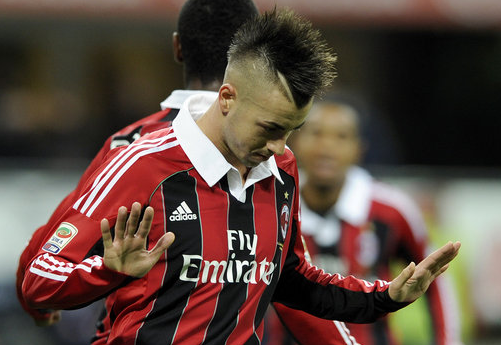 It’s fair to say that after an excruciating summer for the Rossoneri faithful last year, this season was always going to be an interesting one. It started off poorly, to say the least. Dreams of the Scudetto rapidly raced from the minds of Milan players and fans alike as they plummeted into a time of crisis.

It was beginning to look unlikely that the seven time European Champions would even be representing their country in a European competition next season. Of their first ten games, Milan had won just three, drawing two and losing five in the process. This was not the form of a Europa League contender, never mind the form of a title contender.

On October 30th, Milan found themselves 2-0 behind away to Palermo thanks to two goals either side of half time. Milan looked spineless. Nobody was willing to fight for the cause. Nobody was willing to rally the troops and push the Rossoneri through. Milan were a wounded animal. An under-performing Bojan Krkic was brought on to replace an equally underwhelming Alexandre Pato. He made a difference. On 69 minutes Milan were presented with a glimmer of hope. A goal from Riccardo Montolivo, a rare consistent performer for Milan gave them new life. Milan pushed on and equalised on 80 minutes through Stephan El Shaarawy. They even could and perhaps should have won the game were it not for a few fluffed chances in the dying moments of the game. This was a turning point. From this point on, Milan were a different animal. The beast had been woken up.

Results began to change and from November onwards, Milan were the form team in the league. January saw the exit of Pato and the arrival of one Mario Balotelli. Heads were being held high in the red half of Milan, even more so given that their run of good form coincided with a dramatic dip in form for their city rivals – Internazionale. From the 18th of November no team would pick up more points than Milan in Italy’s top flight until the end of the season.

The coming season will be different, very different. Milan have reasons to be positive.

This summer will not see any major exits like the last, primarily because they haven’t got as many big name players this year. Last year they lost the likes of Zlatan Ibrahimovic, Thiago Silva, Clarence Seedorf, Pippo Inzaghi, Alessandro Nesta, Gennaro Gattuso, Antonio Cassano, Gianluca Zambrotta and Marc Van Bommel. On top of this Maxi Lopez and Alberto Aquilani both left following the expiry of their respective loan contracts as well as a plethora of rumours surrounding the futures of Pato and Robinho. This time round their main superstar is also their latest arrival and he’s not going anywhere – Super Mario. Their young gun Stephan El Shaarawy has been attracting rumours which Adriano Galliani had, initially, firmly denied. Now however it seems he might be forced out in the same way as the superstars of last summer were. One really exciting piece of incoming transfer talk coming out of the club is to do with the potential arrival of Carlos Tevez from Manchester City – a signing which would further strengthen Allegri’s squad. The side have adapted from being focused on the above players to being focused on the likes of El Shaarawy, Montolivo, Balotelli, Pazzini. A new spine has been formed and it has been formed a lot quicker than many anticipated.

One huge plus that Milan will have for next season is simply having Mario Balotelli for a full campaign. His form since setting foot on Italian soil has been nothing short of remarkable. Scoring twelve goals in thirteen games he is beginning to make headlines for all the right reasons again and this will put a smile on the faces of Milan fans worldwide. It’s clear that Balotelli feels loved at Milan, he feels like he’s an important player to that team, something which was evidently lacking during his time in England. He is the main man now at Milan. All eyes are firmly on his footballing ability and it would appear that he is loving every minute of it. If he can take this form into next season then there is no reason why he can’t be scoring title deciding goals come May 2014.

Another factor which could very well play into Milan’s hands is that Juventus will be giving more attention than ever to the Champions League. Having found themselves to be very unlucky to come up against a wonderful Bayern Munich side this season, Juve will want to show the world that they are well and truly back after years of suffering following the Calciopoli scandal. This might well see The Old Lady resting players in Serie A matches allowing teams to take points off them more so than they did this season and thus providing Milan with a golden opportunity.

On top of these factors, Milan will have a new-found hunger, a hunger stronger than ever before to reclaim what they feel is their post at the summit of Italian football. Having seen Juventus win the previous two Scudetto’s, Milan will do everything in their power to stop it from becoming a hat-trick of league titles for their enemies from Turin. Furthermore, winning a third consecutive title is by no means an easy thing to do and Juventus will face enormous pressures which could see them crumble and the Rossoneri will be waiting to pounce at any sign of weakness.

For the above reasons as well as others, I would not be the slightest bit surprised to see AC Milan emphatically bounce back this year. The transition is now complete, the Rossoneri are ready for take off.