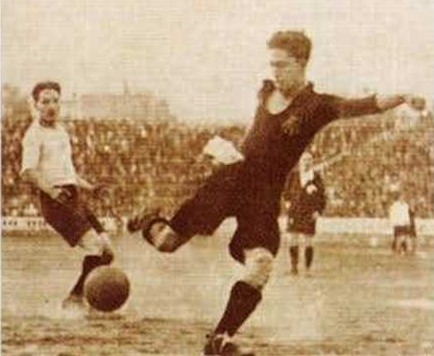 While much of the talk is currently surrounding the incumbent FIFA World Player of the Year, Lionel Messi having recently netted his 194th goal for FC Barcelona in all competitions making him the 2nd highest scorer for the world’s best club, I decided to take a look at the first.

The half-Spanish, half-Filipino man from Iloilo, Philippines that is Paulino Alcantara has scored 357 goals in 357 games for the Blaugrana famously breaking a net from one of them. This is not an attempt to make comparisons from the two in terms of form or goalscoring ability, rather a look into the lessons that we can take from what Alcantara has achieved in terms of the current setting of Philippine football and society.

I also recently came across a poem by G.P. Abrajano that illustrates some of what I want to say in terms of approaching the subject . Taken from his blog lookmaimawriter.blogspot :

El Rompe Redes, or The Legend of the Brown Man of Barcelona

Because we are the visitors,
the home crowd shows us hostility.
Because I am different,
the home team shows me hostility.

I have three defenders
guarding me at all times.

“Monkey,” they call me,
for my pale brown skin is not
olive-brown like an Italian,
my dark eyes are not
bright blue like an Aryan,
and the bridge of my nose is not
aquiline like a Roman.

They could at least be more precise
and call me “Half-Monkey”,
for my father is a Spaniard,
who married a short brown native woman
from the Philippine islands.

But to them,
my blood counts for nothing.
Half a monkey is still a monkey.

I am the only brown man
on a field of twenty-two players.

My teammates can see past
the color of my skin.
I am treated like a brother─
an equal (maybe even greater)─
because I score goals,
because I win matches,
and because they all know
I am the best player
among my white-skinned peers.

That is why my defenders look at me
with anger in their eyes
and hate in their hearts.
They will never allow
a monkey to beat them
in this beautiful game
they created.

I now have the ball,
and the defenders tighten their guard,
like zookeepers out to corral
an escaped chimpanzee,
and they hurl their tightly-woven
nets of prejudice
as they try to hold the monkey down.

But I am too fast for them.
I leave all the defenders behind,
nothing left for them to do but stare
at the number on the back of my jersey:
Number 1.

Racing toward the goal,
I cock my leg back,
and strike the ball
like the hammer of a gun,
and send the bullet flying.

I watch the goalkeeper’s
bright blue eyes,
following the ball in disbelief
as it passes through his hands
and over his straw-colored head.

And the goal’s net cannot hold my shot,
just as the zookeeper’s net cannot hold the monkey.
My bullet travels so fast
that it breaks the net completely through,
splicing the fibers that hold
the twine of reality together.

The entire home crowd
is stunned into silence,
and the joyous uproar of our visiting team
praising my magnificent monkey kick
becomes the salt of insult
that sprinkles over the wounds of their egos.

In the cheery blue eyes of my teammates,
I am El Rompe Redes─
The Net Breaker.
My name will live in legend,
and the club will pass down my story
from generation to generation.

But in the teary blue eyes of my opponents,
I will live in infamy.
They will never see me
as the player who scored the winning goal
amidst the hostile conditions
of an away crowd.
My name will be spoken with loathing,
for I will live forever in their memory
as the monkey who destroyed their net.

Are we monkeys? Have we really extinguished the derogatory and racist term that is “Indio” used during the Spanish colonial centuries? While we may have our own government and National Football team, globalization begs to differ. While we are not monkeys in any respect, the prevailing culture and economics imported from global superpowers assumes this. Is it not tantamount to calling us monkeys when the United States can unconstitutionally put an unmonitored number of US troops who commit thousands of human rights abuses and cannot be put to trial by Filipino courts? Are our courts unfit to preside over crimes committed throughout their campaign to garner military strength in the region? The country is the first to be colonized by the US in the region and is by no coincidence their largest political and economic partner for the last 100 years, a bigger investor in the Philippines than Filipinos themselves.

In the same light does the US condemn the introduction of Palestine into the United Nations Educational, Scientific and Cultural Organization, as if this historic recognition of Palestinians is somehow premature. FIFA at least considers Palestine’s existence as they have a national team while the Americans basically said Palestinian people are unfit to decide their lives and better off being bullied/bombed by Israel and the US into submission. This is eerily similar to statements by former US Senator Alfred Beveridge during the Filipino-American war that there are “not 100 men among them (Filipinos) who comprehend what Anglo-Saxon government even means, they are to be governed.” We are monkeys in their eyes by their treatment of our country, monkeys who are rattling the cages and are feared, Paulino Alcantara was feared off the pitch as well.

Alcantara was a testament to a largely ignorant time of the Filipino capacity, he did play his national football for the Philippines, and he did it on the pitch of the colonizers. Post-Alcantara Philippine football has only been met with sporadic spurts of talent yet not really cultivating the level of development that is being brought upon today. Some say it is probably due to the American introduction of basketball. Football on the other hand as I’ve mentioned in previous entries is truly a globalized phenomenon, ideally equal for all. While its origins and bulk of skill resides in Europe, there are always victorious challengers; South America is one, whilst Africa and Asia are on their way.

While Alcantara is by far neither the sole or best example for articulating nationalist sentiments, he is the biggest product of our country to typify elements of nationalism in a time when confusion over what the Filipino is was at a high. Alcantara abandoned cultural norms, which in this case separated the man from the monkey.

What then of today’s Philippine football conundrum, while Alcantara faced racism abroad, there are some local facets of the current footballing culture that condemns the “over-reliance” on Fil-Foreigners. Ethnocentrism can also be mistaken for nationalism. This contradicts our appraisal of Alcantara when obviously Skipper Borromeo and Caligdong  are equally important to the National team. Taking Fil-foreign players is not a rejection of national strength but a reintroduction of the sport taking it to its undoubtedly global appeal and character. One that is not meant to compromise national markers of the sport but to cultivate it. Globalization and the oppression that comes with it entails discrimination and we only do it favors by treating our kind like monkeys unfit to wear our colors on common soil.

All of this implies a largely Anglo Saxon view of racial inequalities, as pointed out by Elliott in his article Race, Language and Symbolism, meaning using the western notion and standard of race to judge the differences between light and dark. We did not invent racism, it was a bonus from being colonized, we did however innovate the tools of which to combat it in every sense and way possible. Alcantara’s actions and even his presence in Spain spoke magnitudes of this innovation. A history of struggle against colonialism, semi-colonialism and the culture it brings goes against us looking at ourselves through the Anglo Saxon lens as former US Senator Beveridge did.

I have no idea of the treatment Lionel Messi receives in his native Argentina but Alcantara is like many true heroes of the Philippines who are suppressed by the status quo but revived by counter-culture. In a sense I think he is the Filipino footballing equivalent of local revolutionary hero Andres Bonifacio, with the common aspiration of a man trying to break down a cage set up by an empire that calls him a monkey.

Michael "Maykel" Beltran studied Political Science at the University of the Philippines-Manila. He has been a fan of football for a while and decided to combine various insights on social realities with football. Believing that the two are invariably linked and complementary he started a blog with his girlfriend, redcards.wordpress.com. Maykel is also a political activist, involved in cultivating progressive politics, protesting local and global forms of injustice and other nationalist causes. Besides the developing Philippine football, he is also a fan of Arsenal FC and FC Barcelona.

One thought on “A Tribute to Paulino Alcantara”