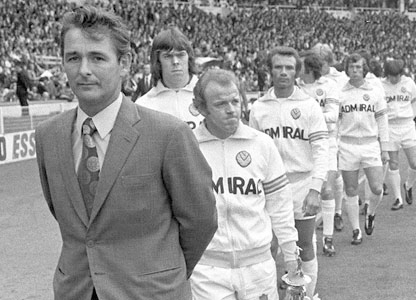 Upon strolling into his introductory press conference at Stamford Bridge after being touted by Roman Abramovich as the man to lead the ‘Chelski’ revolution, a young Jose Mourinho’s opening statement contained the now iconic quote:

“Please don’t call me arrogant, but I’m European champion and I think I’m a special one.”

Now cast your mind back a decade or so. A slowly disintegrating Brian Clough is fondly reminiscing on his romantic yet controversial affair with football management. When asked how he ranked himself compared to other managers of his generation, Clough smiled wistfully:

”I wouldn’t say I was the best manager in the business. But I was in the top one.”

Despite the years and miles that divide the two mavericks’ time in football management, the parallels that the two share in enigma and personality are astonishing, so much so that a Hindu could plausibly argue that the pair are modern-day proof of reincarnation.

As a surprisingly large amount of fans are unaware, Brian Clough was, to say the least, a very, very good footballer. Before his career was cut tragically short by injury, he scored 251 goals in 274 professional appearances for local clubs Middlesbrough and Sunderland (Loathed by fans of the former for switching to the latter!)

Despite the huge contrast in their playing careers, the wacky world of football management is where the two really intertwine. Clough was famed for his blatant arrogance, bravado and wit; a quick Google search of ‘Brian Clough quotes’ will bring up page upon page of classic Clough satire.

A similar trek through Mourinho witticisms will bring up congruent results. The two were/are often, considered to be arrogant and egotistic. Philosophers and scholars often claim “It isn’t arrogance if it can be backed up.” Should this be the case, then neither of these two can be accused of possessing such a trait. Where ever they have went, with maybe the exception of Clough’s 44 days of Hell with Leeds United, success has inevitably followed.

But perhaps the most perplexing similarity between the two was the seething hatred they had for a single club. For completely contrasting reasons, mind you, but the point still remains.

Clough’s unrestrained loathing for Leeds United has been excruciatingly well documented, perhaps most famously in the inaccurate yet quietly sublime film, The Damned United. Before infamously becoming manager of The Peacocks for a bizarre ten-week spell in 1974, Clough openly criticized the dirty tactics used by the club, and was said by some to even have a personal dislike to the club’s manager Don Revie, describing him the former England manager as “a cold man.”

During his brief but eventful spell with the club, Clough was shunned by his players, including Leeds captain and Scotland legend Billy Bremner. Granted, he did himself no favours by telling them to “throw everything you’ve won at this club in the nearest bin you can find, because you haven’t won them fairly.” The board of directors also extradited Clough, disapproving of his brash spending and confrontational attitude.
Mourinho’s antagonism in one that is definitely not as widely scrutinized as Clough’s, but is arguably one of even more malignance. Jose Mourinho has held Catalan giants Barcelona in contempt for as long as he has been a football manager. His hatred stems from back when he served as the late Bobby Robson’s assistant at Barcelona. The fans did not take to Mourinho’s win at all costs approach, and mocked the Portuguese at matches, saying he was “only a translator” (In reference to former posts held by Mourinho, and that he sometimes translated between Robson and the Players).
This deep, malevolent obsession with Blaugrana remained relatively dormant until 2010, after the second leg of Mourinho-managed Inter Milan’s Champions League semi-final tie against guess who? Barcelona. The Italian side progressed through to the final, a defensive master class shutting out the Catalonian’s in their own backyard. When the final whistle screeched through the Camp Nou, Mourinho lost control. He sprinted on to the hallowed turf and began ferociously pointing at the Barcelona fans and executives, mouthing in Spanish what lip-readers are struggling to translate to this day.

Clough and Mourinho have always had bumpy relationships with their respective chairmen. Clough would hand in resignation forms regularly, in the hope of scaring the owner of the club into succumbing to his will. This backfired when he was in the Derby hot seat, with Rams’ owner Sam Longson having enough of Clough’s constant mind games.

Mourinho also demands complete control wherever he goes; a key factor in his departure from Chelsea being Roman Abramovich’s constant interfering with transfers and team selections. His current feud with Real Madrid president Florentino Perez, over Cristiano Ronaldo, the Ballon D’or and a list of other trivial issues, seems it can only end in one way. It seems inevitable that the Portuguese will be swanking out of famed Santiago Bernabeu doors at the end of the season, with a list of suitors all across the continent clawing to snap him up when he does.

Maybe the likes of Mourinho and Clough were never meant to be liked. Some argue that all the controversies and negatives in their careers have been their own doing, but perhaps that’s part of what make them two of the greatest of all time. Mourinho was quoted recently as saying “I don’t like things to be going to well,” which, to me, sums up the mentality of these two maestros. To truly have success, in their eyes, there must be controversy; it cannot be a stroll over the finish line with everyone drowning in a bed of roses.