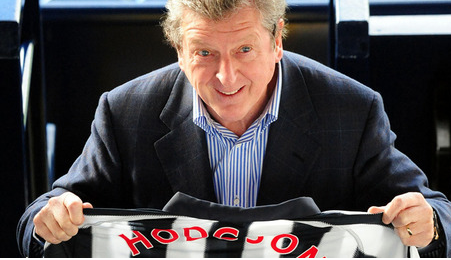 Before we all look forward to the new season, I’ve decided to take a look back at West Brom’s remarkable finish to the last campaign, in which they picked up 14 points out of an available 24 from their last six matches to guarantee another year in England’s Premier Division.

West Brom started the season at the foot of the table but by the end of it they had managed to climb to 11th; the Baggies’ best finish to a campaign in almost thirty years (they had ended the 1982/83 campaign in 11th also). It was a phenomenal achievement considering it was their return to the top-flight, having bounced straight back up from the Championship, and it consilidated their status as England’s premier ‘yo-yo’ club. Between 2002 and 2010, they were promoted to England’s top tier four times and relegated back to the Championship three times, with 2011 being the first year since 1999 that they were not involved in either a promotion or a relegation battle. It was a refreshing sight to see West Brom perform so well last season, at times challenging for Europe, and it’s one that will live long in the memories of the die-hard Baggies fans. Hard earned but deserved victories over top sides such as Arsenal, Liverpool and Manchester City, as well as doing the double over Merseysiders Everton, with an aggregate score of 5-1 were amongst the obvious highlights.

Gaffer Roberto Di Matteo prepared for their return to the Premier League by snapping up 11 players – some who had previous experience in the Premier League, some not – whose transfer fees accumalated to £3.3m (excluding the five undisclosed fees paid for further players). One of these players took to his first season in English football like a duck to water. It was Nigerian international Peter Odemwingie, who had previously played for Lille and more recently Lokomotiv Moscow, before sealing a move to the Midlands in mid August. Odemwingie competed in his first game for the Baggies just a day after his arrival and by the end of it, had already won over the hearts of the West Brom faithful with a neat finish (and winner) ten minutes from time. Little did they know that Peter Odemwingie would later go on to break their record for most goals in a league campaign, amassing a grand total of 15 goals from just 32 games, topping the tota; set by Robert Earnshaw (11) in the 2004/05 season. This feat  was rewarded by Australian confectionary business owner and Albion fan Spencer Samaroo, who had promised Odemwingie, should he score 15 goals, that he’d shower him with a hamper of Australia’s finest chocolates.

The results during the first few weeks, with the small exception of a 6-0 drubbing at the hands of Chelsea the opening weekend, were quite remarkable. After that defeat, they lost only once in the subsequent eleven games, including victories over Manchester City and Arsenal in successive games. At the end of October, they were sitting pretty, happily occupying a Europa League place. Yes, it may have been beyond belief but this wasn’t neccesarilly an act to disillusion to West Brom supporters. For god sake, they beat Arsenal and Manchester City! Only Aston Villa and Manchester United managed to repeat that feat. A defeat to Blackpool signalled a terrible run as they only picked up two wins in the following 13 games. And how did they end this horrible form? With a coincedental home win over Blackpool of course, followed by an even more coincedental winless streak of six further games. However, it was during that first ill-fated run that saw West Brom relieve Roberto Di Matteo of his duties and appoint Roy Hodgson as boss until the end of the 2011/12 campaign. The move itself was a perilios one, considering the Brit had led Liverpool down a dark path the first half of the season, but all was forgotten by the time he took over the reins at the Hawthorns. His first game resulted in a 1-1 draw with fellow relegation contenders Wolverhampton Wanderers and followed that up with another score draw against Tony Pulis’ Stoke. He then led the Baggies to a well-deserved win away to Birmingham, a draw with Arsenal and yet another victory over his previous employers, Liverpool. West Brom were once again on the up and by the middle of April they were coasting, lying in 11th and six points clear of nearest relegation strugglers Blackpool. Copious amounts of praise were heaped on Roy Hodgson and the team and by the time May rolled around they were practically guaranteed of survival. A phenomenal job was  by Hodgson and it seemed that he was finally the one to get the best of this bunch of players. 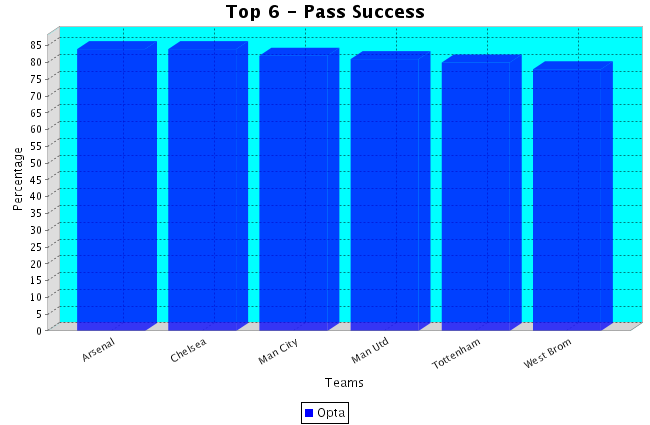 As the above diagram shows, West Brom’s pass completion was one of the main reasons why they finished in such a high position. Their 78% was among one of the best in the Premier League, behind only Arsenal, Chelsea, Manchester City, Manchester United and Tottenham. They finished above the likes of Liverpool and Newcastle, who could only manage 77% and 76% respectively. Jerome Thomas was one of the Baggies’ most successful passers of the ball, and managed to find a teammate in 730 of his 930 attempted passes – a 78% success rate. Youssuf Mulumbu, West Brom most successful passer, completed 1352 of his 1612 attempted passes – a whopping 84% success rate and among the best in the Premier League, matching that of Tottenham’s Luka Modric and Jack Wilshere and bettering the efforts Cesc Fabregas, Joey Barton and Charlie Adam. Surprisingly enough West Brom were also one of the highest scoring teams in last years campaign – in at 7th, netting 56 goals, which was above the likes of Tottenham, Everton and even Blackpool. This was partially down to West Brom’s magnificent successful final third passes in which they completed 2318 of the attempted 3469 passes (67%). This landed them in 5th, shared with Spurs, and only below the new ‘big four’ (Arsenal, Manchester City, Manchester United and Chelsea – in that order). Mulumbu again led the way for the Baggies as his 72% was one of the best among the team.

West Brom’s Chris Brunt was alo one of the top 10 passers in the Premier League last season as shown by the table above. Brunt mainly operated on the right of the Baggies midfield and had featured heavily in the ‘Key Passes’ section, averaging a brilliant 2.53 key passes per game. Brunt also came in 3rd in the ‘Total Key Passes” area where he only ranked behind Chelsea’s Florent Malouda and Bolton’s Kevin Davies. Being above the likes of Cesc Fabregas, Steven Gerrard and Rafael Van Der Vaart demonstrated hid importance to the Albion team. Brunt, often the creative hub behind the West Brom team, also racked up nine assists, levelling that of Joey Barton and only lagging behind Nani and  Cesc Fabregas, who finished on 14 on 11 respectively. Brunt often likes shooting from distance and it shows here as his Shots p/g (per game) is among the top three in the table. He almost doubles Joey Barton’s efforts who averaged a merely 1.1 per game. Brunt’s 40 passes per game was bettered only by Youssuf Mulumbu for the Baggies (47), yet another example of his significant importance to the side. He also created the third most scoring chances (86) in the Premier League last season, coming behind only (again) Florent Malouda (117) and Kevin Davies (91).

West Brom scored 56 goals in all last season in the Premier League and they depended heavily on newly-acquired striker Peter Odemwingie to bang them in. His 15 goals (27% of the teams goals in all) were a significant factor in why they finished so high in the league last term. Of Odemwingie’s 15 league goals, he scored 7 with his left-foot, demonstrating his versatility as a two-footed player. The closest Baggies goalscorer to Nigerian was again the magnificent Youssuf Mulumbu, who managed to bag 7 in 34 appearances. The closest Albion forward to Odemwingie in scoring terms was Frenchman Marc-Antonie Fortuné who netted just two goals in 14 appearnces (and 11 as a sub) and the on-loan Arsenal man Carlos Vela who netted impressively twice in 3 appearances (5 as a sub). Odmewingie’s creativity was also on display as he assisted in seven of West Brom’s goals last season, only behind Chris Brunt who finished on nine.

With Scott Carson having left for Bursaspor, Welshman Boaz Myhill now has the chance to consolidate his place among the starting 11. Last season Carson’s form became riddled with errors (five errors leading to goals in 32 appearances) and questions were raised over whether he was actually fit to continue as keeper. Boaz Myhill began six games for the Baggies last season and conceded 13 goals – five of them from outside the box. He made no defensive errors and also carried out ten saves. The former Hull Player of the Year is a more than capable replacement for Carson and with Hodgson yet to purchase a new keeper, Myhill looks set to begin the campagin between the sticks.

This season the West Brom defence also needs to pay particular attention to set-pieces as they conceded the most goals from set-pieces (30) in the League last season.  The Albion back-four shifted 71 goals last term, boasting the worst defence in the Premier League. Youssuf Mulumbu was also top of the charts – but this time for all the wrong reasons – as he was sent off twice, nestling in at the top of the table, with the likes of Lee Cattermole and Laurent Koscielny.

One thought on “A season to cherish for the Baggies”