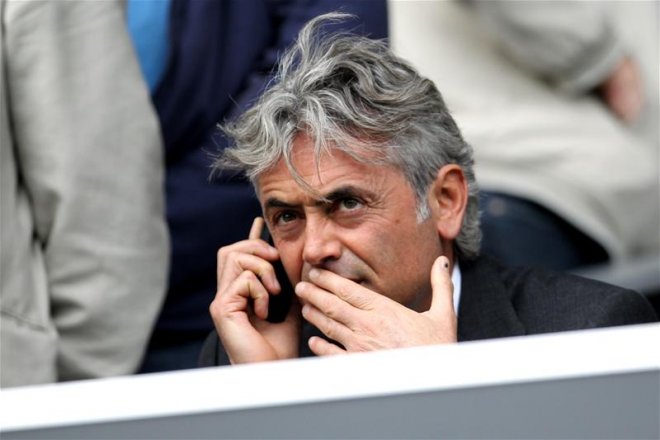 There was a moment in tennis that has so often been called ‘the changing of the guard’ that you could be forgiven for thinking it took place at Buckingham Palace. In 2001 a 19 year-old Roger Federer, in the first and only time they played each other competitively, defeated Pete Sampras at Wimbledon. Sampras was on a 31-game winning streak at the All England Club.

That moment heralded the end of one illustrious career and the beginning of another. A shift in the balance of power in world tennis.

This ending of this summer’s transfer window could be one of those moments.

Tottenham Hotspur have enjoyed an extraordinary two months in the transfer market, especially considering the highest-profile move involving the club has been their star player leaving the club.

Spurs are anticipated to recruit no less than seven first team players before the window closes – along with the already signed Paulinho, Chadli, Soldado and Capoue, have just concluded deals for Vladimir Chiriches, Erik Lamela and Christian Eriksen. The fans have seen the club reinvest most of the Bale cash already and, with more to come, they will most definitely see value for money on the pitch.

Contrast with their North London neighbours. Wenger has seen fans revolting on the stands due to the club’s inertia in the transfer market. A perceived lack of value, or a lack of willingness to spend, has seen Arsenal bring in just Yaya Sanogo and Mathieu Flamini so far, both on frees. The latest news will be of little comfort to Gunners fans – Nicklas Bendtner is set to be reintegrated into the first team squad in a move that surely anticipates the failure to sign another striker.

Not only could there be a Federer / Sampras moment in North London (lest we forget the derby is coming up this weekend), but 2013 could be a watershed moment in English football. The era of the Director of Football could finally be coming to these shores.

Many are saying that the key signing made by Spurs this year has not been a player, but a Director of Football in Franco Baldini. It has been his European contacts, nous in the market and personal interventions that have seen many of these deals closed for Tottenham. Levy’s traditional hard-line negotiating stance has still been visible, but Baldini’s stamp has been all over a number of these deals. First among equals is the anticipated £30m signing of Lamela from Roma, a deal many are already calling one of the bargains of the summer given his age and prodigious talent.

Chelsea and Man City both already have someone in a position similar to this – Michael Emenalo and Txiki Begiristain respectively are largely responsible for off-field operations – and their recruitment this summer has also been impressive, although that is tempered by the extraordinary sums of money available to those two clubs. Liverpool employ a ‘transfer committee’ to oversee the identification and signing of players, which achieved success in the early part of the window although is admittedly struggling to seal deals in the late stages.

It can be no coincidence that the two major clubs in the Premier League who have found the most difficulty in making signings are the two who still have a manager solely responsible for matters both on and off-field. Arsenal and Man Utd have both struggled to land their targets and have also betrayed a lack of groundwork in their overt moves to sign some of Europe’s major stars. The deals for Fabregas and Suarez were fundamentally flawed, leaving both clubs with major public embarrassment rather than a shiny new signing.

Gonzalo Higuain, Suarez, Luiz Gustavo, Karim Benzema, and Angel Di Maria have all been linked with Arsenal and so far none have arrived. They have been publicly burned on many of these potential moves. Information on Tottenham’s prospective deals have largely only emerged once the players are virtually through the door (Willian a notable exception, although that was something of a unique circumstance given the Abramovich / Kerimov connection).

Man Utd must surely have received some information on Fabregas’ willingness to move to Old Trafford to encourage them to make three bids, but it must have been bogus as the Spaniard never publicly stated his desire to leave and eventually told the press he wanted to stay. Another transfer embarrassment.

Chelsea and Man City have shared the bulk of the big names joining the Premier League this summer, with Spurs picking up the ‘second tier’ players. Moyes and Wenger must surely be wishing they could call upon even one of these names in their squad this weekend.

European football has utilised Directors of Football for decades. In Spain and Italy it has been the default management structure for years. Modern football is simply too large a beast, too great a demand to place on the shoulders of just one person at the head of an organisation. It is surely beyond the reach of all but the most extraordinary of managers to coach a successful side on the pitch and continually strengthen it off the pitch.

The nuances of major transfers in football are almost immeasurable – there are so many factors to consider it requires a full-time hand on the tiller. Lose your focus for a second and a rival can nip in and pinch a player from under your noses.

Not only that, but given the transient nature of football managers, having a long-term vision for the playing squad and someone responsible for seeing that through can be of great benefit to a club, meaning new managers don’t want or need to dismantle and reassemble the playing staff.

With the big teams employing Directors of Football in England enjoying such a margin over success in the transfer market over those who don’t, it will surely be soon that we see this structure replicated in many more clubs across the country.

It might be too late for Arsenal and Manchester United this summer, but a change could ensure that this year’s disappointment is not repeated in future.