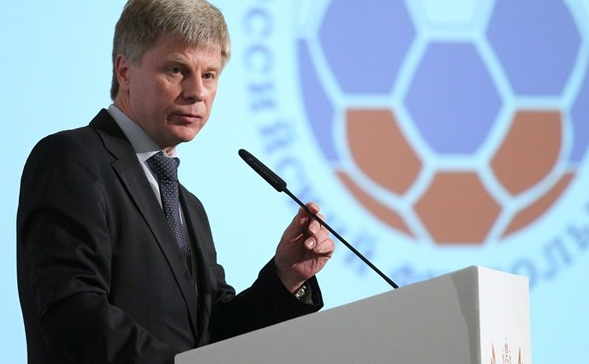 If weather is an indication of fortune, then Moscow’s unstable conditions overhead heralded a new era in Russian Football, or a descent to far worse.  The morning awoke with grey, rainy skies miserably starting the week after a changeable Sunday and stunningly clear Saturday.  Saturday was stunningly clear as the City Government had “seeded” clouds to ensure the big celebrations (City Day) would not be a wash out.  Seeding clouds is not new here.  For decades every May 1st clouds were seeded.  If even an infant cumulonimbus peeked it’s fluffy head towards Red Square, it was hammered with cement and made abandon it’s nasty attempts to rain on the parade.

Winter snow in Moscow city is likewise diverted with airplane loads of cement being dropped to ensure city streets are not choked and impassable.  In times past the story was that thin strips of silver were used to seed the clouds and only yesterday morning I was reminded of this over coffee with a friend.  Little did I know that a few hours later and it would be silver in another form that would come to the crux of the battle for the top spot in Russian Football.

Since Sergei Fursenko’s dramatic and surprising resignation following the Euro 2012 capitulation, there was speculation as to who would step up to the mark and lead football in Russia out of the doldrums to a level, given the resources available, it should be at.  A month ago today (August 4th) Back Page Football published an article about the election held yesterday.  Outside of Russia precious little coverage was given to the election and especially to the eventual winner.  We previewed the runners, riders and stakes, and called the result right.  Nikolai Tolstykh got over the line with 9 votes to spare after finishing just short in the first count, but leading from Premier League President Pryadkin by 21 votes.  The 5 other candidates dropped out and a 2nd round throwing up horrible scenarios that included bribery, stronge-arming and persuasion.

A short while earlier I’d left the metro as the weather picked up and walked from the Dinamo station (next to the “under reconstruction” Dinamo Moscow stadium) and crossed to the Renaissance Monarch hotel.  Outside lines of SUV’s and Black Mercedes waited with their drivers smoking out their windows while media vans blocked the approaches.  The closed presentations had all gone well, the delegates had voted and I was arriving to meet friend and colleague Sergei Kuzmin (delegate from the Ulyanovsk Region Football Association) to see would we be drinking champagne or beer, or handed a pistol and glass of brandy by the swaggering Premier League bosses.

Normally jovial and laidback Sergei was on edge.  Tolstykh was leading from Pryadkin but it was all in play, again.  Dropout Igor Lebedev was slaughtering Tolstykh in the media and on Twitter, saying that Russian football would be ruined with his election and that disaster loomed.  It was more than just sour grapes, he’d just missed out on a payday that would make Carlos Tevez cry, despite his anti-corruption stance he seemed to covet the power a little too much.  Rent a mouth Vladimir Zhirinovsky, head of the outlandish LDPR party (who actively auction off parliamentary seats to ensure the buyers will receive parliamentary privileges – such as not having to face extradition abroad, see Andrey Lugovoy), waded in with similar comments knowing his fellow oligarch friends would not be best pleased with a proven sheriff coming back to Dodge.  At the table next to ours the Premier club bosses frantically came and went with their handbags, looking for friends from the regions – some of whom had been blocked out of Moscow by dense fog that saw flights diverted to Nizhny Novgorod.  Many raced overland to the capital to exercise their voting mandate, arriving, they hoped, in the nick of time.  31 planes in total were diverted from the 3 main airports and there were rumours of 40 pieces of silver being paid to air traffic controllers, weatherforecasters, pilots and even city authorities (to mess with the clouds in reverse) so that those most likely to vote for the anti-establishment front runner – Tolstykh – to be kept clear of the election.

CSKA Moscow main man Yevgeni Giner, could barely contain his irritation at the table next to ours.  While his very dodgy past is now whitewashed, this assured backroom dealer and his people came and went from the table to get/spread news, cornering regional delegates and playing nice or hard as the situation called for.  Next to him Alexander Dyukov, Gazprom’s man at Zenit, looked remarkably at ease for a person who’d authorised an $82million spend on 2 players for his club.  There was a marked difference between the Premier League reps and the delegates from the furthest reaches of Russia, and it wasn’t just in their suits.  Armani and other “fashion” threads were hanging on the slumping shoulders of the money men, while ill-fitting polyester efforts were struggling to hold in the swelling chests of their regional brethren.  Anzhi owner Suleyman Kerimov was said to be personally encouraging his fellow Caucasian delegates to switch sides.  There was desperation in the air on both sides, even the words “Russian Election” make the most seasoned vote watcher tremble.

In the week running up to the election a plethora of honchos had fled their posts in the Russian FA ahead of serious financial probes.  Lebedev and Tolstykh both led the charge into cleaning house and the list of names who jumped before being pushed are worth doing a netsearch for – if only to see how high up the tree the apples fell from.  With the St. Petes “Rossiya” Bank coming under serious investigation after debts of $15million were found in the RFA accounts some serious people exited stage left:  Sergei Stepashin, Viktor Zubkov, Alexei Miller and Sergei Ivanov (to name the leading lights), as well as the resignations to be confirmed of Giner and Kerimov.  The “Krysha”/roof over the gang running Russian football was about to be removed, time was being called at the trough, or so many hoped.

Sergei got a call to go back up to the Tolstykh control room, they were about to have news.  Before he did I reminded him of the symmetry of luck I was bringing – I’d come from Dinamo Metro Station, next to Dinamo Stadium and Nikolai was/is a Dinamo man.  He was a sure thing.  He laughed and dashed up the marble steps.  To pass the time I chatted with my neighbours.  Valeri Karpin, the Spartak headman, agreed that his boys were unlucky to lose to Lokomotiv on Sunday and as I was about to ask about Aiden McGeady a text beeped through at 4pm.  “URA” – the Russian form of hooray and without realising it I laughed and said “Yes” in Maria Sharapova style (with clenched fist).  Giner, Dyukov and co cursed, nodded goodbye to us and left.  I looked outside and the sun was shining.  Karpin stayed and congratulated the winner, which showed a huge amount of grace and class from a man I’d worried would revert to Premier type.  Ill-fitting suits were bursting all over the hotel and after an inordinately long media conference the winner emerged to hugs and handshakes, his flock thrilled to have a leader they could believe in once more.

Tolstykh (the Russian for Thick or Fat) has promised to immediately reform the broken structures of youth development in Russian football so that young players will be “fit for life, not just for purpose”.  2 years ago he was shafted when Fursenko effectively outlawed the Professional Leagues Federation (below the top 2 flights) in a sop to the Premier clubs who were arguing that less professional clubs would mean better football in Russia and better players for the National team, all the while those same clubs were fielding more and more foreign players.  It can be argued, with validity, that former FA President Vitaly Mutko’s decision to step back from the race and back Nikolai swung many in his favour.  That and the dubious endorsement by Olympic Committee colleague Shamil Tarpischev, the Don of Russian Tennis, late last week gave a nudge to the undecideds.  Sergei had forwarded the BPF article to the new President so let’s believe that a month-old opinion piece did the trick.

Frustration is the most common emotion in Russian football most notably in player development.  Small clubs develop youngsters, only to have them snapped up too young and shipped off to Premier Academies that in most cases damage the youngsters beyond repair.  Nikolai Tolstykh has received the backing of the majority of regional associations and organisations, so the pressure is now on to build a proper future for Russian football that isn’t in thrall to the business needs of oligarchs and other nefarious interests.  It remains to be seen where the story will go from here, however the overwhelming belief is that the new President will not act down to his anglicised name (Thick Nick) but rather bravely lead the game to heights unknown.

One thought on “A new broom for Russian Football”