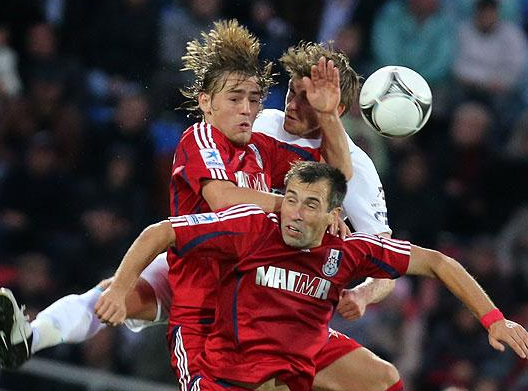 Before anyone mistakes the title with the book by Carr (made into a movie starring Colin Firth), the title is a tilt of the hat to  Turgenev’s play which centres on a lively though bored housewife who falls for a couple of handsome newcomers.  I saw the play in the Abbey more than 20 years ago and was reminded of it with the flurry of media interest in the arrival of one of the world’s most recognised French actors to an often forgotten part of Russia.  And now that the nonsense is dying down, the ending looks certain to be like the aforementioned play, a return to boredom.

While Gerard Depardieu’s decision to take up Russian citizenship and avoid higher French taxes was a surprise, it was the battle for his place of residence which caused gossip waves here.  In making his “residence” the pleasant, if normal, Republic of Mordovia,  the fight for his signature made the transfer window look as boring as it has been since opening.  However, as always with such media circuses, there are always political and sporting angles.  The Franco-Russian tug of taxes was the political angle, the survival of a football club was the sporting.  Mordovia Saransk, Premier League strugglers were about to declare bankruptcy and leave the league in November/December, which would have meant disaster for Russian football.  Saransk is due to host World Cup matches in 2018 and their collapse, not dissimilar to Sochi last year, would have given the English media reams to write about.  Instead the head of the Republic, Vladimir Volkov, worked hard lobbying the Kremlin to support the work being done by the football club and landed the most prized transfer target of the Winter.  The delivery of a passport to the big Frenchman meant some $50million flowing into the Republic’s coffers, 20% of this leaking to FC Mordovia.  Debts were paid, youth coaches maintained and plans for the new stadium continue.

The man who gave life to Obelix on the big screen appeared in Saransk a rotund and buffoonish figure, exactly what was needed for the holiday period and he duly acted the part of the grateful immigrant, if not refugee from the French tax system.  The history of Russia taking in French folk is not new, many of the towns around Moscow city (especially in the east) are named after French officers/nobles who settled there like (Fryazin was granted land which is now the town of Fryazino).  One of the greatest Russian drinking traditions was imported by Cossacks returning from the 1812 War from Paris.  Anyone who has spent time in or with Russians will know not to leave an empty bottle on the table, the Cossacks benefited financially from this in Paris, now it’s simply bad luck to do it here.  So a larger than life character wishing to life a simple life in a simple village played perfectly into the alcoholic haze prevailing from December 30th in Russia.

Mordovia is best known for it’s athletes (especially walkers), apples and cement, and as BBC slobberlingly elaborated – prison camps.  Football has only recently taken more of a hold of public consciousness and at the end of 2012 the club tried to take a step into international reckoning by jettisoning the experienced and successful Fyodor Shcherbachenko and bringing in the 134-capped Dorinel Muteanu, who left Dinamo Bucharest after one month to move to Russia.  With 11 matches to go and only 9 points on the board (they are 11 points from safety), the foreign bug will probably see FC Mordovia sink back to the graveyard league in May.  If they can manage a couple of audacious imports like Depardieu, then the team might bridge the 7 point gap to a relegation playoff spot, though that seems highly unlikely.  After the joy of beating Shinnik Yaroslavl last May to leap into the Premier and the buzz of International media humming around the Republic during the holidays, the ending could be very much like Turgenev’s play.  FC Mordovia Saransk, after all the excitement of 2012-13, return to a life of boredom outside the fun and games of Premier football.  Depardieu turned down the offer of becoming the Republic’s Minister for Culture and is now building a house, in a gated settlement in the ultra rich Rubelyovka area to the west of Moscow.  Not even a month in the country and the camera’s stopped rolling.