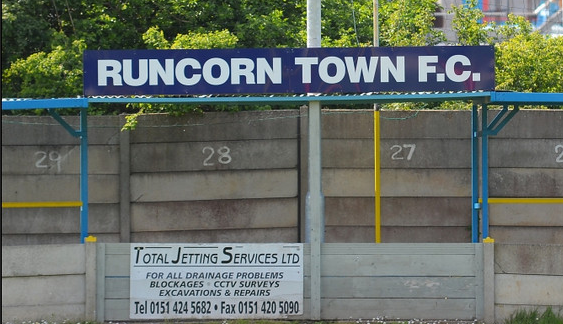 ‘It’s a Derby’. Fans of a certain age associate the phrase with vintage footage of Liverpool’s Brian Hall scoring against Everton in the Cup Semi-Final or Liam Brady bending one past Mark Kendall at White Hart Lane. TV pictures showed the homes of rival fans the night before, with that strange phenomenon, the divided family, given special attention. But what would happen if the cameras were invited to Alder Street, Atherton or Murdishaw Avenue, Runcorn, before Thursday’s Boxing Day dust-ups?

In Runcorn, the Town v Linnets tussle (referred to rather clumsily as El Clasi-corn in the local press), is fairly new. Linnets, formed by fans of the defunct Runcorn FC, moved to their new Millbank Linnets Stadium in 2010, and secured a place in the North West Counties League. Five miles away, Runcorn Town were coming up to meet them, winning promotion to the premier division in 2011 and igniting a fledgling rivalry. With both clubs contesting the title, the attendance was expected to rival the 665 who saw Town’s 2-1 win last Easter Monday.

A division lower and an hour’s drive away, Atherton LR kicked off at their Crilly Park home against Atherton Collieries in the ‘Flat Cap Derby’; a name coined by two Droylsden groundhoppers, Tony One Leg and Johnny The Rhino, and adopted by the clubs. ‘LR’ is short for Laburnum Rovers, who formed as a youth team in the Fifties, and took their name from the field where they trained. While a healthy crowd was in prospect, the Crilly Park capacity of 3,000 would not have been tested, even with the likely influx of groundhoppers.

Collieries, formed by local miners in 1916, play at Alder House barely half a mile away, and battle was rejoined after their relegation in 2008-09 left both clubs in division one. The animosity of yester-year has gone with the police unlikely to have been troubled on Thursday, with second placed Collieries the favourites against mid-table Rovers. Whatever the result, the Man of the Match was awarded a ceremonial flat cap; showing that in this part of Lancashire, competition is close but friendly.

Across the Pennines is Ossett, a town of 21,000 that supports a local side (Ossett Common Rovers) rugby clubs of both codes as well as Town and Albion, two senior clubs separated by 69 years of rivalry and half a mile of road. Town were formed in 1936, and the derby tradition developed when some committee members split away, Liverpool-style, to form Albion in 1944

The clubs met at Albion’s Dimple Wells on Boxing Day, with the home side currently bottom of the Evostik First Division North, and desperate to add to the meagre nine points accrued this season. But with Town becalmed in mid-table, Thursday’s crowd was unlikely to top the 700 at Ingfield in 2001 for a promotion-relegation decider.

Talk to non-League fans about Teeside club Billingham Synthonia and some will mention the giant stand at the Central Avenue ground. Others will allude to the chemical industry that dominates the area, with one of its products, synthetic ammonia, inspiring the club’s name. The derby with Billingham Town wasn’t a regular fixture until 1997, when the club next door completed its rise through the leagues.

With Town at rock bottom, this week’s meeting may have been the last at Central Avenue for some time. Synthonia will have kept a close eye on their neighbours, as Town’s tidy HQ is less than 200 yards away, and were hot favourites; their rivals having just one win all season, with the low points an 11-0 drubbing at table-toppers Celtic Nation and a 3-0 defeat at Newton Aycliffe, when just nine visiting players turned up.

Two hundred miles south, Abingdon – a place where bun-throwing rivals football for popularity – staged Boxing Day’s wooden spoon match between United and Town, the bottom two in the Hellenic League Premier Division. With relegation writ large, Thursday promised a testy encounter. Town’s main threat was striker Jack Ross, whose double at Wantage made him ‘Man of the Match’ on the club website. The only problem was the ten goals Town conceded; a weakness that suggested a home win.

As as Ossett, Billingham and elsewhere the real victory is the resolute optimism and independence of the clubs. And a determination to continue a noble festive tradition, TV or no TV.