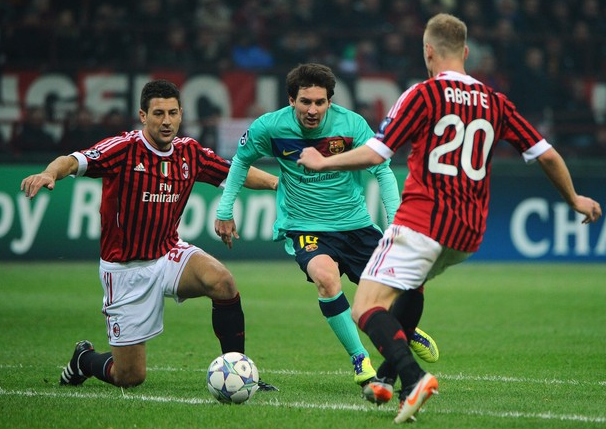 Just a few weeks back, AC Milan destroyed Barcelona and schooled them tactically, while a few days later Real Madrid did the same thing. The Milan fans thought the glory days were knocking on club’s door again; to be in the last eight of the Champions League by beating Barcelona seemed like a dream that was getting closer and closer until Tuesday’s second leg.

There is a long list of what went wrong for Milan. Last season we watched some of their great players leave. They left a large hole in the defence and in midfield, holes that can’t be filled so easily considering that these players were part of the making of the great Milan that once ruled Europe and won everything that they could.

Despite the constant pressing and pressure from Barcelona, Milan were not far from progressing to the quarter finals. They had  a huge advantage over Barcelona going into the game and had M’Baye Niang scored that goal rather than hitting the post before Messi leveled the scored on aggregate things would have been different, but that didn’t happen.

What the supporters of the Rossoneri are forgetting here is that Barcelona have an experienced squad were playing against players such as Niang, and Stephen El Shaarawy who have zero to little experience when it comes to the Champions League, and despite that they still almost managed to survive. The first leg saw Milan deploy some outstanding tactics. If the man with the poker face, coach Massimiliano Allegri, brought that back again maybe things would have been different, and most of us are still wrapping our heads around the 4-3-3 formation he switched to.

Despite all that, Milan fans should not give up yet and the future certainly looks bright for them.  Niang, a boy who’s just 18, was playing against great Barcelona players but felt zero pressure and almost scored. Milans youth prospects don’t end there, and their are more great players like El Shaarawy who will be the key to the outstanding future that lies ahead.

Milan’s squad shouldn’t be criticised or blamed for what took place on Tuesday. Since the arrival of Mario Balotelli, the team has achieved a lot. We all saw the skills and greatness from from Balo in just 25 minutes when he netted a brace of goals against Udinese on his debut. The starting three of Balo, El Shaarawy and Niang are all under 23 years of age, and have received much deserved attention in Europe.

Allegri staying or leaving the San Siro will not effect the spirit of the youth they are currently developing. When all your key players leave you cannot expect to overcome a great team like Barcelona, however, Milan still managed to get that 2-0 win in the first leg.

Time will tell whether or not the Italians can win another Champions League titles next year but they are a chance as their youth will improve and hopefully bring back the greatness and glory to the San Siro.

A lifetime of supporting the Rossoneri teaches you that it’s not always going to be easy, somebody will always be better and it keeps getting harder and harder. This squad however will change that, this is the turning point. Milan will be back.

2 thoughts on “A hopeful transmission: Why Milan losing to Barcelona is not the end of the road”