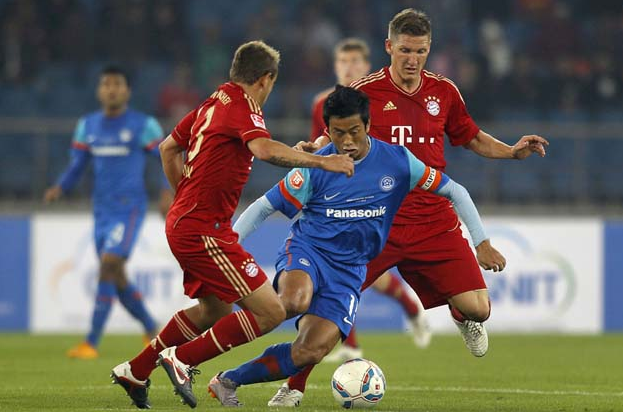 The same old curry seems to be cooking in the pot that is Indian football. With the national team at an all time low, the professional league in tatters and the federation in a timeless limbo, things are not looking up for the team that once boasted of being an Asian powerhouse.

The ‘poster boy’ of Indian football Sunil Chhetri finished a dissapointing campaign with Kolkata based side Mohun Bagan AC with just 5 goals in the entire campaign. However, the lack of quality in a local striker isnt a new feature in the I-League. The highest goal tally an Indian has been able to achieve this season is 9 goals. Foreign players, however have another story to tell.  Ranty Martins, a Nigerian national plying his trade for current champions Dempo SC, has scored as many as 32 goals. Seemingly ridiculous amounts of money are being shelled out every year for players by such clubs in pursuit of the meaningless “glory” of winning the I-League title. However, what the clubs fail to realize is the bottom line that without a suitable strategy that can be implemented in an effective and efficient manner, nothing meaningful is going to take place in the near or distant future.

Bringing into perspective the disconnect some Indian clubs have with modern football, we must first take a closer look at the previously mentioned Mohun Bagan. Year after year the club’s management chooses a select group of officials who may or may not have touched a ball in their life to “make” a team. A coach is later appointed to “manage” the side. What comes with the delightful prospect of managing a club like this is the responsibility of  not saying a word against the management. The nail that sticks out, gets hammered.

Dempo, based in the tiny state of Goa are often referred to as the evil overlords of the game in India winning the title 3 of the 5 times possible. Apart from having the distinction of winning the I-League a record number of times, it is perhaps one of the only teams that truly believes in keeping the same players together for a number of years. In 2011, they were linked to Argentine legend Ariel Ortega, better known as “El Burrito” however negotiations broke down when he wanted a 20 percent share of the merchandising revenue. The reason being that they have not yet become aware of the potential goldmine that lies in Herculean task of setting up a merchandise counter on gameday, offering fans a few mementos to take home. In simpler terms, they do not have a merchandising plan. This may seem unthinkable at first, however in India only 2 of the 14 clubs in the league  (Shillong Lajong FC and Pune FC) believe in selling shirts to the faithful.

The clubs however, are not the only entities to blame. With an on-going tussle between the clubs(Indian Professional Football Clubs Association) and the federation regarding the structure of the league and Television revenue allotments, Indian teams stand to lose a place in the AFC Champions League for the second time in two years.

All, however may not be lost as a few clubs like the above mentioned Pune FC and Shillong Lajong FC have realised the need to be more professional in their approach. Pune, which finished 5th (2 points off third) in the league boast of an impressive backroom staff frequently undertaking scouting trips through-out the country. Having realised the need for foreign exposure in the youth department, their academy team toured Nepal taking part in the recently concluded Aaha Gold Cup in Pokhara, Nepal. Their strategy of efficient management seems to be paying dividends, producing some of the finest homegrown strikers in Singham Subhash Singh and Jeje Lalpekhlua. Their reserve goalkeepers, Shahin Lal Meloly and Amrinder Singh who train alongside the find of the Asian Cup 2011, Subrata Paul have earned the reputation of being the best goalkeeping department in the region.  Apart from this, Pune FC won the recently concluded U-20 I-League, going unbeaten in the tournament. Invincible’s anyone?

Lajong from Shillong strongly believe in scouting the vastly talented North-East region of the country for youth talent, with their youngsters earning praise from even the Bayern Munich scouts while in the latter scouted India for the FC Bayern Youth Cup. Their strong emphasis on being the footballing representative in the area have also made them possibly the club with the most regular support in India with a full house in almost every game. Nevertheless, calling them the best-supported club would be foolish as the Kolkata clubs receive an attendance of over 100,000 people at least once or twice every season.

Indian youngsters regularly out-perform their Asian counterparts, but when it comes to the senior team their performance away from home are less than convincing.Beating Qatar at their home 2-1, while losing to an experimental Trinidad and Tobago 3-0. The victories in the SAFF Championship with the reality check of the AFC Challenge Cup. Perhaps all the push the Blue Tigers really need is one good year.

To the untrained eye, football in India may seem like a lost cause but as a person looks past the initial few barriers they see the reality of the game here. Like in every other aspect of life in the subcontinent, there is more to it than meets the eye. Come the rains, the cricket bats will be thrown away for some good old “keechad-ball”  which essentially means to play football in the mud. The joy that makes the game a religion the world over has not been lost, but the commercial aspect is still in its infancy. But as FIFA supremo Sepp Blatter says, maybe we really need more than one alarm clock to wake the sleeping giant.