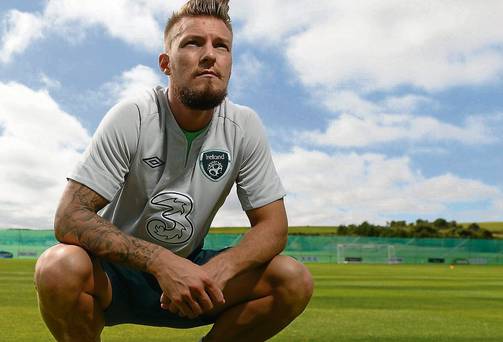 With 20 minutes left, a towering figure emerged from the bench.

From a distance, it seemed that it was the Swedes who were to introduce the archetypal, modern Scandinavian footballer: a 6ft 0in winger with an undercut, a forearm sleeve tattoo and a majestic, thatched ducktail beard.

The bib came off, he received some instructions and with a quick tug of his quiff, he was off.

Then it dawned on the Irish public: this was not another Swedish maverick; it was an Irishman, Anthony Pilkington, finally donning that famous green shirt.

Pilkington immediately caught the eye – not just for barking instructions in his Lancashire brogue or his deft touch – but because he was joining the ranks of the clean-shaven, short back and sides conservatism of the Irish national team.

Not since the flowing, Viking locks of Joe Lapira in 2007 had Irish football seen such a deviation from the quintessential Irish footballer.

Yet, just as Rickie Lambert proved his quality for England against Moldova on the same night, Pilkington’s rise to international football is far from mere novelty.

At 18 years of age and still, effectively, playing Sunday League football, with Atherton Collieries in 2006, it seemed that Pilkington’s chance had passed – amid the rapid sophistication of top-level scouting in Britain.

Yet, following moves into league football with Stockport County and Huddersfield Town, Pilkington made the quantum leap into the Premier League with Norwich in 2011.

Arriving as Norwich’s most expensive addition that season, at £3 million, for their first appearance in the Premier League in six years, the pressure was already on this 23-year-old winger.

Sure, Pilkington had established himself as a cult hero at Huddersfield – with chants of ‘Pilks, Pilks will tear you apart again’ – but he arrived at Carrow Road on the back of serious ankle injuries and had not even played in the Championship.

Yet, with Paul Lambert easing him into the side, Pilkington proved himself: netting eight times – including goals in crucial wins against Swansea City (2), Bolton Wanderers (2), QPR and Tottenham – in 32 appearances.

It was a similar story under Chris Hughton – who proudly watched the winger’s international debut in the Aviva, against Sweden – in 2012-2013 and Pilkington scored 5 goals in 33 appearances.

Yet, one doubt remained: why was Pilkington not yet an international footballer?

Of course, there was the stubborn issue of Giovanni Trapattoni’s conservatism and poor man management.

After all, to put Pilkington’s delayed selection into perspective, Wes Hoolahan – his experienced, 31-year-old team-mate at Norwich and one of Ireland’s most gifted footballers – did not make his first start under Trapattoni until 2 June, 2013.

Then, there was the fact that Aiden McGeady, Jonathan Walters, Robbie Brady, James McClean and, bizarrely, Simon Cox were already established wingers under Trapattoni.

Yet, the doubts seemed to centre on Pilkington’s commitment with the Blackburn-born winger supposedly holding out for a call-up under Roy Hodgson and England’s post-Golden Generation era.

After all, Pilkington received a whooping six call-ups to the Irish international squad in the past nine months, but had not trained once with the national team.

Regardless of the validity of the niggles and passport issues that prevented him from making his debut, Pilkington’s commitment can no longer be in doubt – having posed proudly with his Irish passport ahead of the Sweden game.

It gives Ireland yet another option on the wing, following the phasing out of the likes of Stephen Hunt and Liam Lawrence, and the retirement of Damien Duff.

More crucially, though, at just 25 and having not been tarred by the Trapattoni era, the rugged Pilkington could prove a symbolic figurehead for the new era ahead for Ireland.