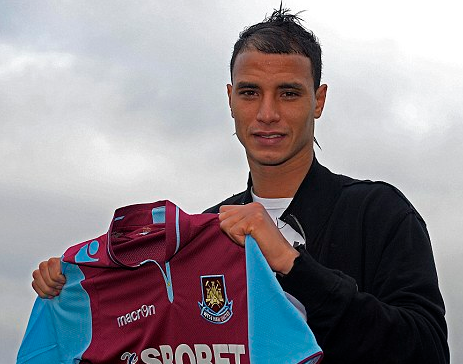 Marouane Chamakh, the French-born Moroccan has a clause in his contract for his hair product, joke some Arsenal locals upon the news that their number 29 will be heading across London for the rest of the season. Chamakh has not had the greatest reception since his arrival, widely regarded as a flop, and ardent Gooner Piers Morgan tweeting ‘Thoughts with West Ham fans at this dreadful time. #Chamakh’ moments after the deal was completed.

He seemed to sum up the mood of every Arsenal fan: apparently gleeful about the switch, albeit a loan. However, a minority of the Arsenal supporters maintain that the move is a masterstroke for West Ham; I will be evaluating the ability, and suitability, of the 28 year old.

Marouane Chamakh is not a 20 goal-a-season man; his game is not all about scoring goals, though he does that quite well when given an opportunity. No, Chamakh prefers to be up top alongside a smaller, more technically gifted player, a pairing that worked so well with Cavenaghi at Bordeaux, when he can thrive from aerial service and use his strength and football knowledge to spark attacks. At  Bordeaux he managed 56 goals in 230 appearances, not prolific, granted, but the statistic may be misleading, as they do not consider the contribution he has aside putting the ball in the back of the net.

Similarly, in his first season in England, he scored 1 goal in 4 games, an exceptional return considering his abrupt change from Ligue 1 to the Premier League, slotting into a fluid 4-3-3, with Walcott, finding a rich vein of form at a similar time, providing the ammunition. Perhaps the English style suits Chamakh better than his home country’s, yet his notorious second season at Arsenal was infamous for a reason, only finding the net once all term. However, the lack of goals for Chamakh does not seem to be due to a drastic change in ability, it appears to be born of a lack of opportunities: only appearing 11 times in the Premier League during 2010 and 2011. After sitting out for months on end this season, he may need games to settle and get back into his groove. Sadly, for the 6 foot 2 inch attacker, Chamakh may be subjected to another 6 months of bench warming and hair styling. Despite his enthusiasm to play, and adapt to West Ham’s style, Allardyce is unlikely to afford him a long period of playing time, considering their aspirations this season. No one fits the mould of diminutive and skilful forward at West Ham, probably due to the direct and physical style of play Allardyce prefers, and Chamakh’s role is likely to be to provide backup for an injury prone Andy Carroll.

Chamakh’s fledgling career at West Ham didn’t have the dream beginning either, as he was immediately in the firing line. One of the most publicised attacks being that of Chairman David Sullivan’s 11 year old son, Jack, tweeting “I am very sorry about this news Chamakh has sign a 6 month loan deal! not my pick L.” after Chamakh’s arrival. Evidently the forward was not the most popular of acquisitions at The Boleyn Ground this winter: the unhappy face says it all. However, he is used to the challenge; being left out of the Bordeaux squad in Laurent Blanc’s early reign at the club, as former Manchester United striker David Bellion attempted to reignite his career. The Moroccan has responded to Sullivan’s son since the unprovoked attack, stating that “he didn’t have opportunities to play recently” but knows he is “a very good striker”. Before adding, “I don’t want to waste any more time – I want to contribute immediately”.  He has proved that can talk the talk, now he must walk the walk.

To summarise, Chamakh has the makings of a good signing; as he proved in his first season in England, but, as he constantly remind us, he is most effective with a partner: not Big Sam’s style. He would be a more sensible purchase at a team needing a target man, not a squad with an abundance of them, namely Carroll, Cole and Maiga. Nonetheless, he has a passion and determination to succeed, understanding that he is at a stage in his career that requires playing time. One opportunity and the Moroccan will pounce, but will he get his chance?