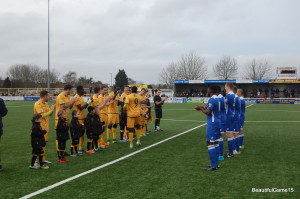 A crowd has gathered waiting for the teams, two or three deep up against the railings, as they appear people try to get a glimpse of the ‘400 man’. As they make their way out a fan loudly offers his support “Good game today boys!”. He receives a nod of appreciation from a player as he passes, Sutton’s captain does his bit as well, “Come on yellows!”.

“Dundo’s gonna get ya, Dundo’s gonna get ya!” sing the fans as the man of the moment appears, getting the biggest cheer of all. He walks between a guard of honour formed by both teams, occasionally stopping to shake hands with various players. We’ve been told there are going to be up to twelve separate presentations, which get underway in earnest. Dundo is handed a picture, flowers, multiple bottles of booze – including some Malibu – and stands smiling next to a large yellow banner with him on it. One presentation is made by a fellow member of the 400 appearance club.

Paul kisses and hugs his daughter on the edge of the pitch as the voice over the tannoy announces it’s time to “hand over to the match referee”.

“Come on blues!” shots someone from the very healthy travelling support, who have a large flag hanging over the railings around the pitch.

Our view is slightly obscured by the dugout, so we make our way around the pitch to the already noisy home fans behind the Dartford goal. The short walk is ever so slightly impeded by a boisterous young boy, there are other words that could be used to describe him, but I will leave that to your imagination. “Are you a Dartford fan?” he sneers, “no” I reply, “good” says the pint sized oik.

A Dartford penalty appeal in the first moments of the game is waved away and the game quickly descends into a bit of a scrappy one. The home side do get a chance from a free kick, which is well struck but equally well saved, but each team is restricted to half chances at best.

Standing behind the goal of the pink shirt wearing Dartford keeper, it reinforces how much I think its  a great colour for a jersey. There is something very Serie A, very Gianluigi Buffon about it; though one Sutton fan is perhaps not as enamoured by it as I am, “You pink bastard!”.

The referee quickly plummets from the top of each set of supporters Christmas lists after a string of odd decisions. One tackle in particular, or “assault” as Tom describes it, goes unpunished. The fans around us are less than impressed “you don’t know what you’re doing!”, one fan describes him as a “right package”, whatever that means.

Thankfully there is enough going on around us to keep us entertained, the group of fans on the terrace are good for a song, it’s a mixture of the familiar “come on Sutton, come on Sutton”, and the not so familiar, “singing pie, pie, chippy, chippy pie”. 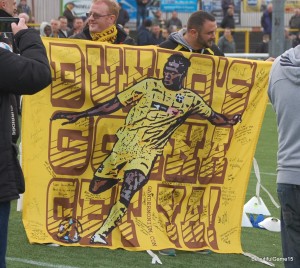 next to us, “He has socks on, but is he fucking mental?”

Dundo uses all his experience and size to shrug Dartford players off the ball and on the half hour mark Sutton have the best chance of the game so far, and it’s wonderfully crafted.

A cross from the right is knocked down to a player in the box, who plays a short square pass to the edge of the area. “Got to be” says Tom as the player tees up his shot, which he tamely fires into the arms of the keeper. The creativity is appreciated by everyone, “United, United, United” rings from the main stand along with the distinctive noise of the clappers.

In the last five minutes of the half the “tight top four game” as Tom describes it, has a flourish of chances, all for the home team. Firstly a header just wide that sends the keeper sprawling, “time to score boys” advises a fan. Dundo hits a nice volley after latching onto a flick on, that is just deflected wide. The resulting corner is played short, a quick one-two, and original taker just on the corner of the area lets fly a curling right-footed shot, that sails over the Dartford ‘keeper, only to be kept out by the underside of the bar, crashing down the wrong side of the goal line.

The compulsory half time non-league leg stretch goes off without a hitch, as the fans swap ends. Tom spots a man with a thermos flask the size of an artillery shell that reminds him it’s my turn to get the tea, but the queue at Roses is too long, so I sherk, and tell him I will get them once it goes down.

Chants of “Come on you U’s!” are followed by the now familiar clack-clack-clack, all whilst ‘The heat is on’ from Beverly Hills Cop plays around the ground, as the teams come out for the second half.

It’s a fan rather than a player who shows the first skill of the half. In his black and yellow bobble hat, he volleys a clearance back on to the pitch, with his half-time snack still in hard. “He managed to keep his chips!” notes a visibly impressed Tom. The fan raises his hand and socks up the adulation from all those who witnessed his sideline skills.

It’s all Sutton early doors and they have maintained the momentum they had started to build at the end of the first half. A player who we saw last season at Cray Wanderers, where his talents really shone, tests the DFC keeper with a powerful shot from just inside the left corner of the box, which is forced around the post, “Tom Bolarinwa, Tom Bolarinwa!” chant the supporters.

Like a cork bursting free of a bottle, with just over a quarter of an hour gone, Sutton’s mounting pressure finally culminates in an exquisitely assisted goal. A cross from the right is timed perfectly with the run of the forward who is being flanked by two defenders. Such is the quality of the delivery, the first defender can only watch the ball sail over him. The second defender is also a spectator, as the Sutton attacker controls the ball and pokes it in on the half volley from close range. 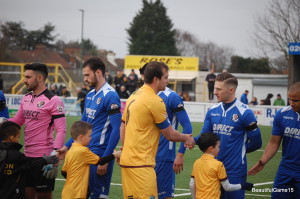 The hoardings take a battering as the fans rush the fence, banging away to make even more noise. The scorer has wheeled away behind the goal, high fiving the fans.

Sutton, perhaps still reveling in their goal, almost undo all their hard work moments after the restart. Only thanks to their ‘keeper, who pulls off a point blank save following a Dartford corner, does it mean it’s not all square. “There’s only one Ross Worner!” sing the appreciative fans.

About five minutes after the first goal Sutton get a second, and it’s the least that they deserve. Another cross, another knocked down ball, the first shot is blocked, but the loose ball bobbles about just inside the six yard box and is a simple tap in. The hoardings get a kicking again, “falling in love with U’s, U’s, U’s, U’s!”.

A third goal nearly follows quickly after, only for a super one handed save from the Dartford goalkeeper. Dundo “wants his goal” notes Tom, and, as the clock ticks down, his runs into the box seem more and more frequent.

One of the ladies from the club shop stands in a doorway, taking in the “big game’s” final moments. A few people start to leave and get a bit of stick – “is there a fire drill?”

With the three points now all but secured, a victory over top place rivals, means songs in the stands turn to thoughts of promotion – “We are going up, we are going up”. One fan is particularly boosted by the win, the current thirteen league game unbeaten run means that perhaps he is quite right when he proclaims “We are unbeatable!”. The fact is that today’s visitors were on an equally impressive eleven league game unbeaten run, proof that the value of today’s victory cannot be underestimated.

A big crowd once again has gathered around the tunnel cheering the players off, “We’re proud of you” says one fan, the players repay the compliment by applauding what has been a fantastic crowd. The biggest reception is of course for the 400 man. The Dartford squad contemplate the loss with a huddle on the pitch. Once the players have disappeared, the fans follow them down the tunnel doing a right to the bar instead of a left to the changing room. The bar is already heaving, one chap stood at the back is forced to use binoculars to catch up with the day’s result on a small TV high on the wall.

We are lucky that Paul Doswell gives us few moments of his time, escorting us to the media room, where quite by accident we end up chatting in front of the media board, with Tom taking pictures, for a brief moment it all feels very ‘Match of the Day’.

His assessment of the day is bang on, “first 15 minutes of the game Dartford had more of the play”, but after that there was a noticeable shift in 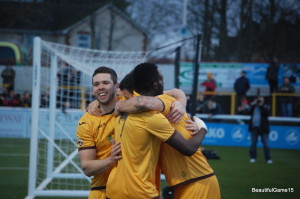 “momentum” and SU “pinned them back on the ropes”.

He is emphatic when he says it’s an “important win”. I ask him if even a small part of him is able to think about promotion or the playoffs, but he has been around too long to make that mistake, he won’t let that cross his mind until March. He fully expects “Dartford to be there with us”, but today Sutton “were better, all over the pitch”. His praise is not only reserved for the team, and makes the point of praising the atmosphere which “was a good advert for the National League South”.

As we leave we bump into Sutton’s Tom Bolarinwa, whose own career is worth a blog in itself.  I’m sure it’s not everyday a player moves from playing in Thailand to non-league football in England. He is humble and welcoming as everyone has been, and is more than happy to share his thoughts when I ask him what kind of impact a good home support can have, “Sometimes you just don’t feel up for it, but when the people get behind you you can’t help to be”. By his own admission it’s been a slow start but he has kept his head down and is taking to the step up well.

The park is now dark as we make our way home, a large full moon hangs in the sky. Tom who is always good for a quote sums up the day perfectly, almost too perfectly – I wonder if he is at home practising – “good game, good club, good victory”.