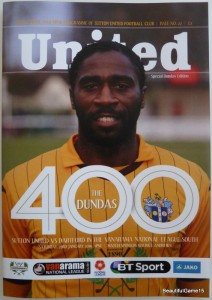 From one end of the Northern line to the other is how I start my day. Tom is prompt as ever, standing outside the station, as I drag my cold affected body into the light, on what in compared to recent weeks, could be considered as a ‘nice day’. Seeing an old friend you might expect a “hello” or a high five, but Tom decides to inform me “They have a Wimpy”.

‘They’ are the people of Morden – no not the place that the ring must be tossed into – and as lucky as they are to be able to enjoy square burgers and the novelty of crockery in a fast food restaurant, we don’t have time for a milkshake as there is a bus that needs to be caught.

It’s not cold and it’s not raining, so a short walk through a park not far from the bus stop is quite a pleasant one. People have ventured from their houses, marveling at a yellow thing in the sky, some kids are in the skatepark doing a bit of synchronized scootering on a half-pipe.

The usual things greet us at the entrance to Gander Green Lane home of Sutton United FC – a board telling us the next fixture and kick off time, the fact that AFC Wimbeldon Ladies team play here, something we are seeing quite frequently like at Borehamwood and Staines. The party animal in Tom though is quick to see a relatively small sign in comparison to its much larger neighbours, advertising the nearby ‘Boom Boom Club’. Inspecting its upcoming events he is sad to learn that “We have missed ZZ Top” but his mood is improved by reading it’s “Mods tonight”.

It is impossible as we walk through the car park to pick up our tickets to ignore the splendidly adorned shipping container, not unlike the one at Clapton FC’s Old Spotted Dog ground. I’m sure it’s use is a very practical one, but instead of having some great eyesore ruining the surroundings, it’s been graffitied extremely well – this isn’t some arse spraying ‘cock’ on the wall, this is art. One end is like a yellow and white Battenburg cake with SUFC in each quarter and along one side is the club’s crest and “For the fans, by the fans, come on you yellows”.

My own raffle addiction is well documented its a problem I live with day to day, and I’m not one to shy away from talking about it, you might call me the Tony Adams of the raffle world, but SU are not helping the problem when almost instantly on arrival the friendly man on the door or as I call them ‘pushers’ is on me, he can sense the loose change in my pocket.

“Afternoon can I tempt you with a scratch card?” he hits me with his much used opening line “Sutton’s very own” he draws me in, “50p a scratch you could win a grand”. I’m like putty in his hands, “never know your luck”. Next thing I remember is turning to a disappointed Tom with two cards in my hand.

‘Welcome to SUFC’ is written above the door as we walk in the bar past the club’s hall of fame. We both feel underdressed and underage, as 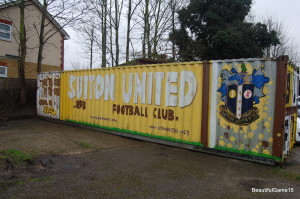 almost every man is in a club blazer and tie and with a few exceptions most people have about 20 years on us. Whilst everyone else is on the pints, Tom and I are on the tea and grab one from ‘Jenny’s’ below the blinking blue and red ‘open’ sign at one end of the bar.

“Time for lunch” announces a well turned out man, and the room empties, Jenny’s closes too, much to Tom’s annoyance, as he had only just said “I’m getting a bit peckish”. So it’s us, the guy at the oche, Norwich vs Liverpool on the TV and further proof that non-league tea is hotter than normal tea, because we still don’t dare take a sip. We both wonder what is happening in the very grand sounding ‘Times Square Lounge’ after spotting a sign on the wall. If it’s like the Times Square of the late 70’s early 80’s it could be very interesting.

We swap our stalls in the corner for a table in the middle of the room, and Tom studies the menu from afar, he lets me know that ‘Jenny’s Healthy Chicken Wrap’ would fit my new outlook on a healthier lifestyle.

A group directly behind us are as uninspired by the game on the TV as we are and have set themselves the goal of working out a starting 11 consisting of players with only three letters in their surname. Although not struggling for ideas, plucking some names deep from football history, I can’t help but chip in with the name of the first person I had on a Spurs shirt – Ruel Fox, “good shout” replies one of them. Their game is momentarily interrupted by the Sutton Manager Paul Doswell in a long dark blue jacket after he asks the room if anyone has a “laptop”.

Tea done and outside. “Impressive stadium” says Tom and I could not agree more. The main stand from which we have emerged is huge, all seater, and almost the full length of the pitch. Taking up a seat in the front row as Tom has a wander, there is a bit of a gap between me and the pitch, as well as the dugouts, but my elevated view stops that from being a problem. Behind each goal and the opposite side are standard covered terraces.

The most interesting feature by far are the two curved banks of uncovered concrete steps with yellow railings on two of the four corners of the ground. They have the air, as Tom puts it, of being very “European” it’s not hard to imagine seeing a Tifo display or some coloured smoke pouring off it at kick off – the Curva Sud of Gander Green Lane.

Two games are being played on the 3G pitch – one team in Barcelona shirts are, according to one person, “struggling”. He finds the fact that a bunch of kids in the Catalan kit not playing well is such a hoot, a juxtaposition so noteworthy he has to say it two or three times, waiting for a laugh, which never comes. I’m a little distracted by the Millwall flag flying in a nearby garden, which is not out of the ordinary, but I always find the fact that someone has had a flagpole erected a little unnerving.

Both of today’s squads sit in their respective dugouts, their kit bags littering the ground. From behind they all looking very similar, each with almost exactly the same hair cut. Tom, a barber himself, ponders if they are “sponsored by Brylcreem”. 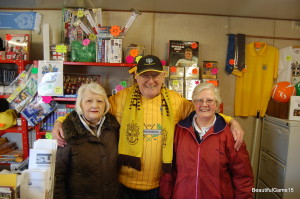 bustling. A boy in a red apron pushes a trolley heaving with bread, a man appears with a box full of SU yellow ‘clappers’ and starts to place them on the seats in the stand. Tom notices that the “Banging tunes” have started in the changing rooms beneath us, but more importantly points out that Jenny’s has a “bit of competition” bringing to my attention ‘Roses’ a second burger bar opposite the main stand. Is Sutton big enough for the both of them?

With some time to kill we head to the club shop, a yellow portacabin behind one goal protected by a high net. Standing outside it’s not long until Tom emerges beaming “It’s a treasure trove!”. Seeing as I have not seen him this happy since his Pot Noodle at Edgware Town, I have to check this out for myself.

An older man head to toe in Sutton United FC gear is barely visible behind the overflowing counter covered in boxes full of programs from clubs all over the country, surrounded by cork boards covered in football pins and shelves of DVDs and books. Sutton towels, scarves, shirts and flags hang from every available place in this non-league Aladdin’s cave. My eye is drawn to a large World Cup ‘90 book, with a picture of Gazza on the front, its price is, as with everything else, written on a neon star shaped piece of card.

If the scratch cards weren’t enough to take in one day, one of the two ladies talking about “the big game”, breaks away from her chat and offers me a 50/50 ticket, and like the chump I am, I hand over a couple of quid, hiding the tickets in my notebook, hoping Tom has not seen. I can’t take the judgement.

As I leave, the question of who the Jenny of ‘Jenny’s Cafe’ is, becomes crystal clear thanks to a poster on the back of the club shop door. Having thought she was the lady who runs it, it is in fact the name of Sutton United mascot Jenny The Giraffe, who apparently is being entered into the ‘world famous’ mascot grand national. It does make me then wonder who Rose is. Perhaps another member of the mascot menagerie?

The noise of change dropping into the float of the girl on the turnstile, the clunk as she unlocks it, and the click as it turns can mean only one thing – the fans are starting to arrive, including those of today’s away team Dartford FC.

Paul Doswell is clearly hands on and is constantly on the move. We get a passing but very warm welcome, as he makes his way on to the pitch, he moves around talking to people clutching his mug. He chats to some of the children finishing their game, and then with a member of staff about the clappers, asking about their whereabouts. He only stops for a moment in the dugout to have a drag from his vape cigarette.

Having now seen various stations of clappers around the ground, inviting you to take one, they are clearly a big contributor to getting an atmosphere going – very encouraging that the club are actively trying to improve it.

‘The Never Ending Story’ by Limahl plays as the team comes out, followed by 80’s hit after 80’s hit. “The sprinklers are out” comments Tom, 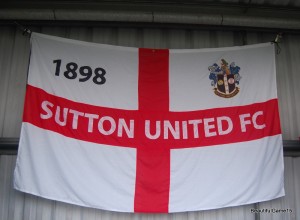 spraying high and wide, giving the pitch a good drink with some players are hesitant to get wet when they chase a loose ball.

“I don’t usually butt in this early” says the voice on the tannoy half way through another 80’s classic. Such is the absurdity of the Norwich Vs Liverpool result, which was 0 – 1 to Liverpool when we left the bar, he feels he must break with protocol and announce it has ended 4 – 5.

A noisy mob of tiny Sutton kit-wearing mascots appear from the tunnel and are corralled into posing for a picture. Today is the 400th club appearance of what I think is fair to say club legend Craig Dundas, this milestone along with it being 3rd vs 4th in the league means that the main stand and the rest of the ground are “Filling up nicely” as Tom puts it. The clappers on the seats are already being brought to life and the atmosphere is bubbling up nicely.

A man in a long black DFC coat chatting at the edge of the tunnel, tells them he has “Got to gee them up” and makes his way to the changing rooms.

Be sure to check back tomorrow for Part Two of The Beautiful Game’s trip to Sutton United FC.