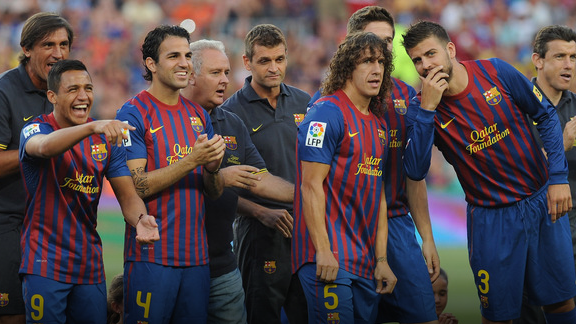 4-3-3 is becoming an increasingly common formation for different clubs, and has most notably been popularised by Joseph Guardiola, and now Tito Vilanova’s Barcelona, as well as enjoying success at Arsenal and Chelsea in the past. A variant on systems used in Dutch football, the 4-3-3 is primarily defined by its fluidity and movement, with a team having to work closely together to avoid being caught out on counter attacks, while being able to switch roles in order to create an unpredictable attacking formation. However, and while 4-3-3 has been adopted at many Premier League and other clubs, it does come with some significant risks.

While versions of the 4-3-3 were used by Brazil under coach Aymore Moireira at the 1962 World Cup, the tactic itself really took off as part of the Dutch ‘Total Football’ approach in the late 1960s and 1970s. A fluid system involving players being able to combine excellent positional awareness with the ability to press teams high up the pitch, a back four with wing backs pushing on, a central three with a defensive midfielder dropping back to support centre backs, and a triangle of attackers with a target striker became the basis of the approach.

The Dutch style was later adapted in Spain by Johan Cruyff for Barcelona, and was further modified in the 2000s. A key proponent of a modern 4-3-3 has been Jose Mourinho, who adopted a more counter attacking style, with an emphasis on pace and power, when at Porto and Chelsea. Mourinho was particularly able to rely on the positional strengths of Claude Makelele, and the supply down the wings of Arjen Robben, to feed Didier Drogba, and ensure that Chelsea were able to maintain a high intensity game when in possession.

The 4-3-3’s strengths as a way of allowing players to swap positions and employ a close passing game has, however, been best demonstrated by Barcelona, where supreme awareness between players has made them the most potent side in the world over the past few years. The Barcelona system again relies on pressing high up the pitch, attacking wing backs, and the ability for a three part midfield to switch, drop deep, and link up with two wide men and a central striker, or in Barcelona’s case, a deep lying ‘false No. 9’ in Leo Messi. Versions of the tactic are also employed by Arsenal under Arsene Wenger, and by Brendan Rodgers at Liverpool to encourage a varied attack.

While particularly suitable to technical, attacking sides, the 4-3-3 has also been modified into a 3-4-3 by Premiership sides like Wigan to make the most of a mobile defense and midfield. Adjustments have also been made to the tactic to suit more of a 4-2-3-1 striker pairing, with an emphasis on deeper play. The 4-3-3 can also be exposed if players don’t have the athleticism and tactical awareness to maintain movement, or if the careful possession it demands breaks down.

Brendan Rodgers, who employed a high line and 4-3-3 at Swansea, has faced problems so far in adjusting his Liverpool side to be able to mount attacks on the break without leaving gaps at the back. Andres Villas Boas, who worked under Mourinho, has similarly not had the best start with making the tactic work at Spurs. Many managers still view the 4-3-3 as a potentially productive, but also risky tactic if they don’t have the players to deliver the high demands it requires, and it’s unlikely that it will become as common as 4-4-2, or the more conservative 4-2-3-1, or 4-1-3-2. In this way, while many clubs have experimented with the tactic as a way of boosting their attacking options, the danger of it backfiring remains a problem.

Liam Ohm is a regular football blogger with a keen interest in the future of football. He recommends watching football on TV with Live Sport (see link below) for detailed listings of where you can watch sport!