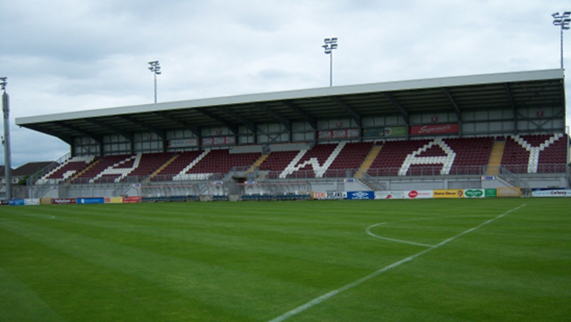 The move caused considerable controversy, not least among the visiting players. Groningen player Hank Hagenauw reflected on the mood amongst the Dutch side when they saw facilities in Paul Keane’s book Gods v Mortals: “We…went to the pitch in Galway and what the hell! I think, ‘Where are we going to? Maybe we’re on the moon!”

The GAA – who had refused an earlier request from Galway to play the match in the huge Pearse Stadium – viewed the move as a sleight. The pitch in Carraroe was a communal one but had been primarily used for Gaelic games – leaving some sullied reputations in the Galwegian GAA.

That audacity shown by Galway United in breaking through the deference shown to the GAA once embodied the club. The very inclusion of the club in an expanded League of Ireland- in 1977 as Galway Rovers- was audacious enough. Galway was, and is, a city dominated by hurling and Gaelic football. Having a League of Ireland football club there was always going to be a struggle.

But the Tribesmen have an enviable trophy haul from their short history in the top level of Irish senior football- one Premier Division, one FAI Cup, two League Cups and one First Division. There have been highs and lows out west – from hosting Groningen and Odense to the current financial doldrums it finds itself in. But these have always been hallmarked by that thing- audacity.

Perhaps it was an ounce of that Galway intrepidity that saw them make strides towards becoming more professional in the last five years. In recent years they gave young managers like Ian Foster and Jeff Kenna their first chances in management. The club expanded Terryland Park and its youth structures, signed some relatively big-name players and appointed Nik
Leeson (the man who brought down Barings Bank) as financial director. Leeson moved up to become CEO in 2007, just as the club won a surprise promotion back to the Premier Division.

In that promotion-winning season, over 3000 people went to Terryland Park for the defeat of second-placed Shamrock Rovers. Last week, things could hardly have been more different. Not even a thousand people went to the Connacht derby with Sligo Rovers for one of Galway’s biggest gates this year, with more than half of them away fans. The home side were duly thumped 8-0.

On the pitch, matters have reached a nadir. United announced last month that all of their players were to have their contracts cancelled. Several of the clubs higher-profile players, such as Shaun Maher, Joe Yoffe and Barry Ryan have since left with other clubs eyeing up those that remain. Galway are left with a squad of youngsters.

This season had began well. The Tribesmen opened with losses to Dundalk and St. Pats, but went on to beat Bohemians in Dalymount and draw at UCD. Only another point- against fellow strugglers Drogheda United- has followed since.

So what exactly is going on? The club is reportedly saddled with a debt of €1.2 million after years of overspending and a group of fans has taken up the daunting task of paying off the debt
and running the club. The Galway United Supporter’s Trust (GUST) models itself on the groups which have worked in fan-run clubs in England, such as AFC Wimbledon and Brentford, as well as the 500 Club- who saved Shamrock Rovers.

Parallels have been drawn between the situation at Galway United and the one at Cork City. Cork City went bust in 2008 after years of financial mismanagement. A group of fans called FORAS then resurrected the club, who now are contenders for promotion from the First Division.

From an outsider’s point of view, one of the strange things about Galway (and one point where it differs from Cork) is that it has three League of Ireland clubs. The other two, Mervue United and Salthill Devon, were only admitted to the league in the last three years and both play in the First Division. Most weeks, the two clubs get a combined gate of under 500.

Is there really room for three senior clubs? While Mervue and Salthill don’t sap the Galway United fanbase to a significant extent, both are among the top clubs at youth level in the country. A glance through the players who have come out of the county in recent years shows that most played for either Mervue or Salthill at youth level.

You have to feel that football in Galway could benefit from the ambition shown when they moved the Groningen game to Carraroe in 1986. Why can’t Mervue and Salthill be the feeder clubs for Galway United at senior level- with all three retaining their independence? A similar structure seems to work over on the East Coast- where Bray Wanderers have received a steady stream of talented young players from youth club St. Josephs. So successful has the Bray- St.Josephs link been that Kenny Dalglish this week formalised a link between Liverpool and Bray.

Risk-taking is important in football, as it is in business. Galway have discovered that risk-taking can work both ways – but surely a logical approach for revitalising football in the west’s biggest city isn’t a risk too far.