UEFA’s recent report on club benchmarking confirmed the League of Ireland as Europe’s most competitive league, with eight difference champions over the previous ten seasons.

Stephen Kenny’s Dundalk somewhat rained on that parade by unfashionably retaining their title for a second successive season with four games to spare, but a thrilling run-in that saw seven clubs vying to avoid relegation in the final three weeks made for another truly unpredictable series of events. 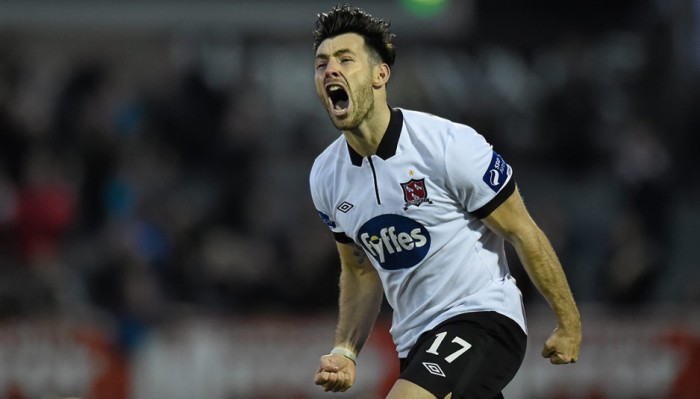 My team of the year, while not matching the seven-strong tally the champions counted among the PFAI Team of the Year, does acknowledge Dundalk as clearly the strongest outfit with three of the XI coming from Lilywhite stock.

Dundalk’s unique team ethic probably counts against them in this regard – it’s hard to stand out in such a complete team – but with players from seven of 12 Premier Division teams it is undoubtedly representative of the quality on show.

Drogheda United’s Micheál Schlingermann has rightly turned heads for a number of eye-catching performances behind a defence that’s rarely warranted such a description, but 62 goals conceded and just four clean sheets makes his inclusion in the PFAI team a difficult sell.

Bray operated in a similar state of optional defence for much of the season, but became one of the league’s meanest rearguards in the second half, much of which is down to the form of Cherrie, who only joined the Seagulls in July after being released by Cliftonville.

A title-winner last season with Dundalk, Cherrie no doubt had a point to prove after being replaced by Gary Rogers and – while he remains prone to the odd lapse in concentration – he’s been the clear standout performer between the sticks.

Rumours circulated at the tail-end of last season that the Lilywhites’ lightning-quick full back was destined for the UK and – now that he’s passed the age of 23 – he’s all the more likely to make the leap as his parent club won’t be due compensation.

While the league has seen plenty of class down his flank in recent years in the form of Ger O’Brien, Simon Madden and, most recently, John Kavanagh in Cork, Gannon has been a model of consistency in his two years at Oriel Park.

He even popped up with a vital goal against his former club, Shamrock Rovers, in a tie at Oriel that went a long way towards confirming Stephen Kenny’s side retained the title for the first time.

While Gartland’s leaner and more athletic central defensive partner Andy Boyle has rightly been lauded for his part in Dundalk’s renaissance as a side that plays football from the back, the less fashionable but no less effective Dubliner has been a rock since Stephen Kenny persuaded him to return from a spell in Northern Ireland at the beginning of the 2013 season.

The custodian of the league’s most miserable defence for the second year straight has developed a knack of popping up to score important goals, adding six this term to the eight achieved in 2014, and at 28 has the bulk of his peak years ahead of him.

A slightly left-field choice considering Pats’ documented defensive troubles and having been deployed for much of the season at full-back, but Desmond has been the one constant in the Saints’ defence this season and a key part of the ten-game unbeaten that ultimately secured European football for Liam Buckley’s side, as well as an EA Sports Cup trophy.

Desmond’s class and versatility has, along with fellow Saint Sean Hoare, earned him a deserved spot in the under-21 set-up, and it would be little surprise to see the former Newcastle United and Shelbourne player earn a contract at a higher level in the coming months.

One of the stories of the season has been the remarkable performance of Keith Long’s Bohemians, a fifth-place finish an outstanding finish for a side many predicted to struggle when manager Owen Heary left, taking a handful of the club’s brighter lights, to the full-time set-up at Sligo Rovers.

The contrasting fortunes of the two clubs has been striking, as has the uptick in form for a player who spent the two preceding seasons as a bit-part player at St Patrick’s Athletic. Fitzgerald’s solid defending and strong reading of the game combine well with a wicked left foot, and his excellent set-piece delivery has been arguably Bohs’ best attacking outlet all year.

The obvious inclusion. The league’s leading light over the past two or three seasons raised the standard once again in 2015, adding a haul of 25 goals to his game – equalling the Premier Division record set by Glen Crowe and Jason Byrne and the most ever for a non-striker.

The arrival of Ronan Finn during the winter has allowed Towell to adapt his role from straight attacking midfielder to a more fluid role between the lines of attack and defence. Towell has become a more complete player as a result and is all but certain to win the PFAI Player of the Year award many felt he should have won last year.

The inclusion of two players from the fifth-placed team may seem odd on first viewing, but it’s testament to the blossoming of this Bohemians team, and the heartbeat of Keith Long’s squad has been the indefatiguable Lopes.

The Dubliner has played a captain’s role since stepping into the breach following Derek Pender’s early-season injury, playing in virtually every position across the back and midfield, typifying the positional and tactical flexibility that brought the Gypsies within 90 minutes of snatching an unlikely Europa League spot.

Like Lopes, Tallaght native McCabe has spent much of his season filling in holes for his team, eventually making the central midfield berth his own when pressed into action when Keith Fahey and Stephen McPhail found themselves injured for large portions of the season, including the duration of the Hoops’ moderately-successful Europa League campaign.

Having spent much of his career deployed as a wide midfielder, McCabe’s technique, aggression and calm passing game has seen him adapt so effortlessly to a central role that it’s difficult to imagine him anywhere else next season.

It was touch and go for a long time whether the top scorer in Galway’s successful promotion season would get clearance to sign up for the Tribesman for their first season back in the top flight, but the New Yorker was eventually granted a work permit.

Galway struggled at times due to injury depleting their already small squad, but Dunne kept faith with his positive style of football and Keegan rewarded him by once again topping the goalscoring charts out west with 12.

There was little fanfare and less surprise still when former Newcastle United trainee Brandon Miele picked up Rovers’ Player of the Year gong, having worked his way from the fringes of the first-team squad to become inarguably the Hoops’ most influential player by season’s end.

Miele’s excelled all across the attacking midfield line, bagging 11 goals – second only to striker Mikey Drennan – in a season when Pat Fenlon’s side have struggled for goals up front with Danny North injured for the majority and Drennan contributing just one in the second half.

When Limerick announced the signing of Faherty shortly before the season commenced, few would have tipped the Galway man to make a huge impact having rarely been prolific during spells with Galway United and St Patrick’s Athletic. That was born out by Limerick’s dreadful early-season form that saw them luckless in front of goal and taking just six points from their opening 16 games.

The second half of the season saw Martin Russell’s side rejuvenated, and a massive factor in that was the form of Faherty, who transformed himself into the league’s most lethal finisher, while his strength and ability to hold the ball up became key to the more pragmatic style that may yet result in the most dramatic of zombie ressurections ever to grace this league.