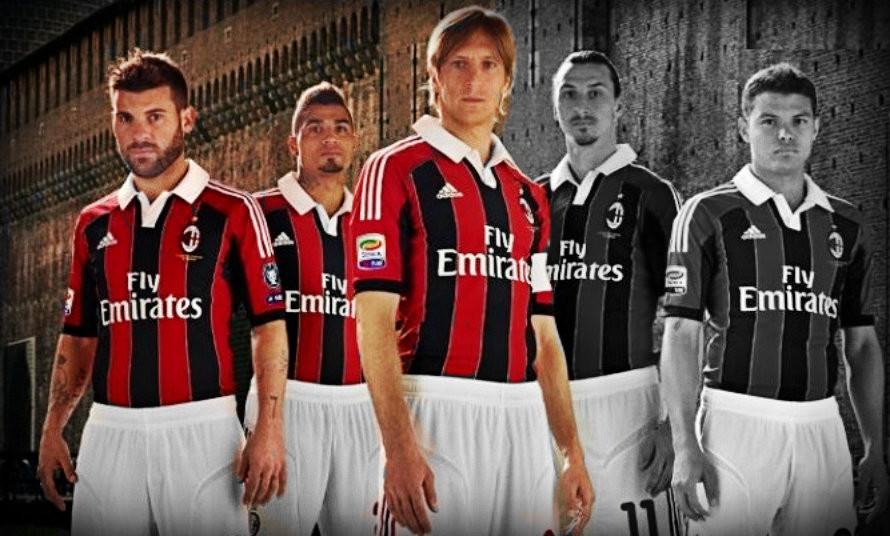 Inevitably, there will be those who will point to June, 2009: the moment when Milan’s talisman and decade-definer, Kaká, departed for Madrid for €68.5 million, but then went on to badly suffer with environmental assimilation (accentuated by the cheaper and younger Mesut Özil ‘s near-instant brilliance), a loss of form and a horrible run of knee injuries.

Without the ironic prospect of Silvio Berlusconi yet again (Kaká’s plight echoes that of Andriy Shevchenko in 2008/2009) attempting to bring back one of his many figli adottivi, Berlusconi, and indeed Milan’s vice-president Adriano Galliani, will not be able to pull out an eventual trump card signing like Zlatan Ibrahimović (one summer later, along with Robinho) to ease fans’ concerns. In actual fact, such are Milan’s crippling finances, a still-inhibiting wage bill and Berlusconi’s flagging influence amid the shadow of the debt-focused composite of Fininvest, spending any of the €65 million (Berlusconi claimed that Milan will save a total of €150 million in two years, owed to wages, from the departures) they claimed from PSG for Ibrahimović and Thiago Silva is not on the club’s agenda.

While this may seem a shock in itself, two even more surprising elements arise from this. Firstly, the writing was long on the wall and Milan have recorded five consecutive financial losses since 2006, back when they made an exceptional profit owed to Andriy Shevchenko’s £30 million departure to Chelsea; and, secondly, Galliani, who, predominantly, handles Milan’s transfer affairs, could have sold Thiago Silva to PSG for €50 million just two weeks earlier – which may have led to a fairly content Ibrahimović remaining as Milan’s poster boy and billboard adorner for at least one more season. Given that Milan hiked Silva’s wage and paid his agent significant fees in this interlude, the chaos (one of Milan’s precious non-EU slots was immediately allocated to the nineteen-year old Brazilian goalkeeper, Gabriel, and thousands of season tickets have been refunded due to ‘unforeseen’ player sales) and indecisiveness that has gripped the once shrewd (poached Marco van Basten from under the noses of Internazionale in 1987, for example) Galliani is clear for all to see.

Without either of Ibrahimović or Silva leaving, Milan would have had a less dramatic cull – Alessandro Nesta, Clarence Seedorf, Gennaro Gattuso, Mark van Bommel and Filippo Inzaghi also went on to depart this summer – and a degree of domestic competitiveness could have been maintained. After all, the past two seasons have, arguably, been the greatest consecutive campaigns for Milan in all competitions since 2002/2003 and 2003/2004. Despite just the solitary Supercoppa Italiana (2011/2012) and Serie A (2010/2011) trophies, Milan recorded consecutive Coppa Italia semi-finals in their greatest domestic cup performances for eight seasons; and, despite near-catastrophic stage-fright and undoubted negativity against Arsenal and Barcelona on 6 March, 2012 and 28 March, 2012 respectively, Milan performed admirably in reaching the quarter-finals of the Champions League for the first time in five seasons.

However, what has made this summer so traumatic is that while the release of Andrea Pirlo was somewhat understandable in the summer of 2011 – with the playmaker not fitting the rigid mediano framework Massimilliano Allegri craves and commanding a near-club record wage despite numerous injuries in 2010/2011 – Ibrahimović and Silva, like, incidentally, Kevin-Prince Boateng, were at the forefront of all of Milan’s success between 2010 and 2012. Sure, it is no surprise that Milan could not claim similar fees for the criminally inconsistent Robinho and Alexandre Pato (in part owed to the intense loyalty of Berlusconi’s daughter, Barbara, and her fraternising with the twenty-two year old), but to lose such position-defining players on the field and in the dressing-room is an aberration and encapsulation of just how far the seven-time European Cup winners have fallen.

After all, Ibrahimović is an undoubted domestic goalscorer, who has netted a brilliant 189 goals in 362 league games in four different countries. Winning nine titles (technically seven due to Calicopoli) in the process, Ibrahimović, in ways, matured as a footballer at the Rossoneri. Coinciding with the growing influence of his elder wife, Helena Seger, and his embracement of fatherhood with his two sons, Maximilian (five) and Vincent (four), leadership, responsibility and tactical ingenuity have become hallmarks that were not associated with Ibrahimović before his time with Milan. From this, in 2011/2012, he stepped up to the mark to enjoy, arguably, the most impressive season of his career. Playing as a deep-lying striker, while not technically as a number ten, the Swede’s hold-up play, vision, technique, composure and ball-playing ability were all harnessed to arm him with one of the most unique forward arsenals in world football.

Subsequently, Ibrahimović began enjoying his football again (claimed in October, 2011 that “football no longer burns inside me”) – netting a personal career best of thirty-five goals and fourteen assists in forty-four games for Milan last season – and, signalling that the thirty-one year old is far from finished, he had the best international tournament of his career with Sweden at Euro 2012. So, while still, undoubtedly, flippant, Ibrahimović’s comments at his opening press conference as a PSG player on 18 July were telling:

I don’t see any future in Italy. What happens there is their own problem. The future is here [France] and I’m here now. 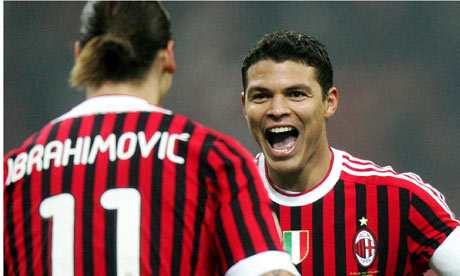 Silva, likewise, is among the world’s greats in his position and given that Milan ‘made’ him as a European footballer – following injury-blighted European spells with Porto and Dynamo Moscow – his departure is just as regrettable. Possessing the marshalling, ball-playing ability and composure that could well go on to even eclipse Lúcio’s exploits, Silva is simply irreplaceable in today’s climate, where names such as Mats Hummels are now long out of Milan’s price range. Perhaps, though, outsiders should have predicted this decadence. Firstly, while Galliani and Berlusconi have been keen to ‘nobly’ shroud Ibrahimović’s and Silva’s moves in being owed to complying with Financial Fairplay or the players’ greed, Milan have long lost their place amongst Europe’s elite. In the wider scheme – in comparison to the likes of Manchester United, Real Madrid, Barcelona and Bayern Munich – it can be argued that this is owed to Milan’s failure to consistently pinpoint faraway marketing opportunities with decade-long pre-season tours to the Far East or campaigning for a breakaway television deal that could be monopolised.

However, a failure to consistently sell-out the San Siro and keep up with infrastructural modernisation (the likes of Juventus, Bayern Munich, Arsenal, Manchester City and, eventually, PSG) is what, ultimately, will cost them. From this, Financial Fairplay may prove a benefit in the long run, with its “exceptional items”, if Berlusconi seeks the ultimate legacy: a new stadium (Moratti and Internazionale are embarking on a similar venture with China Railway 15th Bureau Group Co., Ltd, as to buy out the San Siro outright is implausible) and a review of a semi-flagging, stagnating, sentimental-driven youth set-up. Still, the short-term requires consistent Champions League qualification and given that there are now only three spots (two automatic) available to Serie A – not to mention Serie A regaining serious competitiveness, with Udinese, Napoli, Juventus, Internazionale and Roma all vying for Champions League football – Milan are in serious danger of failing to strike a delicate balance between necessary success and financial sustainability.

This means that it will be incredibly difficult for Milan to qualify for the 2013/2014 Champions League, as they possess, arguably, the weakest XI of the above-mentioned and, even with the loan signing of Cristián Zapata and a potential loan deal for Alessandro Matri/Marco Borriello/Giuseppe Rossi, Milan will still have to rely heavily on the often-flaky Philip Mexes, Riccardo Montolivo and Pato. Therefore, the future for Milan looks bleak – with Carlo Ancelotti and Paolo Maldini’s respective departures in 2009 a mere watershed moment – and it is hard to see what financial model the club will adhere to. Having been the first real sugar daddy in world football from his helicopter arrival in 1986, Berlusconi is having to adapt to a footballing world where loyalty (the likes of Nesta, Gattuso, Seedorf and Pirlo never had worthy heirs) is no longer the ultimate key to success. Subsequently, with Financial Fairplay, it is too late to follow the Chelsea, Manchester City and PSG model – let alone without any funds to do so – and, on the other end of the scale, the Vismara producing three or four first XI Academy products within the next two years seems incredibly unlikely.

Perhaps, the 5-1 friendly defeat to Real Madrid on 9 August, 2012 said it all, with Milan putting out a full-strength XI from the off but José Mourinho affording a rest to the likes of Alvaro Arbeloa, Sergio Ramos, Xabi Alonso and Karim Benzema. Although Galliani was quick to criticise Allegri’s decision to, naturally, utilise much of his squad and make nine changes throughout the match, perhaps, there was an element of ‘noble’ self-infliction in Allegri’s actions in revealing such a weak squad in comparison to Milan’s once-equals – which Galliani, inadvertently, touched on in his scathing criticism post-match:

Can you believe that? I am really p***ed. You simply cannot make nine changes in a game against Real Madrid. The coach has made some serious mistakes and I will tell him just that. We are playing in New York in front of 60,000 people and all eyes are on this game.  I don’t care that Mourinho made a lot of changes as well. Have you seen Madrid’s bench..

Therefore, Champions League qualification has never been so important but with Napoli, Roma and Internazionale certainly progressing rather than regressing (admittedly, Udinese have lost key personnel like Samir Handanović, Mauricio Isla and Kwadwo Asamoah but similar losses in 2010/2011, remarkably, did not hinder them) in the past twelve months, Milan look likely to enter an unprecedented era of desperate maintenance (Galliani, delusionally, commented that he was “like Billy Beane [Moneyball]”) and eventual decadence under Berlusconi.