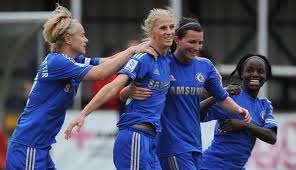 When the FA dreamt up the vision of the WSL the focus undoubtedly was to expand both competitiveness within the Women’s game and the marketability of the product.

With just two fixtures remaining of the current campaign, a title race which separates the top three by just two points – a remarkable statistic considering the league itself only comprises eight teams – indicates that the remodelling – at least in terms of competition at the top – is reaping rewards.

Chelsea currently carry the eight ball, although defending champions Liverpool have ominously moved to within a point, whilst a torrid recent run has seen once long time leaders Birmingham slip two points off the pace.

Birmingham – Champions League semi-finalists last year – appeared destined for a maiden crown, yet a sequence of three defeats in five – including a potentially pivotal loss to Liverpool last time out – has left them unseated from the summit. By contrast both Liverpool and Chelsea can boast intimidating form, with the former having acquired 10 points from a possible 12 and the latter having won six of eight in rising to the apex. However having reached top spot Chelsea were last week stunned by a buoyant Notts County – highlighting the competition’s growing unpredictability.

Birmingham themselves travel to Manchester and even accounting the indifferent form of Nick Cushing’s team that signifies a stiff test for a side who can boast just a single win in five outings. Theoretically it is not beyond the realms of possibility that Chelsea could be crowned champions by the conclusion of the weekend, given Birmingham’s testing trip and that Liverpool are visiting an Arsenal side who in recent weeks have displayed signs of recapturing their mojo.

Lifting the trophy would represent a substantial feather in the cap for Emma Hayes – the only female coach in the division. Chelsea have undoubtedly been aided by a significant recruitment drive – Katie Chapman, Laura Bassett and Gilly Flaherty arriving alongside numerous European recruits – nonetheless the way Hayes has transformed the parts into a cohesive unit in minimal time deserves immense credit. Chelsea have unquestionably benefitted from the new systems inception, given it has made their shopping spree viable and thus allowed the possibility of an extraordinary rise from second bottom last year to champions a year later.

Liverpool will however hope that the jitters Chelsea displayed in falling victim to Notts County are a sign of things to come. At the same time nerves should not be an issue for Matt Beard’s side considering for their positive experiences last year, with recent victories over both Chelsea and Birmingham vindication of Liverpool’s proficiency in crunch situations – although there remains a nagging feeling that a disappointing draw with neighbours Everton a month ago could in the long run prove a terminal blow.

The renovation of the female game in England has undoubtedly changed dramatically the landscape, however for all the winners the WSL’s inception has generated on the other side of the coin it has also been detrimental to the old guard – with the likes of Manchester City and Chelsea able to cherry pick the most sought after talent from previously established clubs.

Arsenal – for so long the dominate force as a return of 11 titles in 12 years between 2001 and 2012 outlines – will for an unprecedented second year running miss out on Champions League football. Several key departures – including the earlier mentioned duo of Flaherty and Chapman alongside Steph Houghton – have severely hindered English football’s long time gold standard, although recent weeks have at least represented a potential changing of the tide with Arsenal experiencing just a sole defeat in six.

With new coach Pedro Martinez Losa enjoying a fruitful start to her reign and the promising development of several young players, the horizon suggest Arsenal’s spell in the shade could only be temporary – that is of course assuming the vultures do not further poach their prized assets.

The future unfortunately appears less bright for Everton, who suffered the ignominy of becoming the first side ever relegated from the top tier of women’s football. The toffees – for long periods key players at the forefront of women’s football – have been decimated by persistently losing personnel to ambitious rivals, with this season’s departures of Toni Duggan and Jill Scott seemingly a bridge to far.

Duggan vacated Merseyside for the Manchester City revolution, a project which some would argue has failed to fully meet its debut expectations given the citizens currently sit sixth – nonetheless City will claim for their debut season the primary objective of establishment has been fulfilled. At the same time victory in the Continental Cup final would lay down a significant marker of their arrival.

It wouldn’t be false to suggest the current WSL has been the most compelling to date – although the lack of a genuine relegation battle is a point of exasperation. The concluding furlongs have the potential to only further cement that status and whilst Chelsea are title race favorites, where the trophy resides come next Sunday remains up in the air. Further to that of the trophy chasing trio, one will be left with the frustration of not only missing out on the ultimate goal but also the prize of Champions League football.

Whatever scenario does eventually infuse, if the season to date is anything to go the concluding chapter is not to be missed.