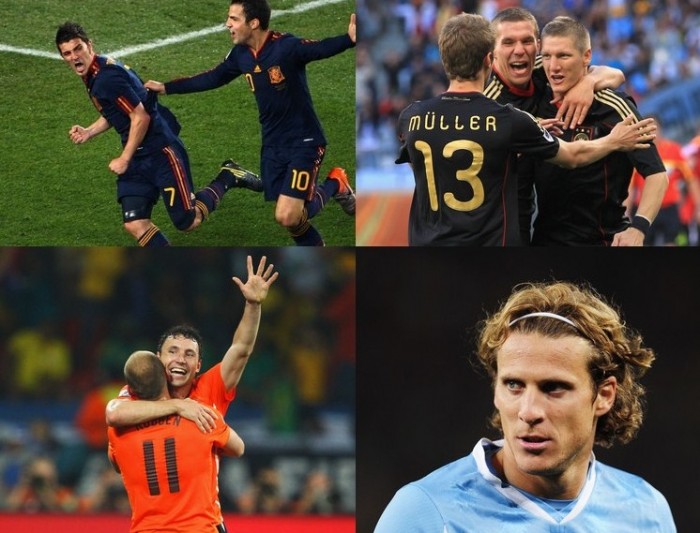 Both sides made this semi-final tie in contrasting circumstances. Holland shocked Brazil by coming from behind to win 2-1, in a game that didn’t personify the Total Football and Samba stylings both nations are known for. Uruguay, via a controversial last minute handball off the line from Luis Suarez, beat Ghana on penalties to go onto their first World Cup semi-final since 1970 where they hope to emulate the sides that launched the World Cup back in the early 30s.

Both sides have been hit with suspensions before the game. Uruguay, of course, are without Suarez after his last second sending-off against the Ghanaians in the quarter-final. Despite his absence, the Ajax forward is already a hero in his home nation after “taking one for the team” against the Africans, as it were. Oscar Tabarez is also without left back Jorge Fucile, the Porto defender has been fantastic throughout the tournament so Martin Caceres may fill in at left back. The Dutch, meanwhile, are without Nigel De Jong and Gregory van der Wiel who both picked up two yellow cards throughout the competiton. It’s ridiculous that you can miss such an important game after picking up two bookings in the space of five games, and 450 minutes of football. Joris Mathijsen, who missed the Brazil game through injury, has been declared fit and will replace Andre Ooijer at centre-back.

Uruguay changed their system against Ghana, instead of the 4-3-3 formation that everyone was raving about they played something of a 4-4-2 . Oscar Tabarez has already named his side well in advance as he usually does, and in comes will have to stick with a similar set-up with Edinson Cavani, a target for some big European clubs, and Diego Forlan up front. It is important that the Atletico Madrid forward, one of the players of the tournament, steps up and ends his knockout-stage barren run.

Holland are in their first semi-final match since 1998 in France, and will be looking to make the final for the first time since the great sides of 1974 and 78, but this time – go one better and win out the competition. They’ll play a system exactly the same as the one that overcame Brazil – but Khalid Boulharouz and Demy De Zeeuw should replace the suspended De Jong and van der Wiel. All eyes will be on the outstanding Arjen Robben at right midfield, but don’t forget about the other attacking talent the Netherlands boast; Robin van Persie, who is due a goal, and of course Wesley Sneijder who’s inspired performance against Brazil helped them to victory.

Prediction: Uruguay 1-2 Holland. Yours? Tell us in the comments below. 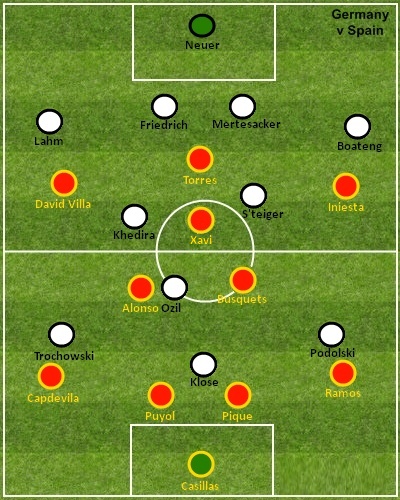 What a mouth watering clash eh? Germany have been in exceptional form, putting England and Argentina to one side almost without breaking a sweat and scoring eight goals in the process. Spain haven’t been on top form, but are winning nonetheless. They beat Paraguay by a single David Villa goal, reminiscent of the Portugal game in the last sixteen.

Much talk has surrounded both these sides. Everyone has been raving about Germany and the phenomenal tournaments the likes of Bastian Schweinsteiger, Thomas Mueller and Mesut Oezil are having – deservedly. Meanwhile much debate has centred around the poor performances of Fernando Torres, while top scorer David Villa scores all the goals. The likes of Xavi, Iniesta and Xabi Alonso aren’t having the most outstanding tournament, either, in comparison to the forementioned German players.

Spain have no suspension or injury worries, however – if you believe some reports – David Silva, the new Manchester City player, may replace the struggling Fernando Torres in the side, meaning his former Valencia teammate Villa would play up front instead of the left sided position he’s been playing in.

Germany are without Thomas Mueller, their top scorer with four goals, after he picked up two yellow cards in the tournament – and he should be replaced by Hamburg midfielder Piotr Trochowski on the right of the field.

Germany are in their third successive semi-final game, and reached the final in 2002, losing out to Brazil. They’ve been in seven finals, a win tomorrow and it’ll be eight. Spain, meanwhile, are aiming for their first ever final place. The closest they’ve gotten in previous World Cups was fourth place all the way back in 1950. But after their recent European Championship success with pretty much the same side, Spain could be writing history.