For the first time as an independent nation, Slovakia make an appearance at the World Cup finals. Perhaps made sweeter by the absence of their neighbours, the Czech Republic, who were ranked second in the FIFA World Rankings just four years ago.

If the Slovaks are to make an impression on this summer’s tournament, Marek Hamsik will be crucial to the fortunes of Vladimir Weiss’ side.

Hamsik, 23, is a playmaker and is often given free licence to influence the game just behind the forward line for both club and country. Physically strong with an awareness to be in the right place at the right time, comparisons have been drawn with Manchester United star Paul Scholes. The likeness could also be attributed to the defensive side of Hamsik’s game which is certainly not his strong point.

His precocious talent was recognised early on in his career as he joined Serie A side Brescia from Slavia Bratislava (where Hamsik had only made six appearances) in 2004. Despite being relegated to Serie B in his first season Hamsik stuck around and helped Brescia to promotion back to Serie A.

Hamsik’s performances were noticed by Napoli and the starlet hasn’t looked back since after signing for €5.5m. Last season Hamsik, whose personal hero is Pavel Nedved, netted 12 goals from his position just off the striker, raising his stock further.

Solvakian coach Weiss has identified Hamsik as an integral part of his World Cup plans as his team look to overcome Italy, Paraguay and New Zealand to reach the knockout phase.

“He is a world class player,” said Weiss. “With Marek in the team the players’ heads don’t go down and we’ve turned a few games round because of that,” he added.
The Slovakian young player of the year hasn’t been afraid to turn his club form to international form either with eight goals from 30 caps so far.

If Slovakia do manage to progress its more than likely Hamsik’s value will soar, making it difficult for Napoli to hold on to their star player with Europe’s elite bound to be interested. 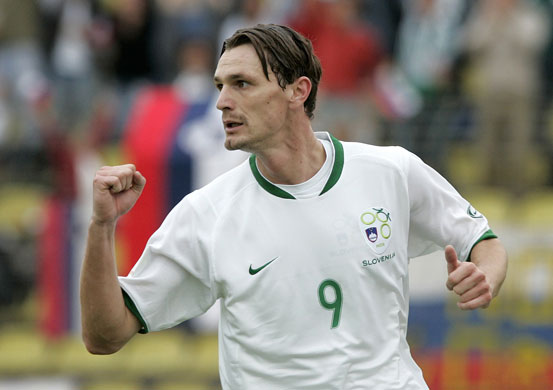 While that victory will give them confidence they can progress to the second round in South Africa, much will depend on the striking form of Milivoje Novakovic.

The reliance on Novakovic to provide the goals for Slovenia is emphasised by the fact he is the only member of the 23-man squad to have reached double figures for his country, scoring 16 goals in 38 internationals. In fact nobody in the current setup comes close to Novakovic’s scoring record, with two players next in line on four goals.

Although the 31-year-old spent much of his career in the minor European Leagues, a move to the Bundesliga in 2006 with FC Koln has proved that Novakovic has the credentials to succeed in one of Europe’s top leagues – 51 goals in 108 games certainly confirms as much.

However, Novakovic was stripped of the captaincy for the German outfit in 2009 when he had arrived late back from international duty, following Slovenia’s qualification for the World Cup.

At 6ft 3in tall, the striker has the ability to hold the ball up for his team and is known for a great first touch. The forward’s dead ball capabilities were also recently highlighted with two well-taken free-kicks against New Zealand.

His brace highlighted the importance Novakovic holds for his nation’s chances this summer, but Slovenians will be relieved after an injury had put his tournament in doubt.

The striker added: “It is much better but not yet perfect. But there is no excuse.

“We head to South Africa proudly. Our goal is the second round, and we will try to achieve that.”

His team may hope to reach the second round but ultimately the form and fitness of Novakovic could dictate whether Slovenia can advance through a group containing England, USA and Algeria.