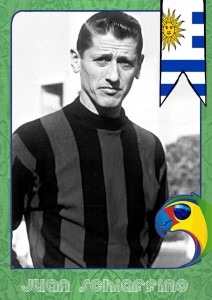 Juan Alberto Schiaffino Villano, commonly known as ‘Pepe’ was born on the 28th Jul 1925 in Montevideo.  Growing up, Pepe would play football in the parks of Pocitos before joining the youth team of local neighbourhood team Palermo. Moves to Olympia and Nacional followed before at 18 years of age his brother – Raul – took him to Peñarol. [Raul was already at Peñarol – a striker in a brief but brilliant career before injury struck and the brothers would play a few times together].

Peñarol won the 1944 and 1945 title with Raul top scorer but it was Pepe that would become an integral part of the Manyas. In 1949 as part of La Escuadrilla de la Muerte attack, Peñarol would sweep all before them in winning the title, the team becoming known as La Maquina del 49. [The season included the strange Clásico de la Fuga, in which rivals Nacional fearful of a heavy defeat refused to show in the second half].

La Maquina del 49 with Schiaffino now a key player would form the basis for the Uruguay team that went to World Cup in Brasil the following year. With teammates Varela, Míguez and Ghiggia, Schiaffino made his mark at inside left, his control, vision and left foot taking La Celeste to World Cup glory in a match that still haunts Brasil to this day – The Maracanazo, Pepe soring the equalizer before Ghiggia’s winner.

Schiaffino would win the league title in three of the next four seasons with Peñarol and was again selected [with Varela and Míguez] for the 1954 World Cup where La Celeste would finish fourth. Pepe scored in the opening win against Czechoslovakia then came Scotland. Shiaffino was the puppet master, pulling the strings as Uruguay ran out 7-0 winners to set up a quarter final against England. Schiaffino scored a controversial third in a 4-2 victory. The semi-final saw Uruguay take on the magnificent Hungary. With fifteen minutes to go Uruguay were 2-0 down when Schiaffino took charge, setting up two goals to bring the scores level, before Hungary triumphed in extra time.

Italy came calling again but this time Peñarol could not refuse a then record fee from AC Milan. Schiaffino departed where Milan ensured he took dual citizenship to surmount the “two foreigners” rule. Six years followed in Milan winning three Serie A titles, the Latin Cup and runners-up to Real Madrid in the 1958 European Cup final. 1960 saw a move to AS Roma for the final two years of his career winning the Fairs Cup in 1961.

Schiaffino scored over 140 goals in his career but despite being an inside forward it is perhaps not his goals for which he is remembered. Rather it is for his control, his assists, his ability as a creator rather than a finisher. Schiaffino was a master of vision, master of the key pass. As Cesare Maldini once said:

Schiaffino has a radar in his brain.