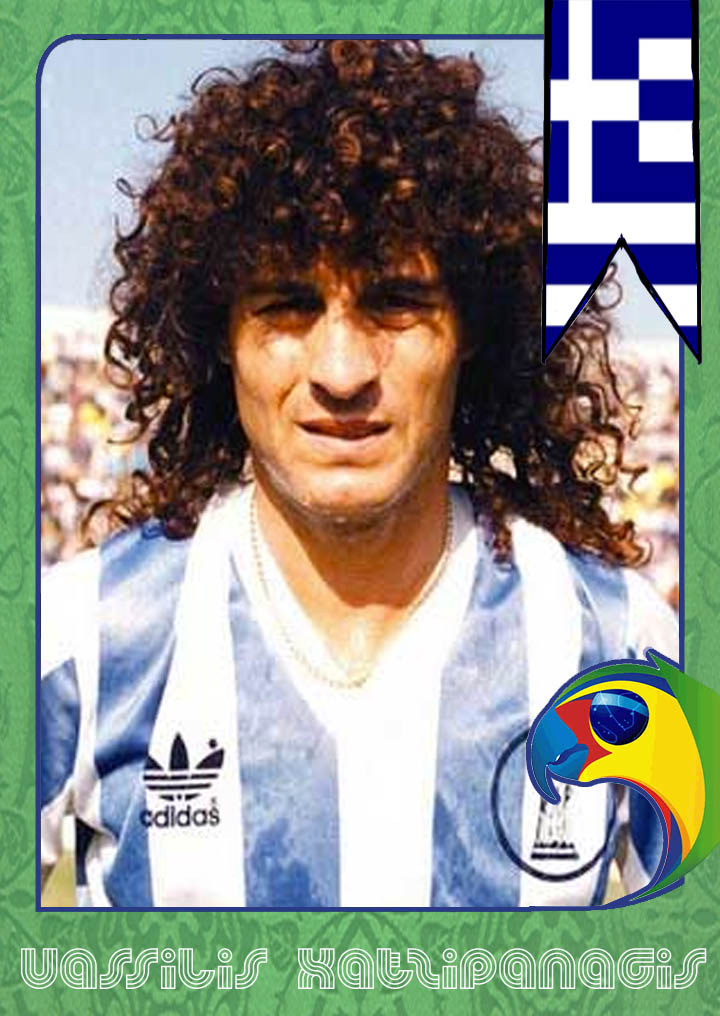 A 19 year career that brought a modest three trophies and one cap at senior level [in a friendly] may raise the question as to why Hatzipanagis should be considered a great. One look at clips of him dribbling will give the answer. Hatzinpanagis had the hair of Kevin Keegan and the feet of Maradona, fans called him ‘the footballing Nureyev’.

A son of political refugees from the Greek Civil War, Hatzipanagis was born, October 1954 in Taskent in the USSR. He was spotted at the age of 17 and quickly signed by local team FC Pakhtakor. Maturing and improving he helped Pakhtakor to the Soviet First League [2nd Division] title. Strict rules required Vasilis apply for Soviet citizenship and on being granted he soon appeared at U19, U21 and in 1975 qualifiers for the following years Olympics. According to experts by this time Hatzipanagis was considered second as left sided attacker only to Oleg Blokhin.

However, times were changing. The “Reign of Colonels” military dictatorship in Greece had ended in 1974 and the Hatzipanagis family like many exiles headed home. Vasilis signed for Iraklis Thessaloniki FC in 1975 and stayed for 16 years. His first season would see Iraklis win Greek Cup and Vasilis play for Greece in a friendly against Poland. It would be his only appearance for the Ethniki, Fifa ruling that his appearances for the USSR meant he was ineligible to play for Greece. Despite Soviet support for Vasilis, apparent lethargy by the Greek authorities meant the Fifa ruling remained unchallenged.

Vasilis was adored by the Iraklis fans who would pack out the Kaftanzoglio stadium to watch their idol and the Hatzipanagis Era was probably Iraklis most prominent period in modern Greek football. Other, bigger clubs tried to sign Vasilis but Iraklis would never negotiate. Vasilis’ contract was said to be heavily in the clubs favour [he actually did win a contract dispute against the club in court but the victory seemed ignored]; the club were also mindful given their precarious financial position of the impact on the fans of selling their idol. Vasilis would go on to win a Balkan Cup in 1985, but Iraklis highest finish in the league was third and after another 1st round exit in the Uefa Cup in 1990, Vasilis retired.

To watch Vasilis is to marvel. His pace, balance, dribbling, the ability to stop and turn on the proverbial sixpence – all left defenders flailing. The ball really does appear glued to his feet.

As part of Uefa’s Jubilee Celebrations, the Hellenic Football Federation named Vasilis Greece’s Golden Player of the last 50 years. Vasilis whilst appreciative did also say:- “I regret not having been able to wear the Greek national jersey more than once. And I regret not having made a career abroad. I would have liked to play in a better league, to have enjoyed football at that level. If I could turn back the clock, I would do some things differently.”

A victim of circumstance and injustice, Hatzipanagis would arguably have dominated on a much larger stage. Its football misfortune he never got the chance.

One thought on “World Cup Legends: Greece and Vasilis Hatzipanagis”