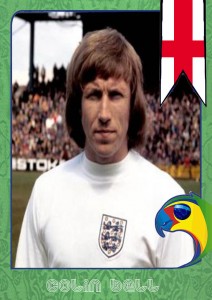 ‘The King of the Kippax’ was born in Hesleden, County Durham in February 1946; a youth player with Horden Colliery Welfare before joining second division Bury, making his debut in 1963. Bell would go on to make 10 appearances in his first season. The following year at just 18, he would establish himself as a regular, making 45 appearances in all competitions, scoring 13 goals in the process. Bigger clubs had started to notice.

The next season [1965-6], would see another 10 goals in 31 appearances as well as being made captain before Manchester City came knocking. Bell moved to City helping them secure the Second Division Championship. City consolidated their position back in the first division. Bell in his first taste of top flight football played in every City match, making 50 appearances in total, scoring 14 goals – an excellent return for a central midfielder.

Then came the 1967-8 season. City tussled with neighbours and rivals United all season before clinching the title on the final game of the season with a 4-3 win at St. James Park. Glory – City’s first silverware since 1956; the goals of Neil Young, Francis Lee and Mike Summerbee and wing play of Tony Coleman. The “Ballet on Ice” in which at a snowbound White Hart Lane, City routed Tottenham with style and panache.

Behind it all – Colin Bell, – ‘The King of the Kippax’ notching 43 appearances and scoring 17 goals. City looked on the verge of something special with a special player. Bell’s performances had attracted the attention of Alf Ramsey and 11 days after the Newcastle match, Bell made his England debut, dominant in a 3-1 friendly win over Sweden.

City would win the FA Cup the following season and in 1969-70 become the first English team to win a domestic and European trophy in the same season beating West Brom in the League Cup and the European Cup Winners Cup with victory over Górnik. In the league however [apart from 1971/72] City struggled over the following years, regularly finishing mid-table. Throughout though Bell remained consistent –with appearances and goals.

Bell was named in the 1970 World Cup squad but Ramsey – struggling with the concept of substitutes – using him sparingly. With Bobby Charlton’s retirement, Bell cemented a position in midfield. The next few years were frustrating at club and international level with City stagnating and England’s failure to qualify for the 1974 World Cup.

The 1974-75 season saw an ever-present Bell in tremendous form for club and country with 45 appearances and 18 goals for City mixed in with international wins over Czechoslovakia, West Germany and Scotland. Sadly the following season in November injury struck at Old Trafford. The injury was so serious it effectively ended Bell’s career. Comebacks were attempted but never really successful.

Colin Bell was perhaps the most complete midfielder England has ever seen. Incredible stamina [hence the nickname ‘Nijinsky’], good defensively, a box to box midfielder with the ability to play a ‘killer’ pass and a goal scorer with a ratio better than many strikers.

Colin Bell was respected and revered by fans, players and media alike.